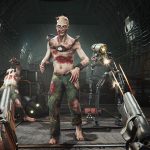 You are reading
Atomic Heart Confirmed to Run at 60 FPS

Despite its most recent delay in December, Atomic Heart is right around the corner. The long-awaited title just received some great news for fans who prefer to prioritize frame rates over resolution.

Developers Mundfish confirmed on their official Twitter account that their game will indeed sport a 60 frames-per-second (FPS) performance. Interestingly, the game will hit 2160p or 4K resolution in dungeons at 60 FPS. While the resolution will drop to near 4K levels when out and about in the game’s open world.

Solid 60fps, 4K in dungeons , and Dynamic resolution, mostly 4K at 60 fps in open world. Next gen of course

It’s still not yet confirmed whether there will be multiple video and performance modes. Perhaps the entire game will be locked at 60 FPS and the resolution will scale accordingly.

Note the developer did confirm that 60 FPS will only be available for current-gen versions of the game. So don’t expect 60 FPS if you’re on a PlayStation 4 or Xbox One.

Regardless, the game looks promising and brings back old Bioshock vibes, but with a Soviet Cold War-era twist to it. Be sure to check out our in-depth look at the game right here.

Atomic Heart is slated to release on February 21, 2023, on PC, PlayStation 4/5, and Xbox Series X|S and will be available day one on Xbox Game Pass.