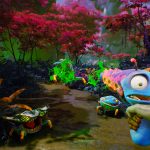 You are reading
Justin Roiland Has Officially Departed Squanch Games

The past few weeks have seen Rick & Morty co-creator Justin Roiland under fire for a wealth of allegations. The original controversy came to light when a news story was published detailing an alleged domestic battery charge from back in 2020. This did not stop here, as several women then stepped forward on social media sharing stories and screenshots of misconduct from Roiland. While there had been no official statements from Roiland on these allegations, things were certainly not looking good.

Earlier today, Adult Swim revealed that they had severed their connection with Roiland. As well as addressing that Rick and Morty will continue on without the former co-creator. This was followed up shortly by an announcement from Squanch Games that Justin Roiland had officially resigned from the studio just over a week ago. Squanch Games which many will know for the most recently released first-person shooter High On Life. The studio was founded by Roiland back in 2016 and has released 4 games in that time. With his departure, it will be interesting to see what the future holds for Squanch Games, as High On Life was a massive success for the studio. Could a sequel to High On Life be in the cards for the future? Only time will tell, but it is safe to say the studio will move forward and continue to support its titles.

What do you think of Roiland’s departure from Squanch Games? Let us know in the comments and don’t forget to check back for the latest gaming news and information.