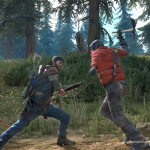 You are reading
Single Player Is The Vision For Days Gone

While it should come as no surprise to anyone Days Gone developer, Bend Studios, has not visioned a multiplayer facet to the upcoming title. This would continue the streak of many anticipated titles, such as Spider-Man for PlayStation 4 and God of War, to release without the addition of any multiplayer aspects.

An assistant technical designer that was recently interviewed at PAX East stated: “, We’ve put a lot of time into building the character of Deacon, and the other characters that you interact with and so that [multiplayers] isn’t something that we were really going for.”

Sony is well known for its superb single player experiences that have been released this generation and Days Gone looks to continue that trend. Multiplayer certainly could take prominent assets away from the game that would have potentially steered the final product into a completely different direction. It’s nice to know that Sony and its developers are willing to take the stand for the single player gamer and ensure more greatness.