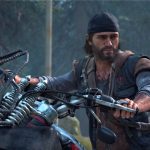 You are reading
Hands On With Days Gone At PAX East

At PAX, Lords of Gaming and Iron Lord Podcasts own Lord Cognito had the opportunity to talk with Jeff [null], an assistant technical designer to Days Gone to get an insight on Sony’s upcoming title. You play as Deacon St. John that was part of an outlaw biker group prior to the main events of the game. At some point, he ends up losing his wife and had to deal with the mental coping of his losses.

The game is said to feature dynamic weather systems that will change throughout the game. The weather will have effects towards not only vehicles but also freakers, the games name for the zombie-like enemy type, in the game. Some things that you may not have known is how important the player’s motorcycle is to the game, which will require you to scavenge to upkeep and upgrade your motorcycle. Not only will you be able to craft on your motorcycle, but crafting will be a key component in the game, bringing out the true survival nature as you are out in the world scavaging.

Jeff was also able to confirm that the team is running the game at 4k on the PlayStation 4 Pro with HDR support and running at 30 frames per second. It is also suggested that the main campaign will run roughly 30 hours, but the game is also full of many side missions that do not account for this playtime. Days Gone is slated to release on April 26th, exclusively to the PlayStation 4 consoles.

Be sure to check our other pieces during the Days Gone interview.