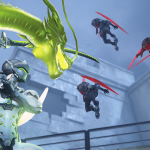 You are reading
Archives is Back! What is It?

It’s that time of year again (albeit a bit later than usual): the Overwatch: Archives Event is now live! For those of you out of the loop, let me answer some questions for you.

What is the Archives Event?

Archives is Overwatch’s annual, lore-driven event. It is the last event before the anniversary event in May and June, where each year brings a PvE (Player vs. Environment) game mode. Further, since each year brings a different Archive, the previous years’ modes are playable at this time as well. For example, Uprising was the first event (when it wasn’t called Archives). Players had to stop the robotic terrorist group, Null Sector, from attacking London. Lore-wise, Uprising was box cover hero, Tracer’s, first field mission. There is a mode that lets you play as any character, but the main mode consists of only four different heroes you can play as (Uprising had Tracer, Torbjorn, Reinhardt, and Mercy).

This year, we got a mission to capture another evil faction’s leader, Maximillian from Talon, in Cuba. This year, the playable characters are Tracer, Mercy, Genji, and Winston. This marks Winston’s first canonical Archives mode and everyone else’s second.

What do we get for playing?

Good question, as it’s not an Overwatch event without tons of event-specific loot. As usual, there are nine new skins for various characters, three are epic, and the rest are legendaries. Three new highlight intros have been confirmed, as well as a list of new voice lines and sprays. Overall, Blizzard has confirmed over 50 new cosmetic items and all past Archives cosmetics.

As with all Overwatch events, players will get event loot boxes with the event items instead of the regular loot boxes whenever necessary (ie leveling up, arcade loot boxes, etc.).