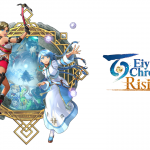 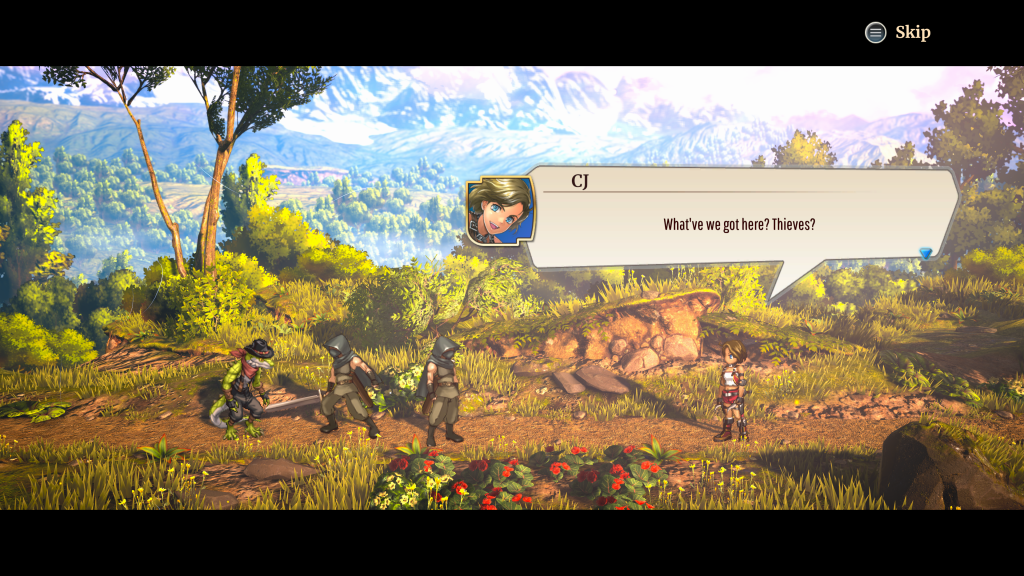 Eiyuden Chronicle: Rising is a 2.5D side-scrolling action-adventure game developed by Rabbit & Bear Studios. This game aims to be a “companion” title for the upcoming Hundred Heroes game next year. As it helps to build up the world and introduce some of its colorful cast of characters. But seeing as the gameplay is different than Hundred Heroes, are these the only things to enjoy in Rising? Or is there more to this than meets the eye?

A Scavengers Life for Me!

In Eiyuden Chronicle: Rising you will play CJ, a young scavenger who left her village in search of treasure. Arriving at the recently ruined town of New Neveah for the promise of treasure. Despite this simple goal, she gets wrapped up in the task of helping rebuild this town to gain access to an area where she can look for her saught after treasure. All while meeting people who will help her on her task. The first is Garoo, a gruff Kangaroo-man with a mysterious past. As well as the rapacious mayor Isha, with a tragic back story. 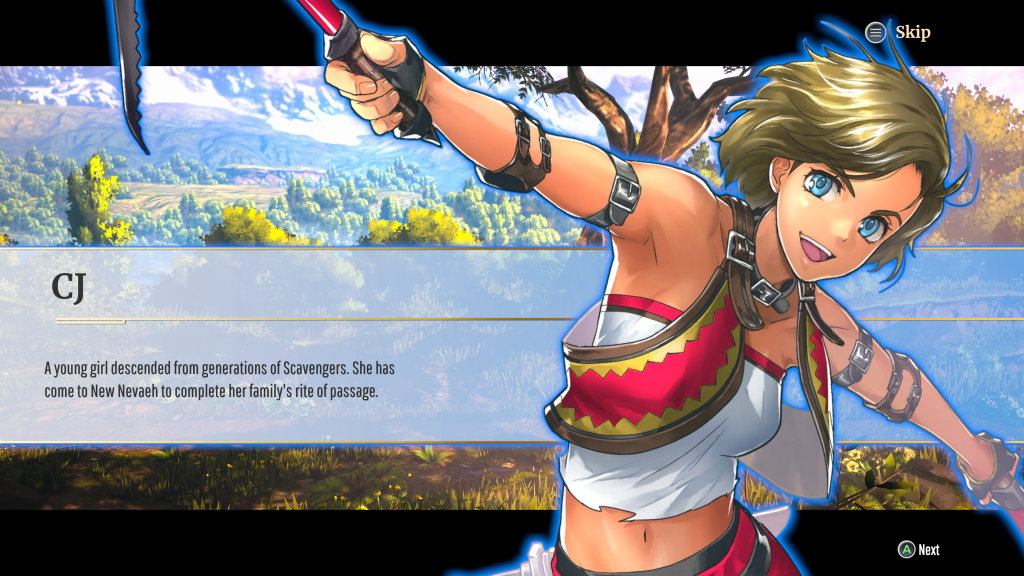 The three come together for similar goals as the story progresses, while the three work to uncover a dark mystery, which suffers from some tedium and pacing issues. The moment you arrive in new zones, progressing through them requires going back to New Neveah for various reasons.

Such as needing to recruit Garoo to destroy a cave-in at the Quarry. While also needed to help set up a farm and pasture randomly in the story. It felt jarring as I would have liked minor additions to the town to be side quests and not something that gets in the way of the main story.

But these breaks did let me ponder on discoveries or twists that I experienced during the main story itself. However, this as well as very long dialogue exchanges would be off-putting to me if it weren’t for the lovingly written characters and the dynamics between them.

The main trio, as well as side characters and even the NPCs, have great writing associated with them. They all have unique personalities, goals, and depth to them. CJ is honorable and at times too excited to get back to action. Garoo is wise and tough, always setting people back on track if they feel weak. As well as Isha being stern and cold due to her taking on the responsibility of being mayor. They even play off each other very well in cutscenes. 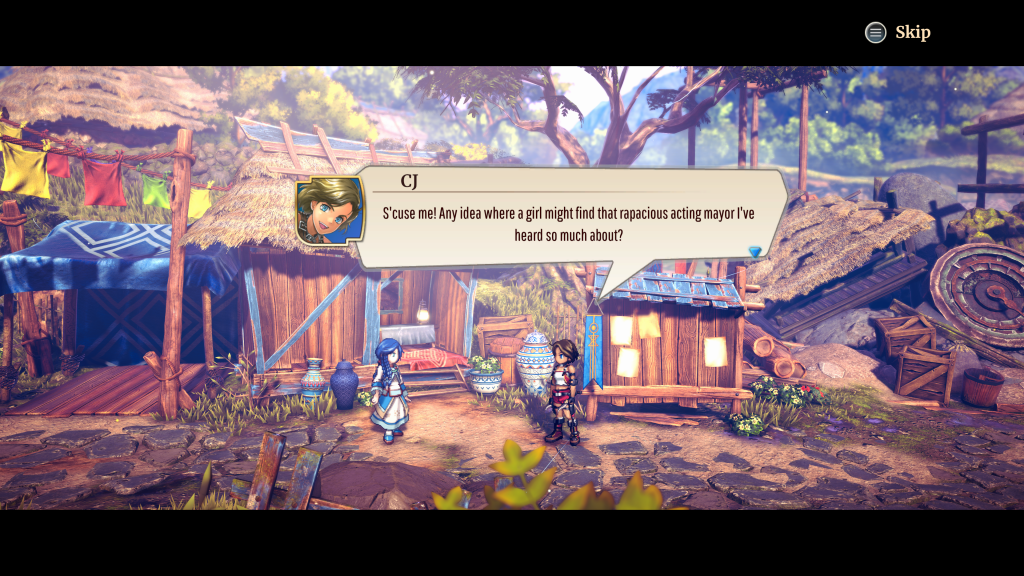 For example, in one scene where CJ gets insulted by someone. Garoo says to CJ “You gonna let her insult you like that?” and CJ responds with “I assumed she was talking about you!” Funny scenes like this are to be enjoyed constantly throughout, even with side characters, like vendors or just standard citizens. Where a side quest tasks you to get a knife for a woman and her response to CJ when she asks why she needs the knife is that there is “no reason, but hopefully, I don’t see my husband”.

Even though some of these scenes can go on for minutes, I enjoyed reading every bit of it. As it helped me get through some of the tedium and pacing issues of the plot. But between these very enjoyable cutscenes with great characters, is very fluent combat, deep RPG systems, and quite a lot of side content.

The combat in Eiyuden Chronicle: Rising is an interesting take on the standard beat ’em-up combat. CJ, Garoo, and Isha all have attacks that differ from one another and serve a unique purpose towards enemies. Also, they are assigned to specific buttons. CJ is light attacks that are multipurpose, Garoo uses heavy attacks that break standard enemy and boss shields. While Isha uses magic that instantly pops mage enemy barriers from mid-range as opposed to CJ and Garoo fighting in close range. 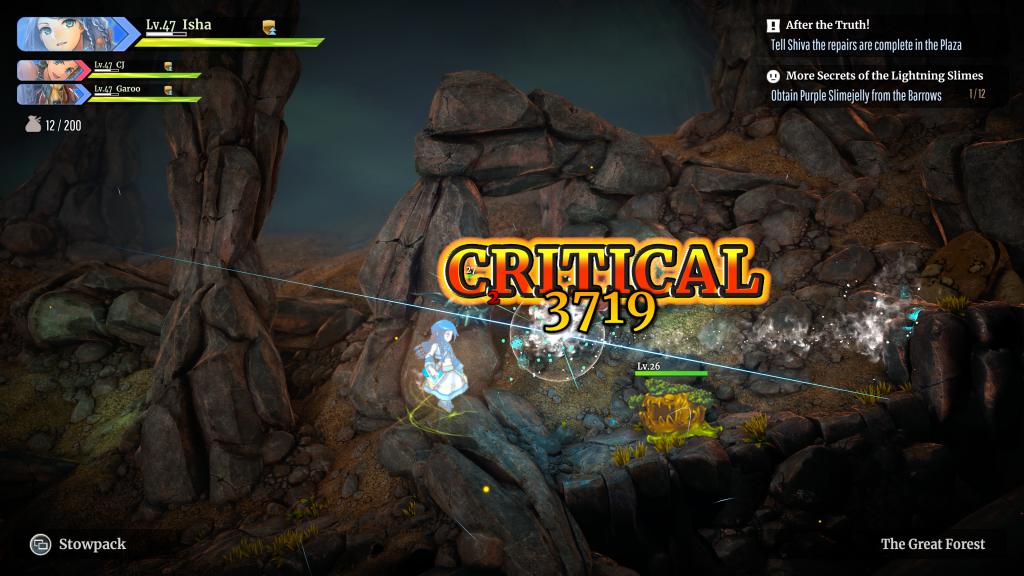 (Explanation below refers to the usage of an Xbox controller.)

Depending on the enemies you are fighting, you can swap between all three characters at the press of a button. CJ is assigned to the X button, Garoo is assigned to Y, and Isha is assigned to the B button. Swapping to another character instantly after attacking initiates a “Link Attack”. These freeze enemies in place so you can do a follow-up attack and you can do up to five of these in a row. These are especially useful for bosses or heavy-hitting enemies so you can’t take damage from them while dealing a lot of damage to the enemies.

But the character’s specific role in overall gameplay doesn’t stop at combat. CJ can perform a dash that can avoid enemies or speed up level traversal. She can also clamber over ledges with her pickaxes. Making her the main choice of moving through levels. Garoo, on the other hand, is slow and sluggish. But he can block enemy attacks and use his sword swing to deflect certain projectiles back to enemies and bosses. 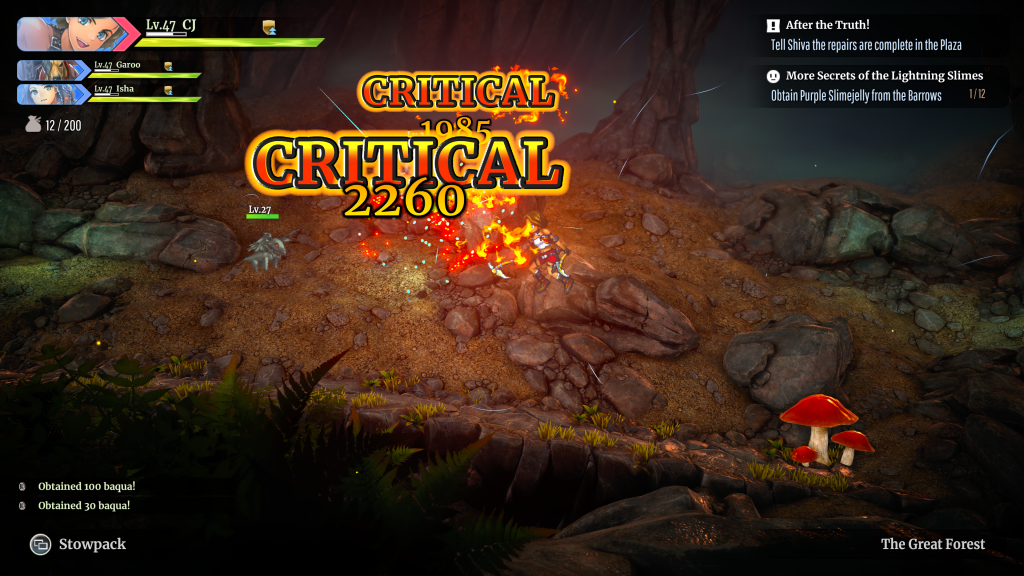 Isha, however, only gets a short levitation ability that can be mixed with CJ’s dash to traverse over certain platforming sections. The platforming, however, was mostly basic but had certain jumps that required me to time my double jumps right, to then follow up with Isha’s levitation to reach. Everything felt responsive and tight from combat to platforming. All of this is mixed together well to make a very enjoyable gameplay experience.

A Dash of Bosses and Puzzles

There are six unique bosses in Eiyuden Chronicle: Rising spread across its lengthy levels. They will all be stationary most of the time so you can use Garoo to break their shield, then let CJ go in for a lot of swift strikes. Each boss will always have a build-up to their attacks so you can react in time. Nothing feels cheap as a result. Even if it comes at a detriment to the difficulty of the game. Eiyuden Chronicle: Rising has three difficulty options, Simple, Normal and after you finish the game, Hard mode. 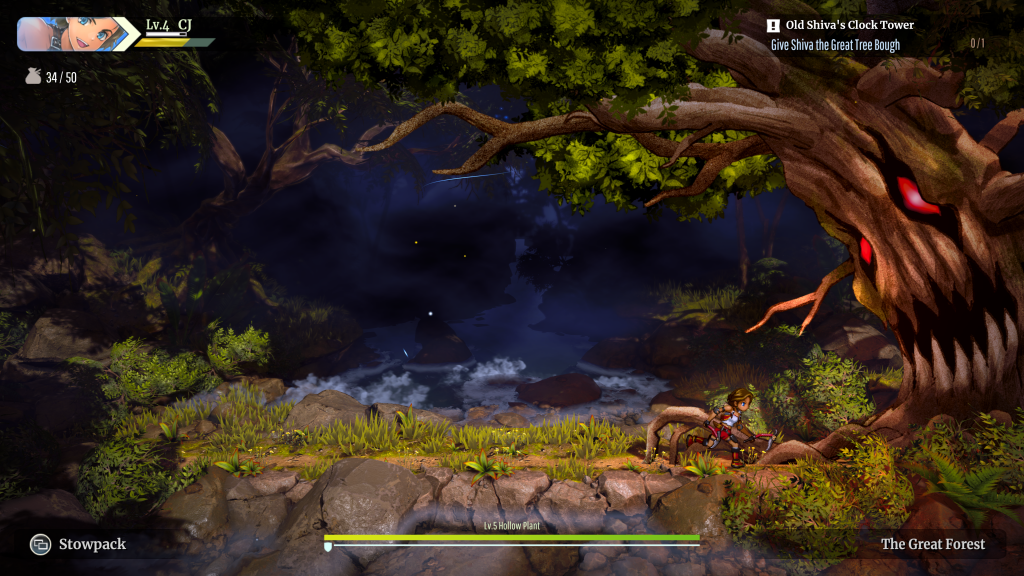 I never swapped to simple and playing on normal was a breeze, including all the bosses. After completing the game I swapped to hard mode and went back to each boss to find that they just have more health and they’re at a way higher level. I never died once during boss or enemy encounters as a result. 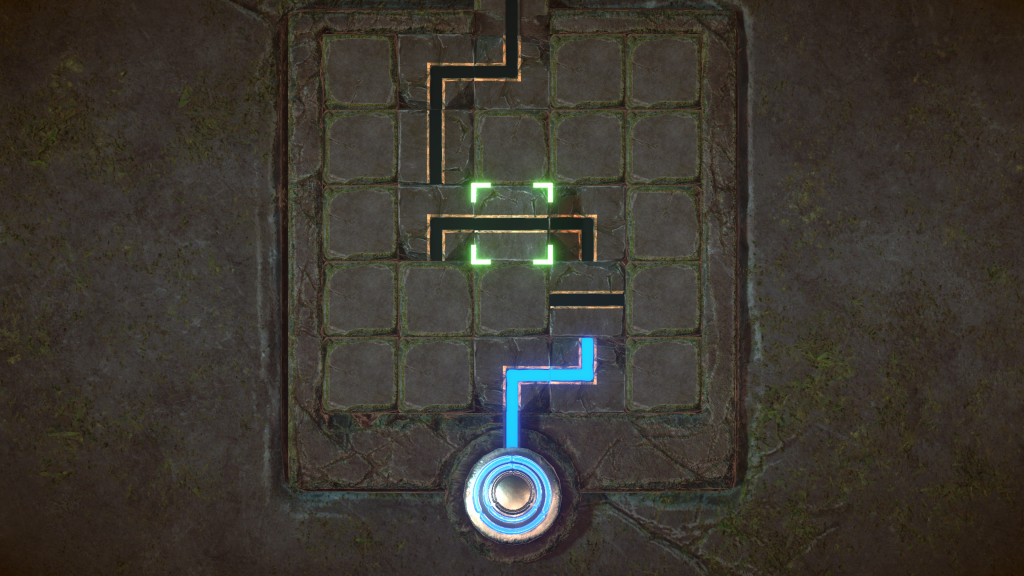 Example of the Puzzle, These Get Way Harder.

This also applies to the game’s occasional puzzle that only appears during certain points of the story. You have to align each block on the stone slab to let the energy flow from one end to another. Each stone slab will require more thought. But all of this was very easy for me.

However, the gameplay never got boring due to how cool and satisfying the combat is. There was a weird addiction I developed to just go back to each level and farm resources. Juggling enemies in the air, and finding massive amounts of currency and rare materials that I could farm always kept me interested. Especially with its fishing mini-game that is a nice break from the standard adventure. Despite the lack of challenge, it was still very fun and engaging to play for long sessions.

As you do more of the main story in Eiyuden Chronicle: Rising, more side quests will pop up. There are two variants of side quests you can do. One is normal quests for standard citizens and one you can do for vendors and other shopkeepers. When you do side quests for vendors, their houses will slowly improve over time until the entire town looks rebuilt while also allowing for armor and weapon upgrades for each character to be unlocked. It gives a sense of progression, while you collect stamps and other quest rewards. 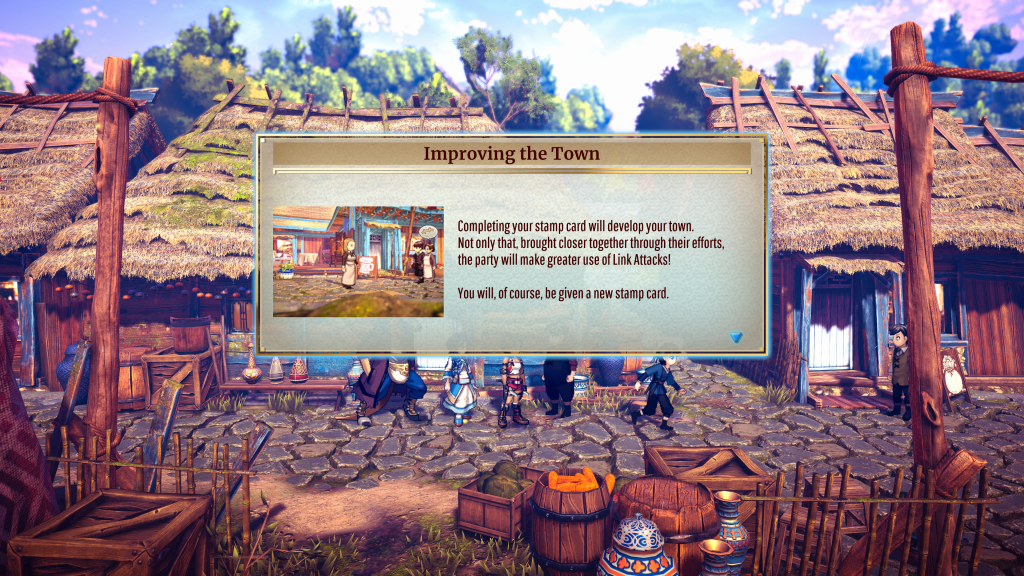 These upgrades aren’t just stat increases, they can either give CJ a double jump, giving Garoo immunity to being knocked down, or increase the duration of Isha’s levitation. All of these upgrades feel meaningful, and you have to earn the right to unlock these upgrades through side quests while you collect stamps for CJ’s stamp card.

The stamp system is a form of overall progression in the game. There are four tiers to it, with one hundred and sixty stamps to collect in all. With each stamp requires the completion of a side quest. This means that there are over one hundred side quests to do in Rising. But I promise it’s not as scary as it sounds. 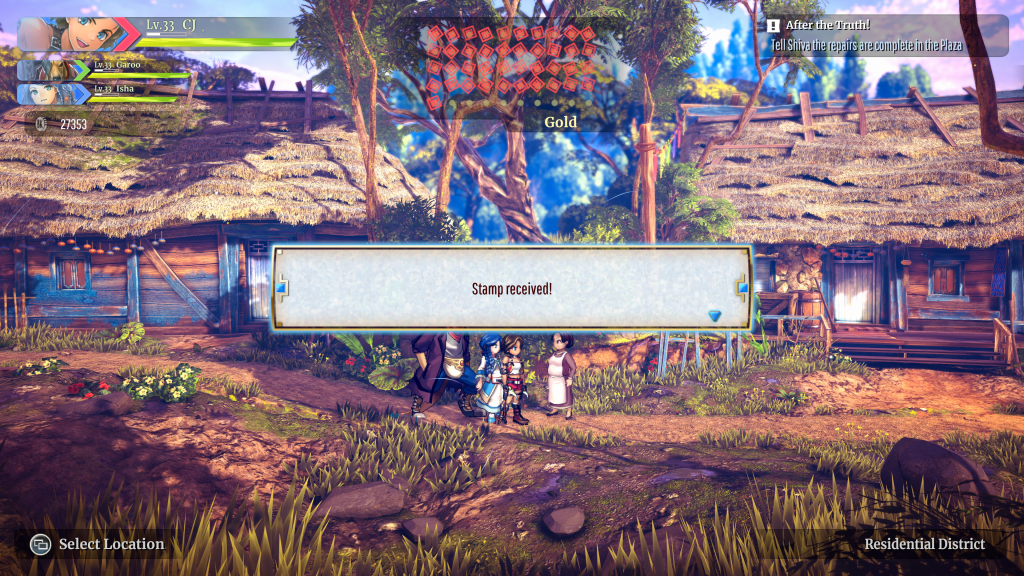 All of the side quests will be quick to complete. You either talk to various NPCs, fetch items from certain locations or kill certain enemies. So these will always be easy and not grate on your patience. As collecting stamps can earn you specific rewards from a special vendor. One reward that you get at the very end is an accessory that allows you to do unlimited link attacks. Making the game go from almost no challenge to no challenge at all.

The game overall will run you 12 hours for the main story if you focus solely on that. While getting every stamp will get you to about 22 hours overall.

But at the end of that, you can apply all of your rewards and upgrades to just have fun going back and killing bosses or enemies. This system is very rewarding, I never felt like I wasted my time and it made the overall experience of the game even better. Because going back to levels to feed my little addiction from its gameplay got even sweeter after all of the side content was exhausted. Leaving me eager to start a new file to do it all again.

The graphics in Eiyuden Chronicle: Rising are absolutely beautiful. Every single area of the game is colorful and does so much with the 3D environment. As you walk across each level you can see stellar environments around the character with incredibly detailed backdrops as well. The screenshots used in this review do not do the scenery justice. The water flowing under a bridge and separating under the support beams, or when the trees go across the screen hiding the character for a brief moment. The vistas are spectacular. 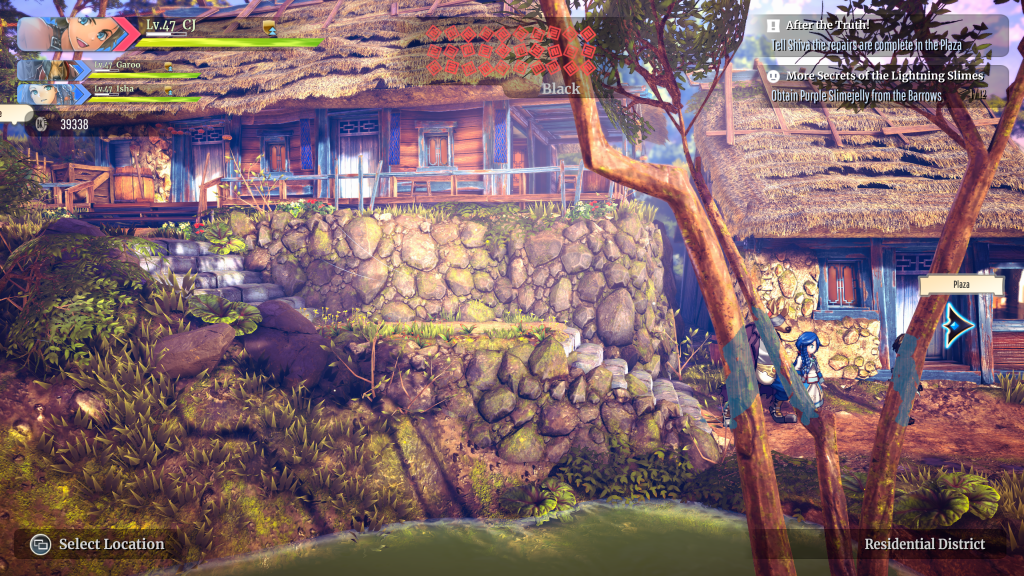 The same can be said for the performance of the game. I was playing on the Xbox Series X and I encountered no problems. No glitches, bugs, graphical problems, freezing, stutters, crashes, and whatever else you could think of. It is as squeaky clean as a game can get. The music, however, is pretty basic yet catchy. None of the tracks feel out of place but don’t feel particularly unique. But all of this meshes together to create a near-flawless experience.

Eiyuden Chronicle: Rising is an extremely fun and deep experience. The story is simple, but it has a mystery that I was eager to see fully. With characters that are so well written and fun to watch on screen. The combat is engaging and satisfying, with so much side content to relax with while feeling like you’re actually getting upgrades. The icing on the cake is the flawless performance of the game and catchy tracks with gorgeous visuals. This game is an easy recommendation, especially at its shockingly low price tag of just $14.99, and I look forward to playing Hundred Heroes next year.

Note – The publisher provided a review key for the purpose of this review. The Xbox Series X version of the game was reviewed.

9
A Simple and Fun Beat 'Em Up