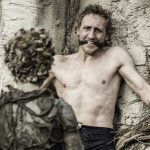 You are reading
Set Photos From Bloodmoon, the Game of Thrones Successor Show

While the rest of the world continues to debate the quality of Game of Thrones Season 8 Bloodmoon is moving full steam ahead. A twitter page sporting the upcoming shows titling recently posted some on-set photos. Most photos seem to be from the Belfast location. Bloodmoon is rumored that the show has already begun filming, you can see what we know coverage here.

Bloodmoon is set as a prequel to the Game of Thrones. Thousands of years prior, we will get to see the land before what we know with houses. Thus, many of the houses are long gone and some that are just coming into power. The show involves the story of the Children of the Forest as well as the first incursion with the Night King. Bloodmoon likely that we will see many familiar set locations going forward. Belfast was a popular location in Northern Ireland as the setting for Winterfell and the North. Are you excited for Bloodmoon?