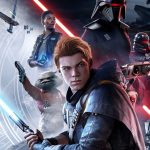 At the EA Games Play Event on June 8th, they showcased the first footage of Star Wars Jedi: Fallen Order from Respawn entertainment. The in-game footage showed a living world that featured protagonist Cal Kestis, interacting with surprise guest  star, Rogue One’s Saw Gerrera. Cal is tasked with infiltrating a refinery on Kashyyyk, the Wookie home planet and sabotaging the plant.  The action is a little slower and more methodical than many were expecting considering the pedigree of Respawn. Cal circle strafes around opponents and launches combos with Force powers and his lightsaber much more similar to a Bloodborne than a Devil May Cry. It is an impressive debut showing for the game, as it seems that EA is in desperate need of a hit after the lukewarm response to Anthem earlier this year.Our own members had the chance to for hands on impression of Star Wars Jedi: Fallen Order. Enjoy!

What are your impressions of Star Wars Jedi: Fallen Order? Everything you were hoping for? Let us know in the comments below.