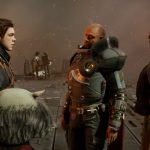 Fans of Star Wars have multiple reasons to be excited about their favorite space-opera. First, Rise of Skywalker, the finale to the saga, was revealed in April. Then, Star Wars Galaxy’s Edge opened up the new expansion at Disneyland last week. Lastly, Respawn Entertainment revealed gameplay footage of their upcoming Star Wars: Jedi Fallen Order game. Speaking with Greg Miller at EA Play, Respawn head Vince Zampanella and Stig Asmussen revealed gameplay. In recent years, Star Wars had released via mobile games, through DICE’s Battlefront series and of course the ever expanding The Old Republic by BioWare.

Are you excited for Star Wars: Jedi Fallen Order? Let us know in the comment section below.