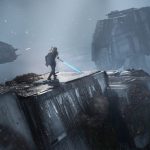 For starters, Game Director, Stig Asmussen, wrote into a blog post depicting Respawn Entertainment’s strategies on delivering content. During E3, the first gameplay had been revealed allowing fans to get a first glimpse at the game. Asmussen shared that the level design drew inspiration from games like Metroid, Castlevania and even Dark Souls. In Fallen Order, you will be able to travel between multiple planets while still maintaining a sense of open-world gaming. While furthering your skills, you may often find yourself going back to previous locations to unlock completely new paths and destinations.

The new trailer starts off with Cal Kestis, played by Cameron Monaghan, the protagonist Jedi Padawan, hijacking an AT-AT Walker. Parts of the game show the traversal being used as Kestis clings to grassy sections stuck to the Walker. Once inside, we see a few incursions with several Storm Troopers discussing who was going to report the current casualty situation. A lightsaber boomerang move and a force push are used as he makes his way to the Walker cock-pit. Once the pilots are incapacitated, Kestis begins his assault on the Imperial troops. Minor destruction occurs on some building and bridge scaffolding and even a brief encounter with Saw Gerrera, played by Forrest Whitaker. This scene only covers roughly seven minutes of the gameplay for Star Wars Jedi: Fallen Order.

The footage definitely proves why the upcoming title is on our Top 10 Games of E3. Are you excited for Star Wars Jedi: Fallen Order? Let us know in the comment section below