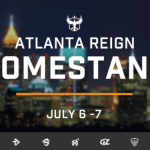 You are reading
Atlanta Homestand Winners and Losers

The Atlanta Homestand officially set Stage 3. Atlanta was host to the most fun, fan-friendly event of the season. They gave us do-or-die matches, celebrity face-offs, and final touches to Stage 3’s Playoffs. Here we go, who won and who lost the Atlanta Homestand?

What a way to end Stage 3. Philadelphia’s win and Shanghai’s loss set up a win-or-go-home scenario for their Sunday matchup, while New York still needed to win to clinch a spot. Both Shanghai and Philadelphia duked it out throughout Volskaya, but Shanghai came away with the 3-1 win and final spot. New York trampled the competition to punch their ticket (see below for further breakdown). Playoff spots weren’t the only thing on the line. This week, so was pride. What was originally a Bren versus DaFran Widowmaker duel turned into a Bren versus Babybay Widowmaker duel, and a DaFran vs Mangachu Torbjorn, hammer only duel. Bren started strong with two early points before Babybay reminded Bren who plays professionally. The final score was 9-4 Babybay. DaFran and Mangachu did not disappoint for anyone other than the Atlanta home fans because Mangachu won 7-5.

Regardless, the Homestands have shown promise for next season when teams will play home and away. Fans are filling these seats with pure excitement, and it bodes well for the League’s future.

Atlantic Division crown? Check. Best map differential? Check. Undefeated Stage 3 record? Check! Guess that’s everything the XL needed…but wait, there’s more! Shanghai dropped to the last spot of the Stage Playoff bracket, so instead of facing a hot Houston team, the XL will get to pick on the team that stumbled down some spots. Further, the XL virtually clinched the regular season Atlantic Division Title. All they need to make it official is one win in Stage Four. The XL and the Vancouver Titans had clinched postseason berths already, but the XL has much less to do to make their division crown official when Stage 4 starts in two weeks.

Talk about winning without doing anything. The Shock will probably prefer playing a team they shut out this stage instead of one that (before this weekend) only lost to the fiery LA Valiant. This is the Stage to end the Shock versus Titans Stage Finals because the Shock dropped not one, but two matches to lesser teams. Sure, one was to the “Hot”-son Outlaws (I’ll see myself out), but the other was to the Chengdu Hunters. This is why we can’t count on the same force of nature to show up this weekend despite shutting out Boston, Florida, London, and Seoul this stage because only Seoul made the Stage Playoffs. In short, the Shock are lucky they’re facing a team they already trounced this stage.

Getting into the Stage Playoffs does not mean the Dragons won this weekend at all. Shanghai was the fourth-seed in the Stage 3 Playoffs before the Homestand and now they are the lowest seed, preparing to face the NYXL instead…San Francisco. Ok so Shanghai was going to have a rough first round in the Stage Playoffs regardless, but this was the stage to face the Shock instead of the NYXL. I want to write that Shanghai will have to settle, but teams can’t really settle when they go up against the NYXL!

Well, if all reports are true, this was the final regular season weekend for the GOATS meta. As reported last week, the League is expected to introduce a role lock next Stage, killing all variety in compositions, but most notably the GOATS meta. Some players feel that GOATS could have been better addressed with future characters to counter GOATS meta or Tank characters. Others felt that future updates like late February/early March’s would have given us that counter. The League, reportedly, said no to both, and is instead giving us a feature that should only be an option for the base Overwatch game. Farewell, GOATS, and maybe the League can fix this someday. Fingers crossed.