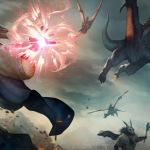 You are reading
Citadel: Forged With Fire Gets Console Release Date for PS4 & Xbox One

Fans of open-world survival games will have another game being added to their options on console. Developed by Blue Isles Studios, Citadel: Forged With Fire will be launching on PlayStation 4 and Xbox One consoles October 11th, 2019. The game is described as “A massive online sandbox RPG featuring elements of magic, building, exploring and crafting.” Essentially, it’s like Ark and Conan, only this time you get to work in magic into your worlds. The game is currently released on steam where it was available on Early Access but will be a full retail launch in October for consoles.

This is continuing the trend of popular open-world survival games releasing on a console. Last year, The Forrest was made available to PlayStation 4 and will release later this year on Xbox One. Other games such as Atlas and Rust have all been but confirmed for a console release, when the timing is right. Are you excited for another world emersion experience to launch on your favorite platform? Let us know below.