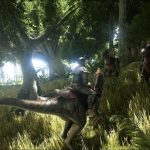 You are reading
Valguero Map For Ark: Survival Evolved Launches On Console Next Week

The latest map for Ark: Survival Evolved, Valguero, has been officially given a date for the console release. Currently, the map has been available to the PC while finishing certification for the Xbox and PlayStation consoles. Unfortunately, this means once again, no update for the Nintendo Switch port.

XBOX and PS4 survivors, get ready to meet Deinonychus! Valguero will be going live on July 19th 17:00 UTC! pic.twitter.com/M2QWN6WA9C

This is good news for those awaiting the new map, which was a winner of a recent Modders contest. Additionally, Community Manager, Ced also stated he does not believe Valguero will launch with Primitive Plus servers for official. However, those wanting to play Primitive Plus will be able to do so on their single player and Nitrado rented servers.

Along with the map, the latest dinosaur, the Deinonychus, will also release with the map. The new dinosaur is a tamable mount with verticality climbing and group benefits during combat. Unfortunately, creatures such as the Griffin and Phoenix will not be present on Valguero naturally.

Are you ready for the launch of Valguero on July 19th?