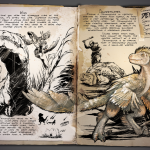 Ark: Survival Evolved is still reigning as the king of open-world survival games. While the genre is pretty niche others have tried to break into the mold with moderate success. The resurgence in titles such as Conan Exiles and newer releases such as Fallout 76, proves the genre is still alive and well. None the less, Ark is still pushing forward with new content.

Today, Studio Wildcard announced a new map to be released on all platforms. Valguero, as it is named so far, presents a very Ragnarok-like vibe. Valguero was the winning map from the recent modding contest help by the developer and now will be the latest official map. The map looks to provide 63km of land in various biomes. Overall, it is a valley, with a massive lake in the middle filled with rock formations, flatlands, ravines and more.

Included in the trailer many species of the Ark can be found in Valguero. Wyverns are flying high above, griffins are swooping around and the new Deinonychus is terrorizing survivors. The teaser trailer does indicate that the map will be included for PC, PS4 and Xbox. Unfortunately, there is no indication that the map will be coming to the Nintendo Switch.

While more is not known about the map, Studio Wildcard plans on a stream at 3PM PST on Twitch.

If you would like to see a more in-depth look at Valguero, we would suggest checking out TBF Gaming for more.