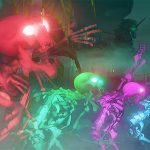 You are reading
Fort of the Damned Guide for Glory

Sometimes, games as a service release low difficulty events to cater to the masses. Other times, they’ll release harder or more time-consuming events. Sea of Thieves’ latest update, Fort of the Damned, caters more to the latter. As an extension from last year’s Festival of the Damned, this update primarily revolves around the different lantern colors but also includes cosmetic, competitive, and other updates.

Writer’s note: There’s a Tall Tales spoiler near the end of the article.

Preparing for the Fort of the Damned

Skeletons of every color have engulfed Old Boot Fort, and the Fort of the Damned sits in its place. Before you can go take back Old Boot Fort, there’s a laundry list of things you need to do.

First, you need to find a ritual skull. Duke has quests of varying difficulties and time commitments to find a guaranteed skull if you know what you’re doing. The easiest option gives you an “‘X’ Marks the Spot” treasure map to find a ritual skull on the nearest outpost (including the one you may be on). Next, are the standard “Skull Seeker” quests. Each region has its own version of this quest, but all initially send you to beat a skeleton captain somewhere in the region. Once you beat it, they drop a high-quality skull and give you a “Captain’s Orders” map where the actual Ritual Skull is. This is confusing because this still starts the “Voyage Complete” animations, but you won’t get the Ritual Skull from the first mission. Finally, there is a Legendary “Skull Seeker” quest for Pirate Legends with a bigger payout than the others.

Once you have the ritual skull, you need to find ways to die. Seriously. Since last year’s Festival of the Damned, when you go to the Ferry of the Damned (by dying), you can pull a different colored flame from the middle of the deck. There are six different flames, and you need all of them and the Ritual Skull to activate the fort. See the below list of colors and how to get them.

Taken from the Sea of Thieves Gamespedia

If you’re concerned about your luck with lightning, you can now wield your sword for a better chance of getting struck. Once you get a color, you can set it as any lantern’s color on your ship. Once you have all six, you’re ready to take on the Fort of the Damned (and you unlock “The Festival Party Boat” commendation).

Raiding the Fort of the Damned

The Fort of the Damned is shrouded in a thick layer of fog and lit with the Disney villain shade of lime green. At the top of the island is the actual fort, where six statues stand and a caged skeleton sits. Each statue has a lantern that you need to light with its corresponding color for each of the above lights. Once all lanterns are lit, the cage swings open, and you can place the Ritual Skull to start the assault.

Throughout the raid, each statue lights up when skeletons of matching colors spawn. At first, the skeletons won’t take damage because they’re ghost-like. To beat each color, take the light from the lit statue, and raise it over that skeleton. Then start hacking or shooting at them.

During the fight, multiple colors will spawn simultaneously, and some skeletons have powder kegs or Stronghold Kegs (aka Mega-Kegs). Each colored skeleton has multiple commendations earned for beating more and more of them, so expect to make a lot of doubloons as well as gold.

Finally, the Fort brings out an old foe from the Tall Tales; the Ghost of Graymarrow. Graymarrow can shoot you with his blunderbuss, summon skeletons, or slam two stronghold chests together to knock you back and deal lots of damage. Further, he has a huge health pool, so it’s going to take a coordinated crew effort to take him down. Don’t face him alone because you’ll be swarmed by the colored skeletons. If need be, lure him close to your ship, and blast him with cannon shots. When Graymarrow goes down, all skeletons go down with him, and the rewards are yours!

This is the Best Loot Drop Ever

Graymarrow drops a stronghold key. Use it to unlock the treasure room, which has at least four Mega-Kegs, Stronghold Chests, Reaper’s Chest, and Stronghold Skulls and more. Loot and commendations considered you can easily earn over 75,000 gold and around 200 doubloons. No matter what, you’ll make 100 doubloons off the Reaper’s Chest because Rare amped up the rewards from them. There’s a swath of new cosmetics to buy with them, including variants of the newest feature, the banjo instrument!

Stay tuned next week, as we dig deeper into everything else the Fort of the Damned has to offer.