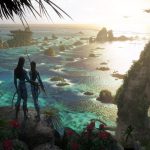 You are reading
Pitching An Avatar Open-World RPG

With the release of new concept art for James Cameron’s Avatar sequels, it made me realize one thing – the franchise desperately needs an open-world role-playing game. Back in 2009, Ubisoft made and released an Avatar game to coincide with the film’s debut. While it didn’t see favorable reviews and reception, the potential was there for a truly great game. In 2017 at GDC, Ubisoft announced a partnership with Lightbox Entertainment and Fox Interactive to develop a new Avatar game. However, not much else has been said since its announcement. With the impending release of next generation consoles, one can hope that an open-world Avatar adventure with deep RPG elements can see the light of day. The more I thought about the project, the more ideas came to mind of what would be the perfect Avatar game. 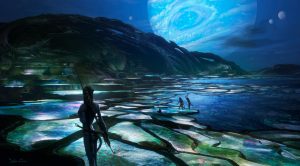 In its first film, Avatar established that Pandora is full of rich and diverse cultures. For game developers, this foundation can be just as fresh and open to ideas as much as starting a new IP.  To really engross players in the world and its characters, our new game’s narrative backbone will be exploration with a coming-of-age theme.

As an idea: A native of Pandora is on a near-worldwide journey to earn the title of clan leader. Off the bat, the main character needs to be likable, relatable, and have goals. Players need to be invested in the main character to care, so it’s important to get this right. As we have seen in Avatar, the Na’vi have strong familial bonds. This story thread should be carried over to the game.

Let’s not forget about the Na’vi’s odd way to establish a connection with the world: the Tsaheylu. In the movie, Tsaheylu is the Na’vi’s and another organism’s connection through their anatomical queues. In the Avatar comic book Tsu’tey’s Path, Tsu’tey connects to a spiritual landmark to speak with a Na’vi spirit and ask for guidance. This can be a really effective storytelling method as players explore Pandora. This can also be a clever method for the game’s tutorial.

To avoid unnecessary story roadblocks, this game should take place long before the events of the films. With a clean slate, the developers can tell any kind of story they want without feeling pressured to follow the movies. This means new characters and new takes on the Na’vi culture, which are both highlights of the franchise.

See More: Lords of the Rings: Gollum Coming to PS5, Xbox Series X and PC in 2021

At its core, our new Avatar game is a single-player third-person open-world RPG with action-adventure elements. Naturally, a strong main narrative supported by immersive exploration and side quests/content is at the forefront. Players will be able to explore beautiful dense forests, mountains filled with ancient treasures, ride banshees and other animals for quick traversal, and more. The Na’vi have a powerful spiritual connection to the world. In turn, the player’s interaction with the world will be more personal and can serve a gameplay purpose like solving puzzles or recalling past stories told from the Na’vi ancestors. There’s a ton of untapped story potential here.

Additionally, the Na’vi are the epitome of a hunter-gatherer group. They’re athletic, versatile and deadly with a weapon. As our Na’vi adventurer learns the wilds of Pandora, his skill in combat will go from novice to unmatched. They have prime survival instinct and that should be reflected in combat as well as exploration. Players will be able to learn more about Pandora by gathering collectible items and visiting landmarks along with Tsaheylu and meaningful side quests. We’re talking less fetch quests and more similar to Witcher 3. From collecting unique plants to visiting the floating mountains to assisting a fellow Pandora native, all of it will add to the grand adventure experience. 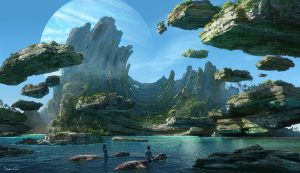 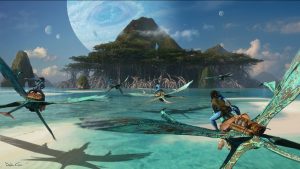 As for size, Pandora is a huge planet. So rather than create the entire world, the game can take a more accessible approach to its size. Similar to Horizon Zero Dawn or even Xenoblade Chronicles, Pandora can be big, beautiful, and worth exploring every corner. For extra fun, let’s throw in a photo mode to capture the gorgeous vistas of the world.

While creating your own Na’vi sounds appealing, I’m more interested in a story with a dedicated main character. However, creating your own Na’vi, with some creative constraints, can also work and add to the experience. The closest comparison that I can make would be the Mass Effect series, in which the protagonist has personal player-based traits.

Our Avatar game would include a skill tree that can unlock enhancers to combat, foraging, travel, and other RPG elements. The best idea would be to work with producers, and even James Cameron himself, for nuanced ideas that make sense for gameplay progression.

See More: Top 8: Marvel Games We Would Like To See Made 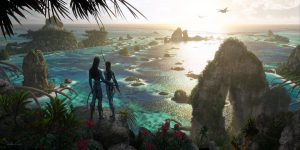 Who Should Make It?

Any developer dedicated to the lore of Avatar and the talent to craft a complete adventure experience would be a prime contender. The third-person gameplay needs to feel intuitive for combat and traversal. The main campaign should be a meaningful coming-of-age adventure with side quests and exploration that goes hand-in-hand with the story. RPG progression has to feel progressive and should reflect player choice.

A number of studios come to mind – Guerrilla Games, CD Projekt Red, Ubisoft, and Crystal Dynamics to name a few. Each of the developers listed have strong resumes on the open-world genre, fun gameplay, and well-crafted stories.

Now that we established an ideal Avatar game, we can only hope that it gets made. The franchise itself still has so much story tell, as evident by James Cameron’s four planned sequels. If done right, the impact on pop culture can be just as big as Star Wars or the MCU.