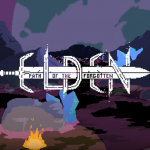 You are reading
PAX East 2020 – Elden: Path Of The Forgotten Interview

The crew had a special opportunity to have a quick chat with lead and sole developer of Elden: Path Of The Forgotten, Dylan Walker.  Elden is a “Medevil Eldritch Fantasy Game” with that really nice retro pixel style look. For those that are not too familiar with “Eldritch Fantasy”, it is akin to H.P. Lovecraft and the horrors of Cthulu. Elden: Path Of The Forgotten is based on environmental storytelling and reactive combat. Dylan describes it as “It’s kinda meant to be like a book in a language you don’t understand, but every other page has a picture”. No dialogue, words, just visual imagery to portray the story. You can expect to see the game on Ps4, Xbox, Switch and PC sometime this year. Check out the full interview and the trailer for the game below. The Steam store page is live: Elden: Path Of The Forgotten