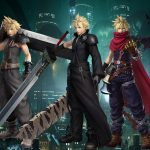 The new designs to every character we’ve seen in Final Fantasy VII Remake are just perfect. Balancing original looks with a modern flair are no easy task, but the dev team managed to pull it off. While materia, gil and new equipment can be the standard rewards for completing side quests, is that all there will be? Hopefully, some of these prizes include content worth replaying the game for: character skins. Over the years, Cloud, Tifa, and other FFVII characters have received numerous alternate outfits with a select few being new favorites. Below, you’ll see our top picks for the optional outfits while playing the first part of Final Fantasy VII Remake.

The Original FF7 PlayStation Models For All Characters

This is more for goofy nostalgia than anything, but why not? 2019’s excellent Resident Evil 2 brought in the classic-style costumes for Claire and Leon and they looked fantastic. Bringing in the PS1 polygon models into a fully-HD world is a fun shout out to longtime fans. It would also be just downright hilarious. Block arms and fully-voiced characters whose mouths don’t move sounds like a great time. 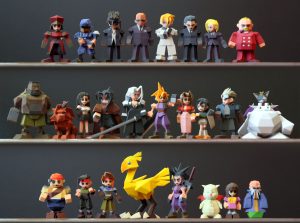 Giving Barret the Mr. T signature haircut and beard in FF7 Remake would have the funny comparison that started in 1997 come full circle. Unfortunately, Square Enix will more than likely avoid this for obvious legal reasons. They even changed Barret’s look in the FFVII: Advent Children movie to avoid any more Mr. T comparisons. If FF7 Remake comes to PC however, there’s no doubt in my mind someone in the modding community will make a ‘Mr.B’ alt. 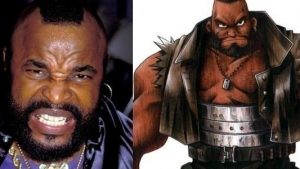 See More: 5 Moments That Have To Be in FFVII Remake

For a mid-2000’s redesign, Cloud and Tifa’s new outfits for Final Fantasy VII: Advent Children aren’t half bad. Cloud is given a little more sexy with a partially-open chest and a sleeker look that goes with his personality and style. Tifa’s black leather suit goes for a little less sexy compared to the original, but one that fits her fashion sense. She swaps her original black gloves for red ones as well. Both of these looks were also featured in Kingdom Hearts II. 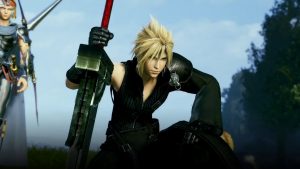 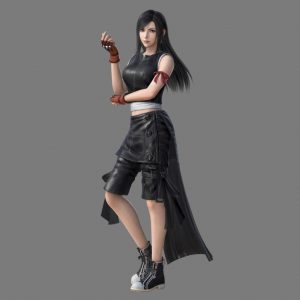 Tifa’s cowgirl getup is featured in the PSP game Crisis Core: Final Fantasy VII, a prequel to the 1997 game. The games explained it was her tour guide outfit for when outsiders visited her hometown, Nibelheim. As for why it’s a cowgirl outfit, I’ll leave that up to your imagination. Regardless, it’s a fun look for the brawler and can be cool to see in some combat scenarios.

Aerith’s outfit in Kingdom Hearts 1 is basically her original FF7 getup but without the jacket. Nonetheless, it’s always great giving players options to accessorize their characters even if it’s something as simple as having their jacket on or off. Kingdom Hearts II Aerith, on the other hand, has a new dress entirely. While it does look a bit ‘hand-me-down’-ish, it fits her initially timid and always quirky personality that would be a nice nod to KH fans. 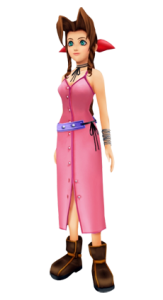 Arguably Cloud’s best alternative design, his KH1 look is edgy but cool. Cloud dons a red scarf, a metal claw on his left hand, and a black demonic wing on the left side of his back, referencing Final Fantasy VII‘s Vincent Valentine and Sephiroth. Oh yeah, and belts. Lots and lots of belt straps. To add a little more edge, character designer Tetsuya Nomura wrapped the iconic Buster Sword in bandages. This outfit looks great in the arena brawler Dissidia Final Fantasy NT, but it’ll undoubtedly look its best in FFVII Remake. If not the entire outfit, then the bandaged Buster Sword would be a fun easter egg. 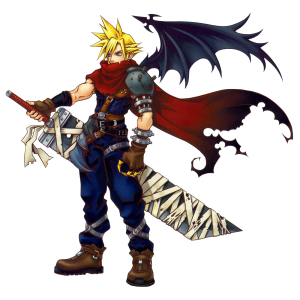 Putting Red XIII in a costume will be… odd, to say the least. So what’s the next best option? Colors! Red XIII has been sporting the orange and red since 1997, so the anthropomorphic beast could use a new coat. For some ideas: a bright yellow body with the tail-end flame being orange or even a dark red; a blue body with light blue/dark purple for the tail flame; and a black coat with a yellow or green flaming tail, just to name a few.

These are just a few of the ideas we had in mind for Final Fantasy VII Remake. We wanted to include Kingdom Hearts 2‘s Sephiroth, but it’s unclear how much he’ll be in the first part of FFVII Remake, so it might not be worth putting in yet. But, what other alternate skins would you like to see? Perhaps an original, all-new look? Let us know!