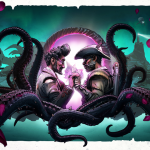 You are reading
Guns, Love, and Tentacles Review: Safely Slimy

Weddings are family celebrations. You catch up with people you haven’t seen in years, your family grows, and it’s a big party. Some weddings take place in special destinations, making it even more of a vacation. What most weddings don’t do is take place in front of a Lovecraftian horror background, but Gearbox Software wants the next Borderlands DLC to have it so we’ll roll with it. Borderlands 3’s second addition, Guns, Love, and Tentacles, combines all of these in the tried and true Borderlands style. Eerie new characters and designs fit the surface-level goal, but a lack of deeper analysis lowers this add-on immensely. No matter what, Jakobs and Hammerlock are such a great couple.

Guns, Love, and Tentacles is A Wedding Planner’s Worst Nightmare

Borderlands’ new DLC is about Wainright Jakobs’ and Sir Alistair Hammerlock’s wedding. Gaige, former Borderlands 2 DLC Vault Hunter and current wedding planner, picks a lodge on the planet Xylourgos, right under a dead Vault Guardian. Jakobs, who’s nervous about the wedding, inadvertently discovers an occult ritual the townspeople call “The Renewal.” This fiendish ritual sacrifices someone for Vincent Olmstead, leader of the “Bonded” cult alongside his wife, Eleanor, to possess and survive. Despite your’s and Jakobs’ best efforts, Vincent’s mysterious ring picks Jakobs. Your goal, as the Vault Hunters, is to save Jakobs from involuntary sacrifice, defeat the Olmsteads, and save the wedding.

New and Old Characters Shine in a Cold, Dark World

Fans who like Borderlands most for its characters will enjoy this DLC. Long-running characters, like Claptrap and Hammerlock, return and get their deserved screentime. Clearly, Guns, Love, and Tentacles should focus on Hammerlock, but he can’t carry a wedding on his own (duh!). So why not bring back an old Vault Hunter, Gaige? Gaige is the spunky wedding planner and the main contact for the story. She keeps you updated on the soon-to-be-wed, provides tactical support, and eventually fights alongside you.

As good as familiar faces are, the DLC’s best characters are the new ones. Mancubus, the Lodge’s ominous caretaker, fits the creepy Lovecraftian theme with his Severus Snape-esque drawl. Eleanor, the main antagonist, is a serviceable villain who fits into the story. Burton Briggs, a local amnesiac, has an excellent side quest with the best moment in the DLC. Each character succeeds here because they were written specifically for this Lovecraftian world. Xylourgos is an eerie planet that has the residents to match.

Another key element of any world? Art style. New beasts and spooky level designs make for aesthetically appropriate venues for mass mayhem. Nearby the Lodge is a rickety town filled with cursed citizens, dimly lit corridors, a haunted cemetery, etc.. However, Xylourgos is not all Lovecraftian. The icy planet does show how the wider Borderlands lore changed it. Xylourgos isn’t just a random pocket away from the Borderlands universe; it’s a planet that’s balanced another genre with Borderlands lore.

As such, Xylourgos and its inhabitants shine brightest when compared to the rest of the release.

It Was the Best of Gameplay, It Was the Worst of Bosses

Guns, Love, and Tentacles featured the finely tuned looter-shooter gameplay its fans love. Do you still want copious amounts of loot and money? Gearbox didn’t change anything here, it’s as good as ever. The Lodge has a loot finder, the machine that disperses any loot you didn’t pick up. It’s a small, but nice, addition to solidify the Lodge’s hub characteristics. There’s also a mission that requires a special gun to see targets you need to hit. Despite some small flourishes, there’s nothing new nor bad about Borderlands’ gameplay. As per usual, it’s the best part about this Borderlands add-on.

That said, the bosses are all over the place. Some look cool with average combat techniques while others are absolute grinds. One, in particular, adds a shield and then armor for two stages, which then devolves into a spongy slug-fest. Since each bar is a different element, you need different elements to fight back. The different reinforcements aren’t separated by stage; if the boss still has health before he gets his shields, the health remains, and so on for the armor. Forcing all three health types together simultaneously draws out the fight and turns the boss from a fair wall to a punishing sponge. These fights echo back to the core game: wildly inconsistent and sometimes frustrating.

Guns, Love, and Tentacles is Safe at Best, Problematic at Worst

Most Borderlands fans should enjoy this DLC, but it doesn’t challenge anything. The same creativity previous add-ons had just isn’t here. Where Moxxi’s Heist gave us BlackJack Boxes and VIP rooms, Guns, Love, and Tentacles give us shut-in villagers with a few lines of dialogue about their curse. There are story relevant collectibles in the missing wedding gifts, but that’s not necessarily a creative spin.

Further, this was the DLC to develop Hammerlock and Jakobs and it failed. Our story’s main question asks “Does Hammerlock make a good husband for Jakobs?” Once Eleanor recognizes you’re a threat, she questions Jakobs’ love for Hammerlock. She calls their love inferior and argues Jakobs would be better served as her husband’s new host. All of the development we get from either groom is one hunting mission with Sir Hammerlock. That’s not to say the hunt was a bad mission, but this DLC was the perfect chance to develop Hammerlock and challenge Lovecraft’s ugly worldviews. Tiny Tina’s Assault on Dragon’s Keep showed how to expand and develop characters in a single DLC, so it is possible. Gearbox should have pushed the envelope in the Lovecraft genre, but instead, they nudged it, leaving the ugly bits untouched.

Do you like the core Borderlands gameplay experience or some characters from the past? Then Guns, Love, and Tentacles is for you. The Borderlands DNA is there. Gamers looking for something deeper may be disappointed, however. Gearbox’s writing team is getting better, but it’s not back to the highs of Borderlands 2 yet. That level of writing would have come in handy for this Lovecraftian wedding horror story. They’ll understand if you can’t, but Jakobs and Hammerlock hope to see you at their wedding.

6.6
It's true to the Borderlands formula, but the surface level setting doesn't cut it.