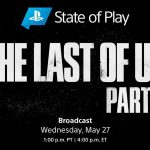 Playstation will be having another State of Play this week. Players will be able to witness an extra eight minutes of gameplay in Last of Us Part II.

The State of Play will be available for players to watch on Twitch and Youtube on May 27th. The show will begin at 1 PM Pacific and 4 PM Eastern. Players will see some of the same gameplay with some new footage. The Last of Us Part II will be coming out on June 19th on the PlayStation 4. Do not expect any new PlayStation 5 news. This State of Play is just strictly for the upcoming sequel. The last State of Play featured the upcoming game, Ghost of Tsushima.

State of Play’s next episode is dedicated to The Last of Us Part II: https://t.co/tb7W3Mq4OS

Tune in Wednesday at 1pm Pacific time for a deep dive and a new gameplay sequence pic.twitter.com/U9MeRec54e

With everything that has happened with this game is it nice to see PlayStation and Naughty Dog showing off more gameplay. Currently you can pre-order two versions of the game from the PlayStation store. The Standard version of the game comes with a couple of bonuses. Players will be able to unlock an ammo capacity upgrade and a crafting training manual. The Digital Deluxe Edition of the game includes those two bonuses and these items: