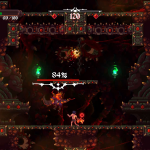 You are reading
Rising Hell Gets Free Prologue Level, Updates

During our time at PAX East, we interviewed Lasheli Dwitri W., the Public Relations head for Toge Productions on Rising Hell, and came away intrigued. The roguelite action platformer launched in Early Access back in October. The game has been updated since with additions and tweaks to the gameplay. According to the developer, they even updated the game’s first playable character, Arok, after some suggestions from players. Now, players can jump into the prologue level on Steam for free.

In Rising Hell, players can choose one of three playable characters as they climb out of the procedurally generated hell and fight hordes of demons. Players will gather power ups and other abilities along the way to aid them in fights. The first character, Arok, is a melee fighter while the second, Zelos, is a long-range fighter. The newly announced third character is Sydna, a short-range fighter that hurls projectile orbs at enemies that have a delayed damage impact.

“The orb attaches to nearby allies, dealing only a small amount of damage. After a while or when enough orbs are attached to enemies, they explode, dealing massive area damage,” says the developer.

Rising Hell is currently only available on Steam, but could it reach other platforms? We asked Toge if there were any plans in the works. Their response: “We are currently still focusing on Steam as it’s still in Early Access, so other platforms would possibly follow after the full release.”

For more on Rising Hell, read up on our recent impressions of the game.