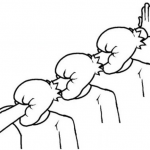 You are reading
Stop Believing Every Stupid 4Chan Rumor As Fact

The lead up to a new generation of consoles has always been one of the most exciting times for fans. Companies go toe to toe with announcements trying to persuade consumers to choose their box over the competition. Mic drop moments, returns of massive IP, and new features that make it truly feel like “next-gen”. Unfortunately, what comes hand in hand with excitement is those that wish to gain something from the excitement. Now understand, I am not saying that creating content around rumors is necessarily bad. Everyone from big-game websites to small content creators relies on rumors for traffic. But how the information is presented is a serious issue.

It’s your responsibility whether you are a video content creator or a writer to clearly present the information properly. Too often we see rumors become “embellished” in order to drive more clicks. This has been more obvious recently with the constant power struggle between console fanboys of the upcoming Xbox Series X and PS5. Grown adults fight day after day on social media over a plastic box that plays entertainment. Arguing over chipsets, bottlenecks, SSD speeds, teraflops, and even more hype words. Many of these people watch a snippet of a 30-minute video of a Digital Foundry video then suddenly believe their tech experts. Digital Foundry does some of the best technical work in the industry. However, desperate for clicks content creators love taking information out of context to fit their motives.

You can take a factual piece of information out of context in order to make it fit a certain narrative. This became more apparent than with the unveiling of Unreal Engine 5 on PS5. The tech demo itself was an amazing look at what we could expect to see games to look like in the next generation. It seems simple enough, doesn’t it? Well, it isn’t apparently. People quickly started running with a narrative that PS5 would be the only platform to run the engine due to its custom SSD. While on the other side of the fence, fans clamored to say that Xbox Series X would be able to run it better because of the overall power of the console. This misinformation got so bad that Tim Sweeney CEO of Epic Games had to come out and clarify. Stating that the engine worked on both consoles and all features would be available for developers on both consoles. Could there be differences in how Xbox versus PlayStation will perform? Maybe. But only time and hands-on footage of both will tell the full story.

The Unreal Engine 5 demo on PlayStation 5 was the culmination of years of discussions between Sony and Epic on future graphics and storage architectures.

The Nanite and Lumen tech powering it will be fully supported on both PS5 and Xbox Series X and will be awesome on both.

Companies Have To Be Careful…

In 2020, having clear and consistent messaging is one of the most important aspects of PR and marketing. We have seen this most recently with the information drip from the PlayStation 5. While admittedly Sony has been taking their time with releasing information about the upcoming console, there are many factors at play because of this. The virus pandemic has been ravaging the world and forcing many publishers to shake up how they are showcasing their products. As well as the difficult situation of trying to balance hype for the next generation console while not leaving The Last of Us Part II and Ghosts of Tsushima behind. It has been a difficult balancing act for Sony. While it has not been perfect, it certainly has not been anywhere close to the worst information roll out for a console we have ever seen.

However, view chasers and wannabe insiders have used this silence to their advantage. Fabricating rumors may seem harmless in the most basic sense if people are gullible enough to believe it. However, it can sometimes create unrealistic expectations from casual fans who may have seen an article by a random gaming site, or a video from their favorite Youtuber. This came to a head when a rumor began floating around about full backward compatibility with all PlayStation consoles coming to PS5. 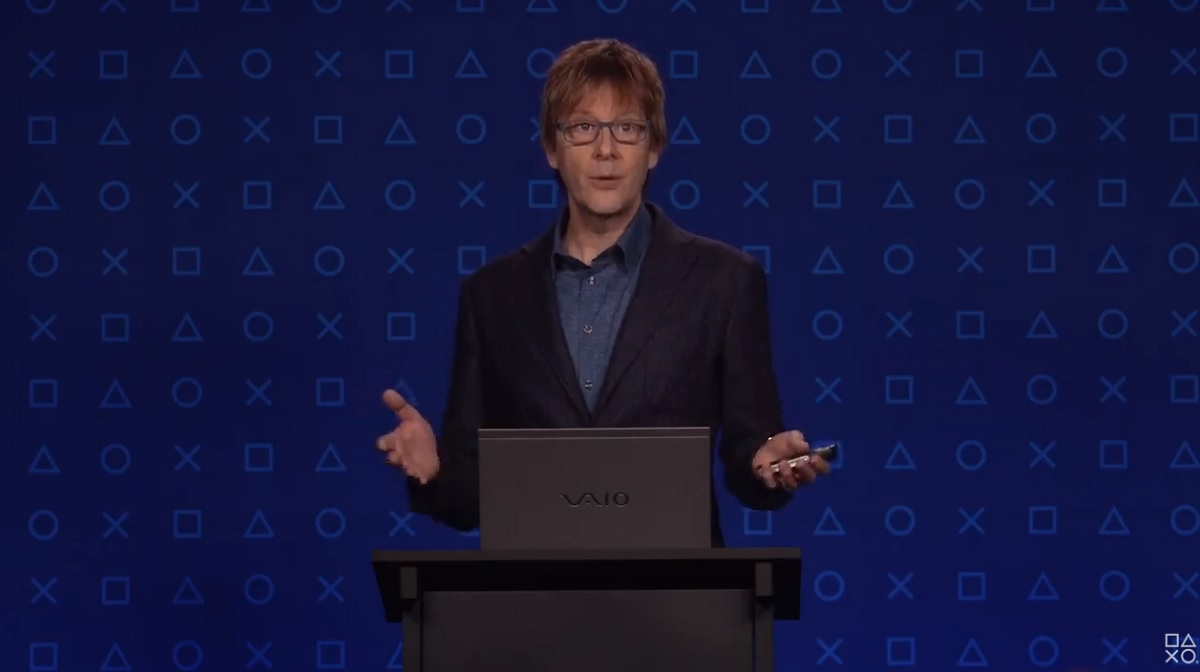 This rumor itself is harmless if presented as that, a simple rumor. However, some less than reputable sites and a massive amount of Youtubers made videos claiming this to be fact. Many of them assuring their audiences that they back checked with their own “sources”. It felt like such a sure thing to many, so much so when PlayStation unveiled their actual plan for backward compatibility. Bringing a majority of over 4,000 titles on PlayStation 4 forward with players that choose to upgrade to PlayStation 5. PlayStation even announced that many of these titles would be able to seamlessly use the upgraded hardware to improve performance on PlayStation 4 games. Improved performance on titles you already own such as Control, Days Gone, and more? Sign me up.

However, many people were quick to take to social media to bemoan the lack of backward compatibility with PS1, PS2, and PS3. To be clear, PlayStation at no point in the lead up to Mark Cerny’s PS5 talk had mentioned anything beyond PlayStation 4 backward compatibility. This was not a promise the company made or even teased. It was strictly fabricated by over-exuberant fans who want nothing more for the rumor to be true in order to score bonus points with their followers or subscribers.

It is Happening on Both Sides of the Fence

This is not exclusively a PlayStation problem, Xbox has also been host to ridiculous rumors. This was particularly at its highest after Xbox announced the acquisition of 5 studios at E3 2018. As soon as it appeared that Xbox was starting to gain access to big daddy Microsofts wallet, the rumor mill began. We saw a massive rumor that Xbox was looking to acquire EA. Not only did this rumor gain traction for an entire week, but it was also talked about as if the deal had already been signed and was just awaiting approval. Of course, this rumor never came to pass, to no surprise of many people that had a brain within their head. Will Xbox continue to purchase studios? Absolutely, they have even said as much. However, I do not think they are the studios that many fans have been hyping for.

PlayStation went through a similar bout of insane acquisition rumors after they acquired Insomniac Games last year. Insomniac Games joining SIE was a massive left hook from nowhere that not many were expecting. It was a strategic pickup by Sony and may prove to be one of the most important purchases in the next generation. However, this quickly led to many “insiders” running to ResetEra, 4Chan, and Reddit to make ludicrous claims. Remember when Sony was going to buy Rockstar Games and make GTA VI exclusive to PlayStation 5? Absolute nonsense no doubt manufactured buy someone with to much time on their hands.

Use Some Common Sense

As a fan of gaming, it is not your job to fact check every piece of news or media you consume. The creators of this content need to be held accountable for the information or in this case misinformation they spread. If it seems like it is too good to be true, then it most likely is. Rumors either are on the side of too good to be true or so ridiculously obvious that anyone could have guessed it. It is very important that when reading and discussing rumors to take everything with a large grain of salt.

Here is a clipped rumor from 4chan which I came across from notorious Twitter cat Alcoholikaust. For context, he was mocking this leak due to its sheer ridiculousness but let’s dismantle this “info dump” piece by piece. That is supposed to represent the upcoming PlayStation event planned for June. 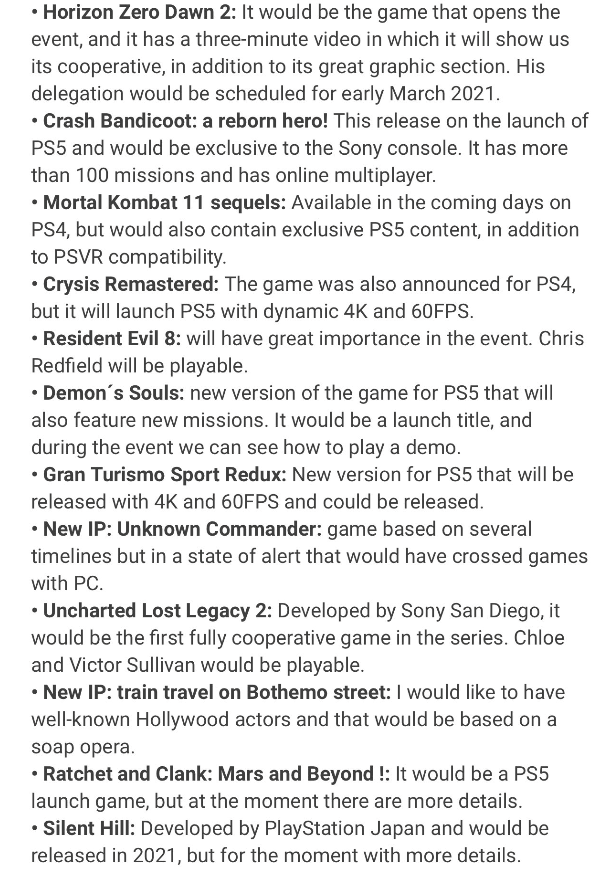 Aside from the fact that the grammar and sentence structure of this leak feels like it was written by a 5-year-old. There are many points of “what did I just read?” within this leak. Let’s start with the most obvious. Predicting Horizon Zero Dawn 2, when many within the industry have talked about it at length. As well as very reputable sites and journalists that have confirmed its existence is a slam dunk guess. Gran Turismo Sport Redux seems borderline moronic considering as discussed earlier, it contradicts PlayStation’s plans for backward compatibility. Demon Soul’s Remake is the worst kept secret in the gaming industry. It is all but confirmed that Bluepoint is working on the project as a launch title for PlayStation 5. The phrasing around missions convinces me that this person has almost zero experience with Demon Souls at all.

I cannot decipher the Mortal Kombat line at all, even after staring at it for 30 minutes and then smashing my face off my desk. It makes no sense, nor do I even understand how a PSVR version of Mortal Kombat 11 would even work. The bit about Resident Evil 8 makes sense, as we have heard many rumblings in regards to the future of the franchise. The Silent Hill rumor has been talked to death at this point, with Konami officially denying it in a statement. It leaves many of us scratching our heads to what is actually going on with that IP. The absolute cap on the nonsense that is this leak is “Train Travel On Bothemo Street”. It literally sounds like this particular persons’ wishlist for a new IP. No studio attached, or any details, just wishful thinking. The rest of this list is in the realm of, could it happen? Not likely.

While the leak I used was an incredibly bad example of an attempt to sound like an insider. It drives home the point that you should approach each and every rumor with a certain level of expectation. If you are a content creator, writer, or enthusiast, you provide information to an audience. It is important that you convey that information properly and give it proper context. If you are just a gamer looking for the latest information, always backcheck someone’s sources. If a Youtuber is claiming something outlandish, see if they backlinked an article or a forum page. Most importantly just take every rumor with the largest grain of salt. You will then be able to find joy in announcements instead of being endlessly disappointed by hype men and click farmers.