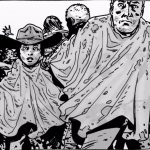 While the mainstream fans may think of The Walking Dead as a television franchise, the most fervent supporters recognize that the longest – and arguably the greatest – story arcs came from the original comic book series. With the real world quarantine period still in effect, I figured some of you might be craving something to read. The fine folks over at Humble Bundle know this and they are offering the entire run of this legendary comic book series for a ridiculously cheap price. Trust me, there are enough comic books in this bundle to keep you busy for a long time.

As is typical with Humble Bundles, this collection of comics from The Walking Dead comes in tiers with different price points. Whether you spend a dollar or a bit more, you will get lots of comics. Don’t worry, the highest-priced tier is still very cheap – especially when you consider how much content you are getting.

Here is what you get:

Spend at least $1 and get – The Walking Dead volumes 1 through 5. This covers the first thirty issues of the series.

The Walking Dead: FCBD. This is a collection of comic short stories featuring characters like Tyrese, Michonne and the Governor. These stories will not be reprinted in the trade paperbacks so it is a special treat to get them here.

The Walking Dead Survivor’s Guide. This is like a Who’s Who of the comic universe. You get bios for all of the characters who appeared at this point and whether they were still alive or not at the time of publication.

Spend at least $18 and get – the above bundles plus volumes 24 through 32. This will cover the rest of the series up to the final issue.

The Walking Dead: All Out War APEdition

The Walking Dead: Here’s Negan! A deep look at the psychopath antagonist who first appeared in issue #100.

Your comics will come in digital format, of course. You can download PDF files straight from the Humble Bundle website and there are other formats available that will work with popular ebook readers like Kindle Fire. I think it is pretty awesome to have the entire run of The Walking Dead loaded on to your device.

If you were to buy all of these volumes of The Walking Dead at regular price you would be spending over $450 USD. To get all of these comics for just $18 is a damn good deal and I hope you at least consider forking over a few dollars.