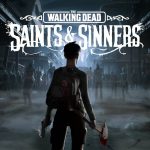 You are reading
The Walking Dead: Saints and Sinners Chapter 2 Announced

It wouldn’t be our second anniversary without a surprise. Hold on to your heads, tourists, The Walking Dead: Saints & Sinners – Chapter 2: Retribution is coming. 😈 #TWDSS #secondanniversary #Chapter2 #Retribution pic.twitter.com/ajibDagmKP

Given the game’s title, it sounds like a continuation of the first game. With that, we can imagine a 2022 release. Plus we may be talking about a potential PS VR2 launch title.

The Walking Dead: Saints & Sinners is a beloved first-person shooter, survival horror game for VR platforms. Currently sitting at an 83 OpenCritic score, Saints & Sinners has a 9 / 10 from IGN, 88 / 100 from PC Gamer, and a 9 / 10 from PlayStation LifeStyle. A sequel would make for one of the most anticipated VR games this year across Oculus, Steam, and PS VR.