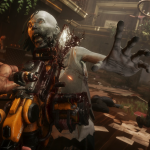 You are reading
State of Play June 2022: Walking Dead: Saints and Sinners Retribution Coming to PSVR2

On June 6th, 2022, Sony held a State of Play presentation focused on third-party titles and upcoming PSVR 2 games. The presentation included an announcement of four games in development for the upcoming PSVR2. Included in these announcements was the second chapter of Skydance’s The Walking Dead: Saints and Sinners, entitled Retribution.

Though originally announced in January, Wednesday’s showcase included our first proper look at gameplay. The announcement also confirmed that Skydance would release the title in 2022.

The Walking Dead started as a comic book series by Robert Kirkman that ran from 2004 to 2019. In that time, it spawned a notable TV series and multiple video games. Saints and Sinners follows that trend.

Many critics and consumers regard the first chapter of Saints and Sinners as among the best titles released for VR headsets. If all goes to plan, players will get to see if Skydance can match its quality later this year.