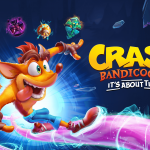 You are reading
Crash Bandicoot 4 Won’t Have Microtransactions

Nothing whips gaming forums and social media into a frenzy faster then microtransactions. This singular word can lead to death threats, boycotts, and all other forms of nonsense. This was quite evident earlier this week. When due to a listing on the Microsoft Store, a rumor began that Crash Bandicoot 4 would have microtransactions. This rumor quickly began to gain traction with fans being worried that the game could have more than just cosmetic items. Considering the game is published by Activision, its hard to disagree with fans’ paranoia.

The developer of the upcoming Crash Bandicoot 4 Toys For Bob, quickly stepped in front of this rumor. Today, on Twitter they quickly clarified that the game would contain no microtransactions. Also noting that the Totally Tubular Crash skins are included in all digital versions of the game. It is important that Toys For Bob got ahead of this rumor, and squashed it before it did damage to the reputation of the game.

We're seeing confusion about #MTX in @CrashBandicoot 4 and want to be 💎 clear: There are NO MICROTRANSACTIONS in #Crash4. As a bonus, the Totally Tubular skins are included in all digital versions of the game.

With the future looking bright for Crash Bandicoot 4 with no microtransactions, fans can rest easy. Knowing they will be getting a hopefully great next installment in the Crash franchise. This is the first new main installment in the franchise since 2008. Fingers crossed the game delivers on what its long time fans are hoping for.

Are you interested in Crash Bandicoot 4? Let us know in the comments and don’t forget to check back for the latest gaming news and information.

Battlefield 2042 Multiplayer Focus is Too Much