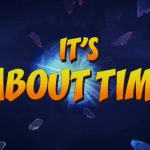 That’s right Crash fans! Although hardly a surprise any more Crash Bandicoot 4 is officially returning on October 2nd and It’s about time!

The original remastered trilogy was a huge success and it was pretty obvious that there would eventually be a follow-up in terms of a sequel. All that remains to be seen is whether the sequel will live up to its name, but honestly, we don’t even doubt it.

It’s About Time – for a brand-wumping new Crash Bandicoot™ game! Crash fourward into a time shattered adventure with your favorite marsupials. Neo Cortex and N. Tropy are back at it again and launching an all-out assault on not just this universe, but the entire multiverse! Crash and Coco are here to save the day by reuniting the four quantum masks and bending the rules of reality. New abilities? Check. More playable characters? Yep. Alternate dimensions? Obviously. Ridonkulous bosses? For sure. Same awesome sauce? You bet your sweet jorts. Wait, are they actually jorts? Not in this universe!

Crash Bandicoot 4 is available for preorder right now and will be playable on October 2nd on XboxOne and PS4 with a small caveat. At the end of the video, Xbox Series X is mentioned in the same manner as XboxOne while there’s no mention of PS5. Our best guess is that it’s a hint of Xbox Smart Delivery feature meaning that if you buy the XboxOne version of the game you will be getting the next-gen version included with this purchase.