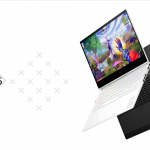 In an era of gaming where big-budget graphics come at high-performance costs. The options in the PC space, such as laptops, graphics cards, and CPUs alike grow to match that demand in price, size, and heat generation. The mission for the HP Omen 16 line is simple in that case. Create a laptop with high-performing parts, great displays, unique heat dispersion, and awesome audio output.

Then take that design and couple it with a decent price range and durable design to play the hottest PC games, and perform a range of day-to-day tasks like writing, live streaming, listening to music, and watching TV shows or movies. The HP Omen 16 line came out swinging with the specs. As someone who demands nothing less than a quality experience on all fronts in that respect, the hardware left me very impressed.

The HP Omen 16 line comes with 6 different choices of hardware to choose from with prices ranging from $969-$2689.

We were provided with review hardware for the mid-range system containing a Ryzen 7 6800H CPU, 16GB of GDDR5 RAM, an RX 6650M, and a 1TB PCIe Gen 4 SSD. The system also supported a modest 16.1″ FHD 1080p 144hz display with 300 nits brightness. The system has three USB-A 3.0 ports along the edges in addition to a combo audio jack for headphones, two USB-C ports, an HDMI 2.1 port to expand your display, a standard ethernet port, and a full-size SD card reader. All these ports share space in between the many vents for the laptop’s cooling system. All this is wrapped in a bow of Bang & Olufsen audio speakers. 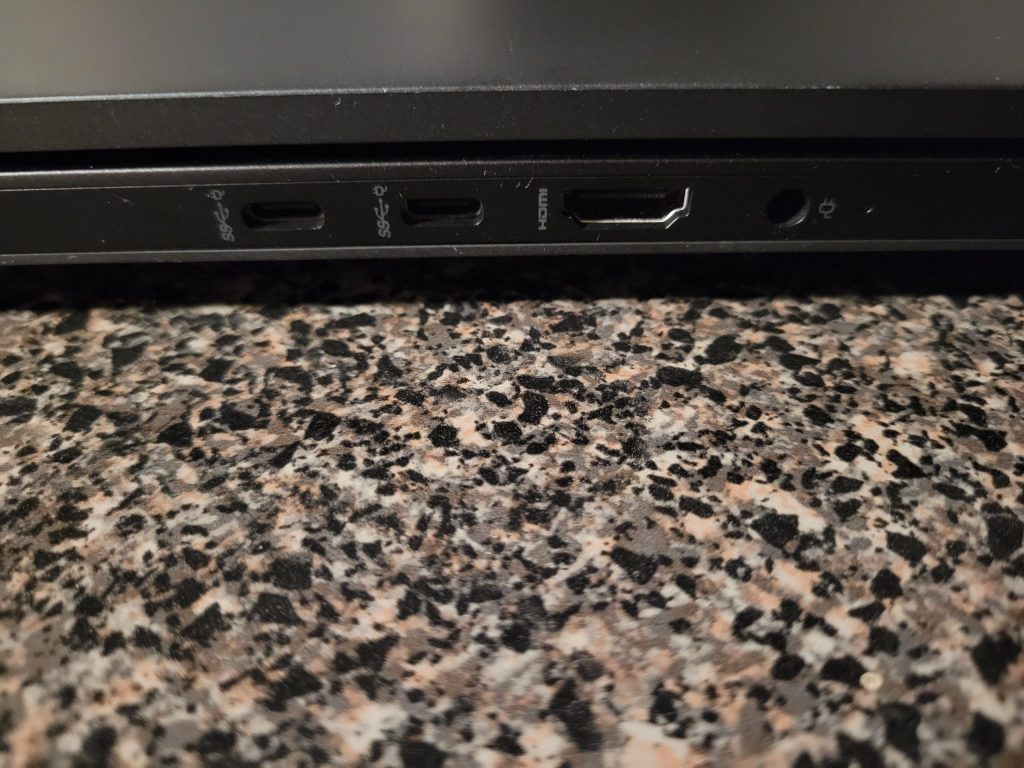 One key port that I appreciated was the power cord input was located in the back of the laptop. This did wonders to reduce the hassle of having my controller or ethernet cord get tangled up with it. It also features an easy-to-reach power button that is nested on the keyboard along with buttons for the Omen Gaming Hub and Calculator.

While boasting such a slick design on the outside. Many improvements internally have been made to the Omen 16 line as compared to the Victus line. 24% more fan blades have been added to the cooling system to further keep the machine going for gaming sessions nearing the double-digit hour mark. While it does stay cooler for the GPU and SSD specifically, this comes at a cost. The system tends to run quite loud if the game audio is not raised to at least the halfway point on the audio output to drown it out. While I tend to play games with headphones on, while testing the speakers I could still hear the noise from the fans faintly.

If that was the extent of it, that would not be such an issue. However, any time a firmware update was pushed, the fan noise became very noticeable. The fans ramped up in speed and noise to a jarring degree. Fortunately, this was the only instance of them reaching that level of noise. 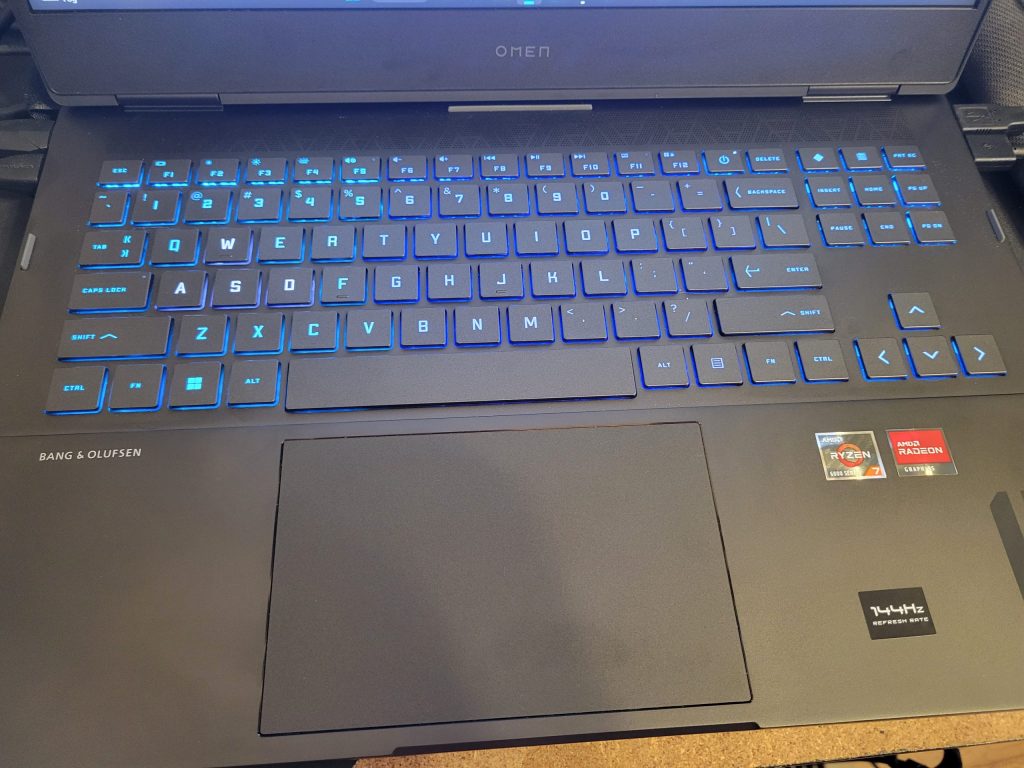 The form factor of the Omen 16 is very subtle and compact for the technology inside. The interior chassis sports a big branded 16 on the corner underneath the keyboard. The keyboard is very tactile and the RGB under each key can be customized inside the Omen Gaming Hub. The considerable hours I spent putting the system through its paces were made more enjoyable in the glow of pure tranquil blue while gaming or writing with no discomfort to my fingers.

The 16.1″ screen of the AMD Omen 16 always got the job done. While playing a variety of games, it produced a clear picture throughout. But its lack of HDR support does a disservice at its price point. It never allowed for colors to truly pop. Which was a shame in games such as God of War, or Bright Memory Infinite. However, the screen’s 144hz display compensates for the clarity with noticeable smoothness.

One small issue with the screen I had was its stability. The smallest tap on the screen causes it to wobble back and forth slightly. It never got in the way while playing games but I would have preferred the hinges to be more firm.

The HP Omen 16 holds its own very well across a broad spectrum of games. My testing included both recently released titles, as well as some newly ported games. God of War maintained a steady 60fps throughout my playthrough with the highest settings possible. Similar results were witnessed for high-speed games like Bright Memory Infinite, and Forza Horizon 5, where they boasted framerates near or above 120fps with high settings. 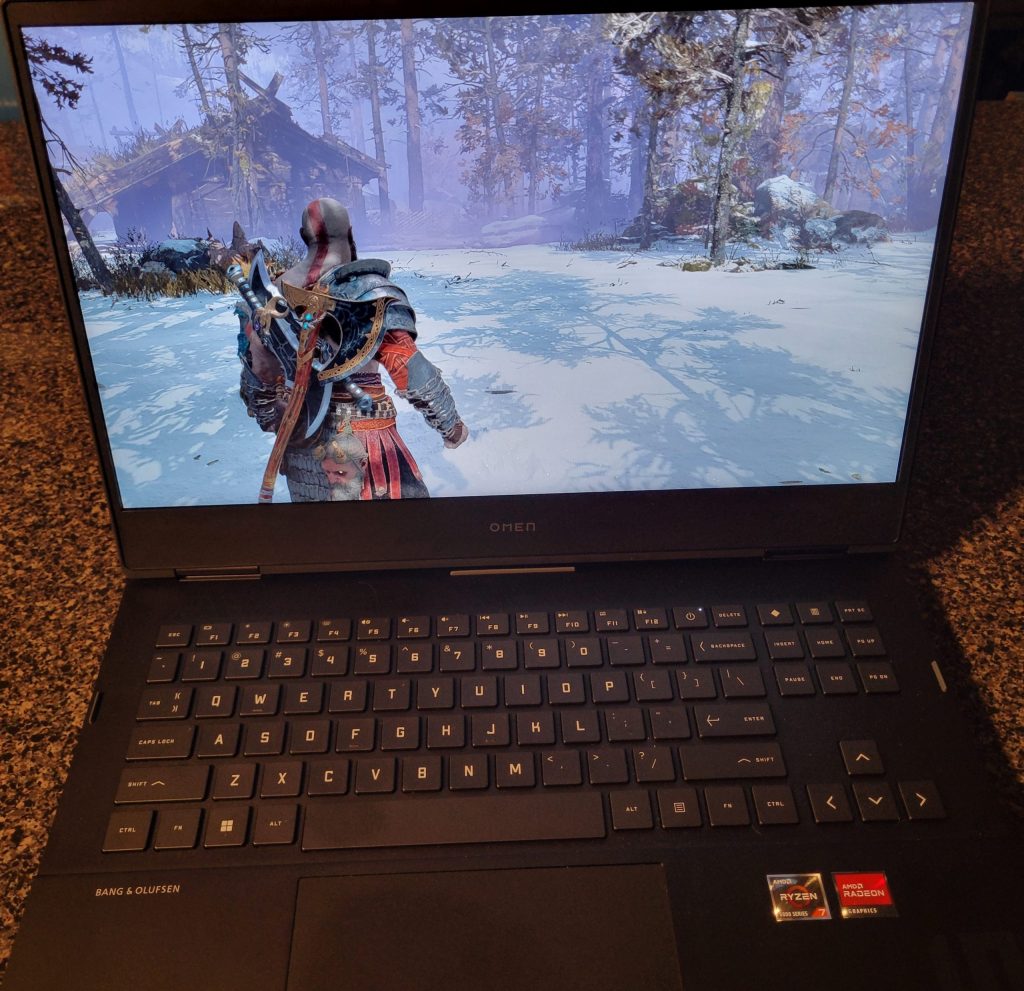 Playing through Hellblade: Senua’s Sacrifice on its highest settings with medium raytracing enabled also held solid at 60fps with very few minor dips in between. However, gaming without the power cord results in the hardware throttling so as to not eat up its battery too quickly.

If you are on the go and cannot plug in the laptop, do not play high-intensity games. It will produce a less-than-suitable experience. Loading into God of War, for instance, dropped to the 30fps mark while also slowly loading in-game assets. Given that this is a laptop, I would have hoped for a little better juggling of hardware assets to accommodate for playing on battery power.

Putting the Omen in Line

The Omen Gaming Hub is an essential part of the laptop. As mentioned before, you can customize the RGB in the keyboard, but it does not stop there. The gaming hub is home to statistics such as being able to check the hardware temperature. It also presents options for being able to optimize games and free up RAM usage or delete unnecessary files from the device.

The gaming hub can also be used to navigate your most recently played games to jump back in with ease. I always appreciated the boost it gave the games by pausing background processes and CPU usage outside of the game. It also provides the ability to switch between games from within the hub. It is a light and snappy application that is well worth taking advantage of to enhance the experience.

The results from using PC Mark 10 for benchmarking yielded exceptional results. As it landed in the low 7000s with its highest scores in:

High scores were also given to:

It also received high scores in writing, which I can attest to given that I am writing this review on the hardware. The only low score was given to video editing. But the overall results of the benchmark go hand in hand with my near month of testing the device.

The battery is no slouch either. The device was easily capable of handling 8 hours of low power draw writing time or higher intensity applications such as video streaming.

Final Thoughts on the HP Omen 16

As someone who games on a PC and has a custom-built desktop. I was eager to see the differences in this pre-built and customized comfortable laptop. The HP Omen 16 does not disappoint in the grander scheme of things. It does not feel overly heavy, nor does it feel so light as to feel cheap. The negatives such as the lack of HDR and the wobbly screen are the types of details that can easily sway someone from dropping the significant amount of money on a gaming laptop as is required to buy in. The HDR in particular feels disappointing as this would truly place the laptop into the elite of the gaming laptop world.

But despite those flaws, for the mid-range pick of the Omen 16 line. I can still recommend it due to the fantastically short time that I had with it. At its price point, it is a substantial upgrade to my personally built PC and one that is built to last.