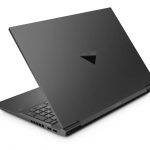 The HP Victus 15 is a relaunch of sorts for HP’s aspirations in the ultrabook category. The previous HP Pavilion line had seen a strong run, but this year, the team went back to the drawing board. A fully redesigned external chassis accompanies beefed-up internals to produce a laptop that emphasizes the ‘ultra’ without sacrificing too much of the sleek design of netbooks. The HP Victus 15 is a stellar piece of hardware that is well worth a look with a price tag that feels like a bargain.

The HP Victus 15 comes with the label as the new entry-level ultrabook PC from HP. It boasts a 15.6″ 1920 x 1080 screen with a 144 Hz refresh rate. It comes loaded with an Intel Core i5 processor and 8 GB of DDR4 RAM. The RAM can be upgraded to 16 GB as part of a modification which includes upgrading to either an AMD Ryzen 7 5800H processor and AMD Radeon RX 6500M for $999.99 or an Intel Core i7 and NVIDIA GeForce RTX 3050 TI for $1099.99. The RAM can also be upgraded post-purchase. The baseline i5 model was provided by HP for this review. The laptop comes in Mica Silver, Performance Blue, or Ceramic White.

The hardware includes a USB-C, Ethernet Port, USB-A, and HDMI 2.1 along the right side. On the left side, is the charging port, an additional USB-A port, combo audio jack, and full-size SD card reader. The power button is in-laid into the full-size keyboard with a 10-key number pad. The system also features an oversized touchpad. 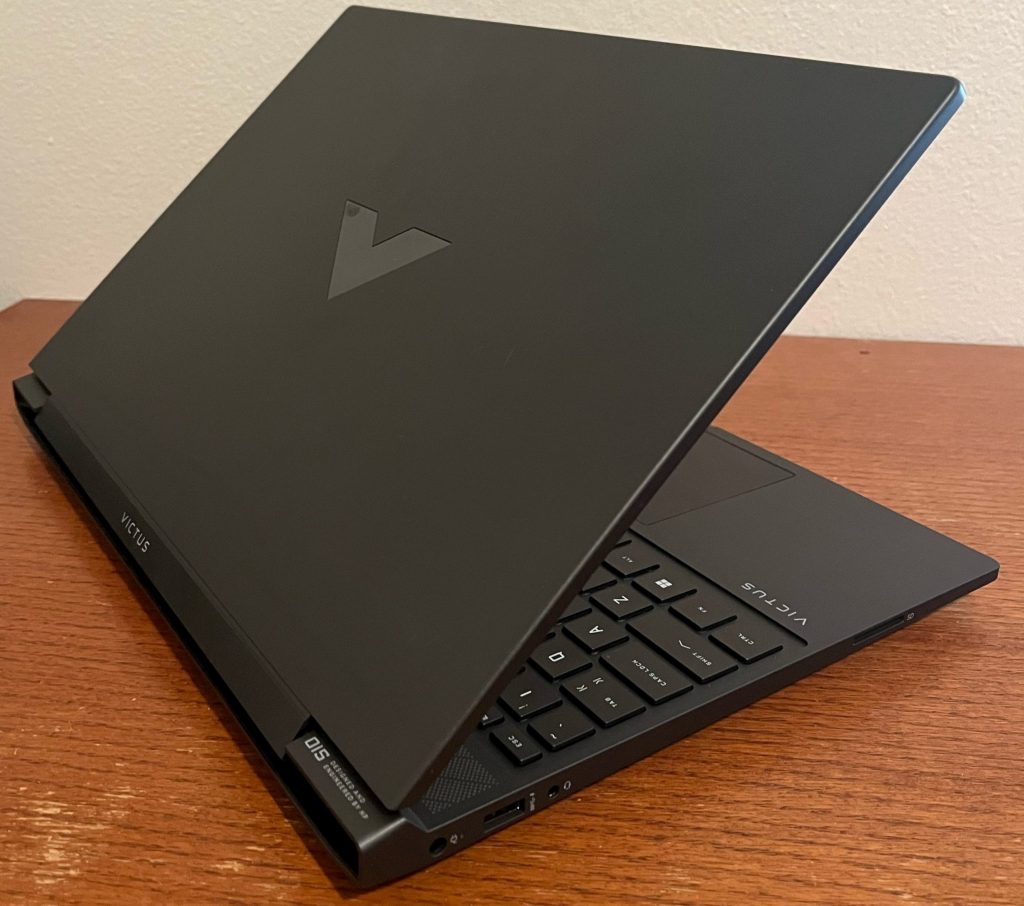 In terms of form factor and build quality, the first thing that jumps out is HP’s commitment to the HP Victus 15 rebranding. The thick stylized “V” design can be seen embossed on the chassis and just below the screen as well as in the design of the speakers which sit above the keyboard. Rather than coming across as an overwrought bit of branding, it is sleek and utilitarian. The design breaks up the otherwise nearly uniform matte charcoal silver (or blue and white if you prefer) color coating. Compared to higher-end gaming laptops, the Victus definitely takes advantage of its smaller internals to produce a machine with a stylized form factor. Gone are the chunky and unsightly bezels that characterize the top-of-the-line gaming hardware. It is replaced with a slightly recessed keyboard, soft edges, and an oversized trackpad.

The trackpad is immediately noticeable for its girth. Taking up nearly a third of the available real estate, I had concerns given my obnoxiously large hands. For productivity purposes, the large pad is quite useful. Doing image processing, web scrolling, and working, the large trackpad gave a pleasant amount of throw. Though I personally would rarely use a trackpad to play anything more complicated than Tetris, the size of the trackpad becomes problematic when using it for aiming and shooting as I consistently would trigger multiple contact points. This is a rare use case but is worth noting. Playing with a mouse and keyboard or a controller is really the way to go. 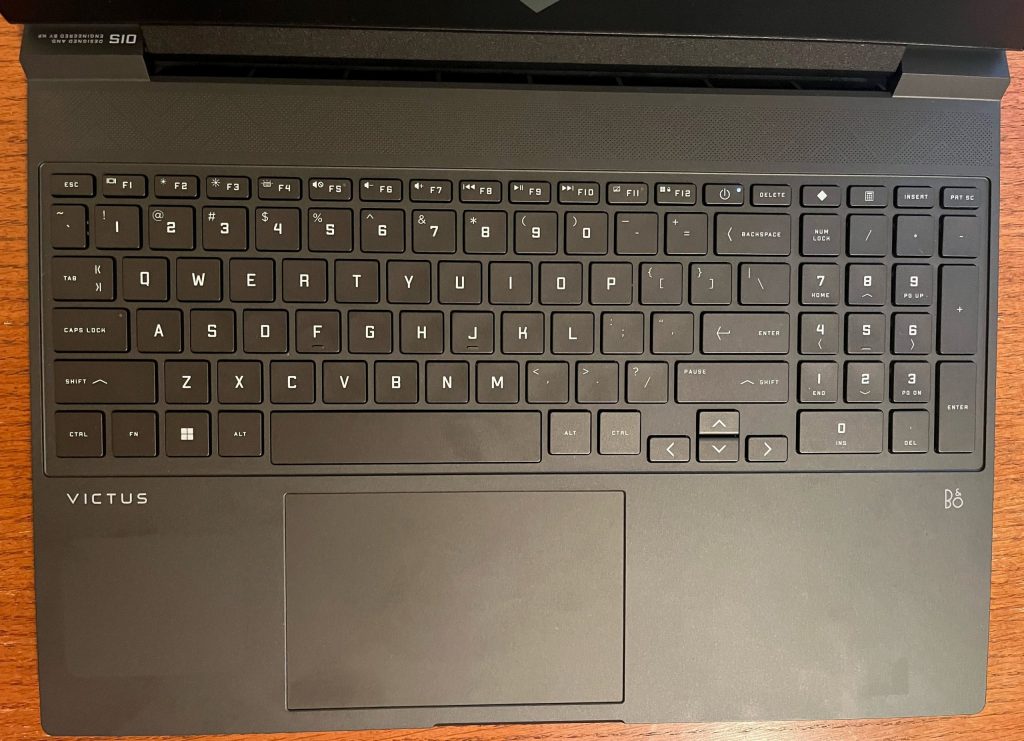 The keypad has an excellent build quality to it. The keys are well spaced and the ten key number pad fits well in the available space. It is clear the emphasis HP is placing on the integration of their Omen Gaming Hub, given that there is a dedicated key on the keyboard for it as well as, bafflingly enough, a calculator. Perhaps I am too used to doing my calculations in Excel or MATLAB, but I can hardly fathom why a calculator would require a dedicated key. I would have preferred more traditional dedicated keys, such as Pg Up/Down.

The keyboard backlight is a comfortable monochromatic blue that does wonders for working at night and looks incredibly sharp. The speakers provide adequate performance though is nothing to really write home about. The dual speakers sit above the keyboard and have trouble with deep bass sounds. Cranked to maximum volume, the speakers are good enough, but a pair of quality headphones is really a must. The speakers really are the weakest part of the hardware package. 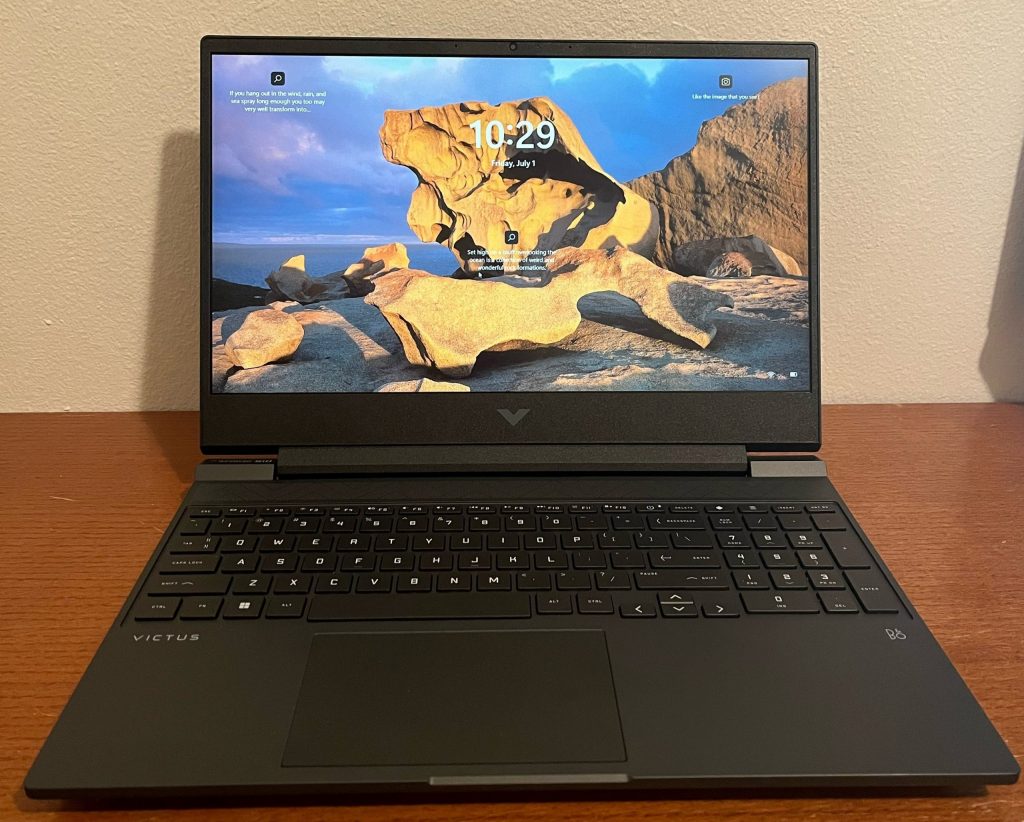 In terms of heft and weight, the HP Victus 15 hardly feels like it belongs in the gaming category. Despite the 15.6″ screen, it feels almost absurdly light and portable. Though at 5.4 pounds, it is not going to fool anyone into thinking it is a netbook. However, it is thin enough that it fits comfortably into a satchel bag or backpack for easy transport. The screen itself is gorgeous and renders its native 1920 x 1080 resolution with ease. The colors are crisp and the 144 Hz refresh rate gives even fast-paced action in FPS games a buttery smooth feel.

The screen struggles with truly deep blacks, but aside from that, it is a vibrant display that does little to disappoint. The same can’t be said for the camera which is clearly where corners were cut. Images taken with the camera are grainy and look like a cell phone camera from a decade ago.

Before moving off of the hardware and into performance there are a couple other factors worth noting. The power cable, a USB A port, and headphone jack all sit very close to one another on the left-hand side of the PC, and it gets pretty crowded. Additionally, the case is thin, so thin in fact that the USB ports require some degree of effort to plug cables into them to the point that I was concerned I would break them. The thermal design deserves a special call-out. According to the internal specs, it is a 146% improvement on the HP Pavillion 15, and it feels it. Even after running Outriders on Ultra for multiple hours on my lap, the PC still felt cool. The exhaust vents are angled along the rear of the chassis and it does wonders for keeping the PC cool.

Despite being advertised as an entry-level PC, I was determined to put the system through its paces. I selected a handful of games from the last two years to test out. I started with Chorus, a 3D arcadey space shooter. After cranking the settings, I waited to see the frame rate chug when enemies filled the screen. I was pleasantly surprised to see it bottom out at 60 FPS while playing. The new expansion for Outriders showed similarly strong performance, and the dedicated GeForce GTX 1650 graphics card is a big improvement over the integrated graphics card of the Pavilion line. You are not going to see individual hair follicles, but clear, crisp textures were seen across titles.

Shifting to online multiplayer, the HP Victus 15 comes equipped with a dedicated ethernet port, though its wireless card is more than robust enough for Destiny and Halo Infinite. Even with High graphical settings, the frame rate showed variation, but never dipped below 40 FPS. The HP Victus 15 performed virtually indistinguishably to my MSI GL65 Leopard. There was no trouble holding up under the chaotic conditions of online co-op or PvP. The system not so much roars to life as it confidently ramps. The oversized intake vents do an excellent job keeping the system fan noise down especially if the laptop is on a table. As far as performance is concerned, the HP Victus 15 more than holds its own when it comes to being a hardcore gaming device. 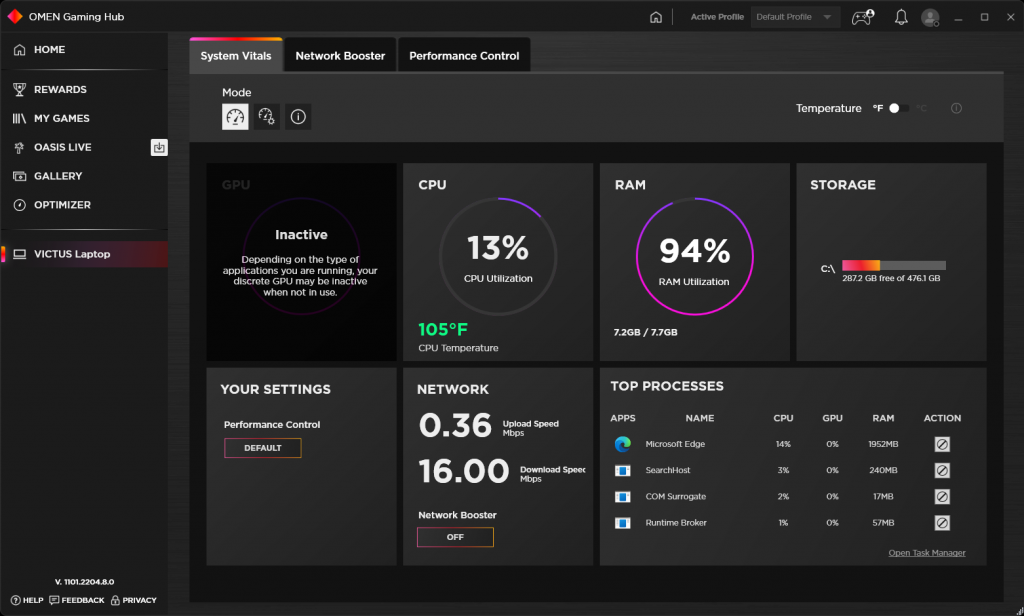 I mentioned the Omen software suite, which gets a dedicated key on the keyboard. This is HP’s all-in-one software solution that is supposed to serve both utilitarian and stylistic functions. The Optimizer is supposed to enable real-time optimization of programs. Having only had the laptop for a week, there is hardly enough time to accumulate sufficient background processes to make the optimizer really feel necessary at this point. However, it seems like a smart integration as opposed to paying for something like Avast to do the same task.

The system does not adapt to the hardware though, so things like Light Studio, have no function on the HP Victus, and seems there to remind you that HP offers fancier computers for you to eventually try. The library feature though is truly convenient in that it collates your games from your different launchers (Steam, Game Pass, etc…) and lets you launch straight from there. It ultimately feels like a perk of the system, but unnecessary.

Using PCMark 10 as the benchmarking score, the HP Victus 15 received a score in the mid-5400s. Its biggest knock came in its video playback. The Victus offers a notable improvement in battery life over the HP Pavillion 15. It can quite reasonably handle a day’s worth of productivity work. Albeit without the screen at full brightness. The battery is more than enough to handle a cross-country flight’s worth of movie time. It clocks in at over 5 hours watching local video in our battery test. The battery does quick charge, getting to a full charge in about forty-five minutes from being fully drained.

I was skeptical about the HP Victus 15 coming in. The ultrabook category of laptops has always felt like a no man’s land. Yet I am walking away with the idea that this will replace my MSI gaming laptop as my laptop of choice on the go. Its vibrant screen, excellent hardware design, and well-realized spec sheet mean that it gives quite the bang for your buck. At under $800 MSRP, this laptop is an easy recommendation for those wanting to dip into the world of PC gaming while still having a laptop that you can feel comfortable using as a dedicated work machine.