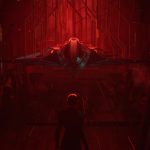 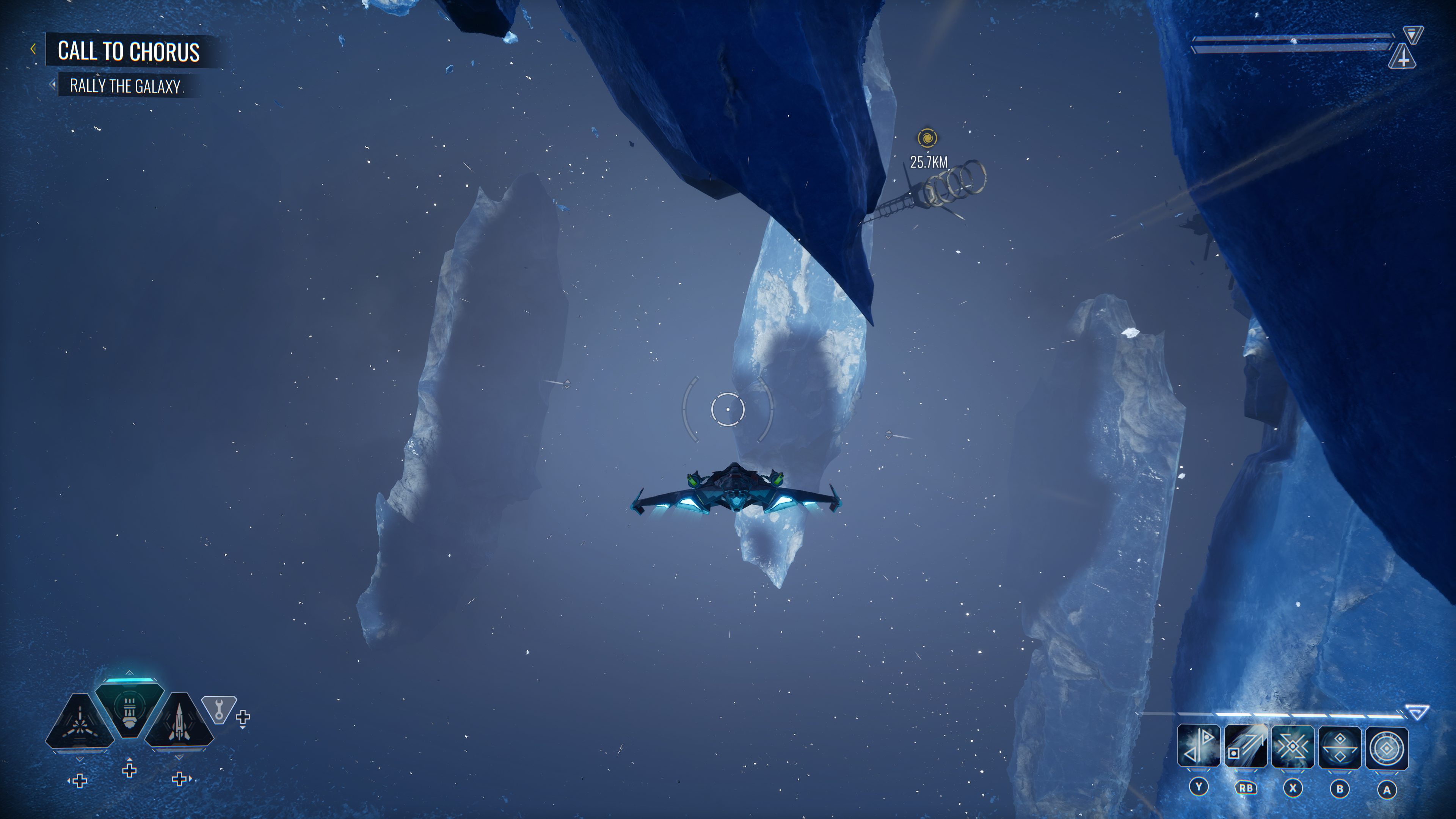 Chorus is an open space adventure shooter developed by Deep Silver Fishlabs. In Chorus, the Circle, a fanatical human faction, seeks to harness power from an ancient evil species through the far reaches of space. Over the course of granting these powers to their disciples, one becomes too powerful. After causing a cataclysmic event, young Nara fears the power she has and hides amongst those who do not wish to conform to the Circle. Her hope is that her façade can keep her safe, but will this protect her forever? Not likely.

A Girl and her Ship

In a galaxy torn between the Circle, the Free Militia, Pirates, and the Resistance, Nara tries to start a new life as a scavenger. She performs mundane tasks for a safe haven called the Enclave run by the Free Militia and defends the civilians within from pirates. But no one can escape their past forever. When the Circle attacks the Enclave, it is up to Nara to use her skills to fight against the group she once called family. 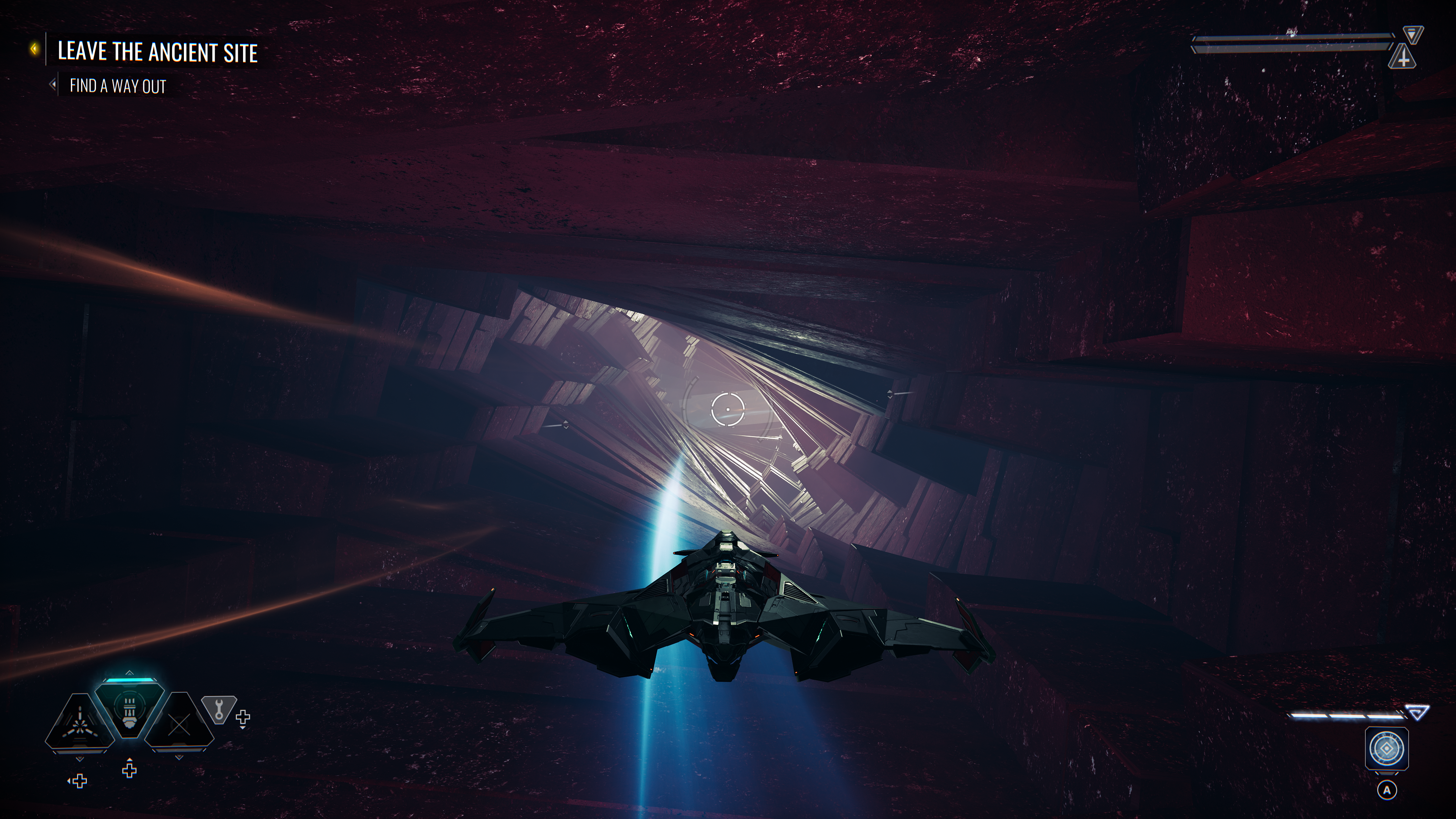 In order to have a fighting chance, Nara needs to regain the power she left behind. Nara’s search begins by retrieving her former ship, Forsa, in the depths of an ancient alien structure. Finding Forsa is more than just a simple fetch quest. Forsa feels betrayed by Nara who abandoned her, and their reunion forces Nara to reckon with the consequences of her past actions. She needs Forsa, but her fear in her youth of what she was becoming led her to abandon him.

Naturally, Nara and Forsa come together by virtue of their history. This makes for a compelling dynamic in the background of their fight against the Circle and their grip on the galaxy. Their trust issues form the emotional core of the experience in a way that is brought to life through the excellent voice acting performances by the two as they play off each other naturally. It becomes a recurring theme, Forsa not trusting Nara after being abandoned, and Nara not trusting herself with the power she has access to.

The overarching war of Chorus will take you to several locations across the galaxy. Each one hosts their own unique visual style and vast sandbox to play in. From the asteroid fields of Stega, to the jagged and dark reaches of Amarok and the lonely icebergs of the Kinuuk fields, no two locations feel the same to explore. Each location comes packed with unique side quests and resources to find throughout. The game never feels linear, despite the focus on the war against the Circle.

Stega is where the Circle finds the Enclave and Amarok is where you begin to take on an alien faction the Circle is using in their conquest. It expands the dynamics of the war Nara has gotten herself involved in. Things are not as simple as they should be. As she begins to learn how crazy the leader of the circle and her mentor, the Great Prophet, has become. But the story excellently paces the many plot threads it has. Nara and Forsa over time mend their fractured bond, but when the game focuses on that, it is never out of place. Each moment is earned, it holds weight and adds so much to the overall narrative. 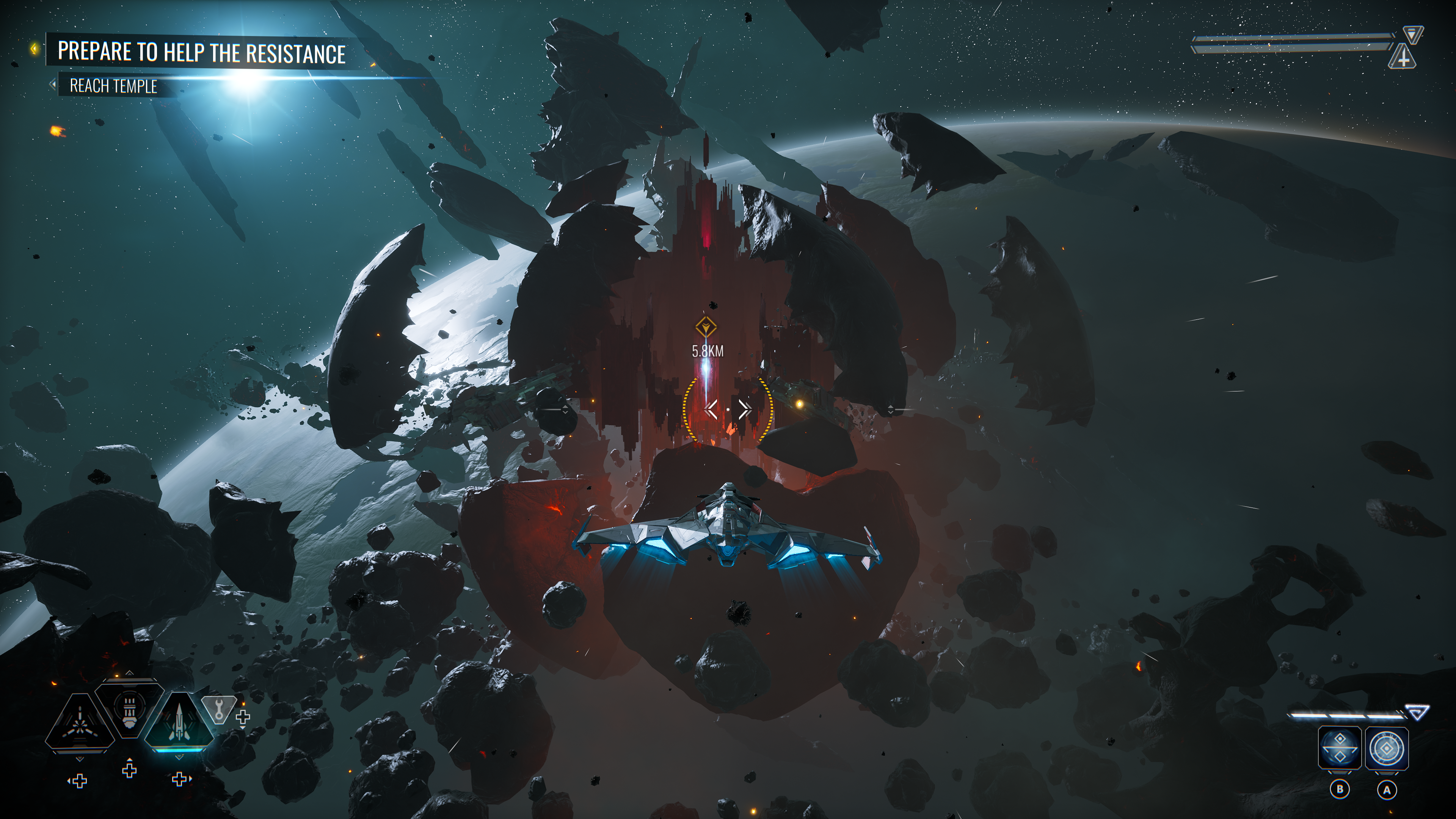 When it focuses on the war, the narrative is tonally hectic and serious with very little room to breathe, which is a good thing. Not only do Nara and Forsa have to fight against the Circle, they also have to earn the trust of other factions for the long war ahead. During her time with the Circle, Nara wronged many of the galaxy’s factions. Now, she has to go out of her way to save them from attacks from the Circle and take charge of the war. The game excellently executes its overall adventure. Your momentum will never be stopped in order to clear millions of icons off your map and when the game is out of surprises, it closes out with a satisfying conclusion to the war and the emotional journey Nara and Forsa have.

I do not play many arcade flight games, so the ease of access in Chorus’s gameplay was refreshing. The flying feels incredibly smooth when you are in and out of combat. When exploring you have a visual radar ability to find objects of interest in the environment. It makes finding boxes containing currency and upgrades or mission objectives easy to do if you want to use it. In addition, you can charge the ability to scan the entire zone you are in to find side quests. It encourages you to slow down and explore at your own pace. 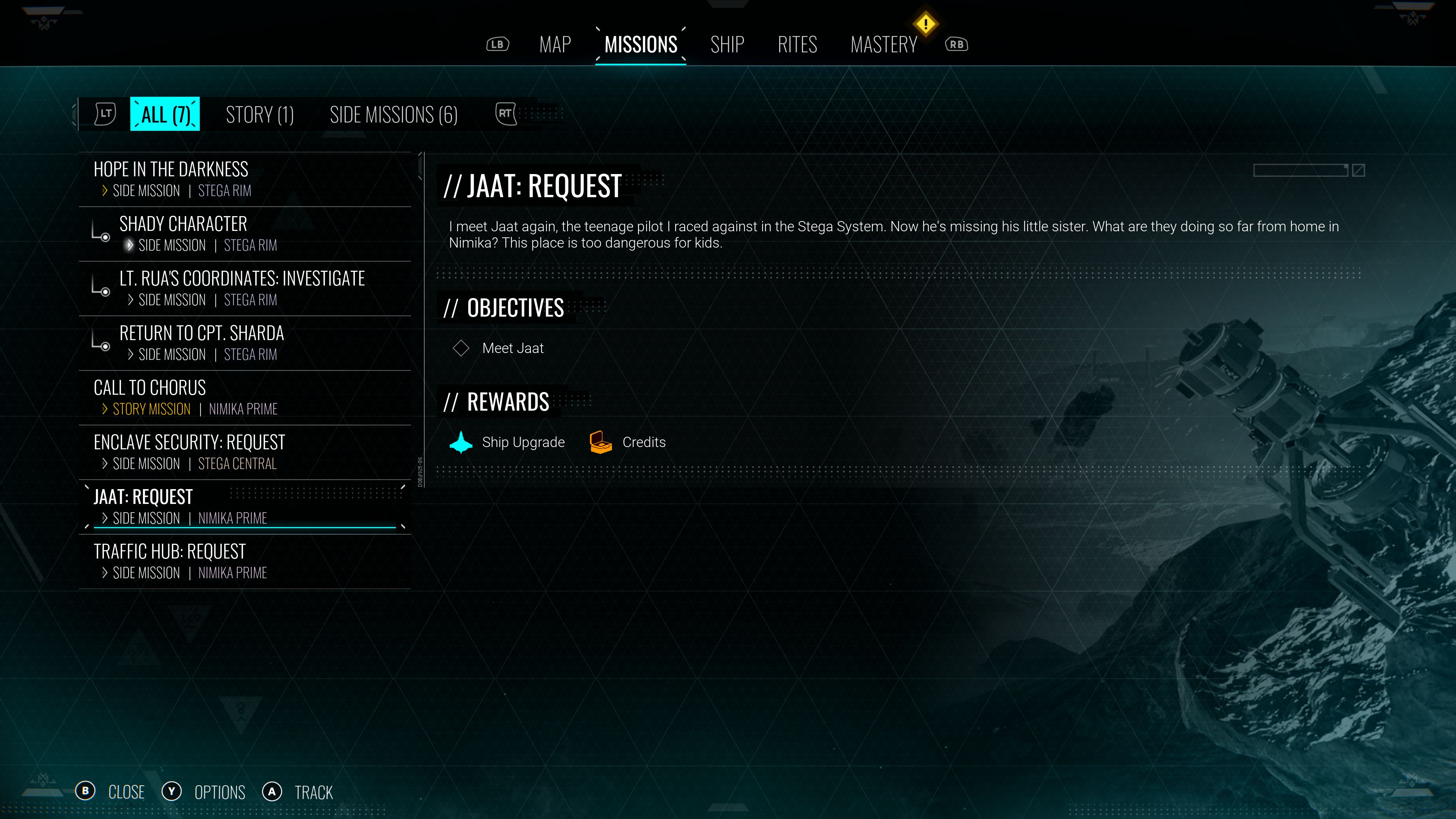 In combat, the fluidity of barrel rolling and controlling your ship’s momentum is extremely intuitive and satisfying. Most enemies will buzz around you taking shots. It makes slowing down to lock on or flying around at top speed free firing equally viable options. The challenge comes from the vast enemy variety in Chorus. Mowing down several low health or minorly shielded enemies easily can be balanced out by a heavily armored and shielded ship that can kill you if one wrong move is made.

The boss fights are an uneven mix. One was honestly the coolest boss fight I’ve seen in a game in a long time. The sheer scale of the enemy and the unique way to take him down was an awe-inspiring experience. Juxtaposed to it is one comedically imbalanced one. Taking several tries in an enclosed space while it dealt too much damage felt very unfair even on the game’s medium difficulty. But they put the fast-paced and enjoyable combat system to the test. That combat system is elevated by the Rites and equipment you unlock throughout.

Forsa is a boon for Nara as he allows her to reacquire the magical abilities, or Rites, she was given while in the circle. Each Rite is found as part of the main quest and serves purposes in both gameplay and exploration. Some areas will require you to teleport through gates or destroy crystals with an electrical blast. This opens up different ways to explore the already vast zones of the game. But they are also very handy in firefights. You can use these same abilities to teleport behind enemies or zap their shields away.

The game also allows you to build playstyles around them with unique equipment you can find throughout the game. One set of equipment allows you to spam your Rites after earning consecutive kills using them. While a different set can focus your playstyle on a specific weapon type. You have a regular gun, a laser, and a missile launcher. A specific side quest can give you an overpowered rocket launcher with a set of equipment to boost its power. 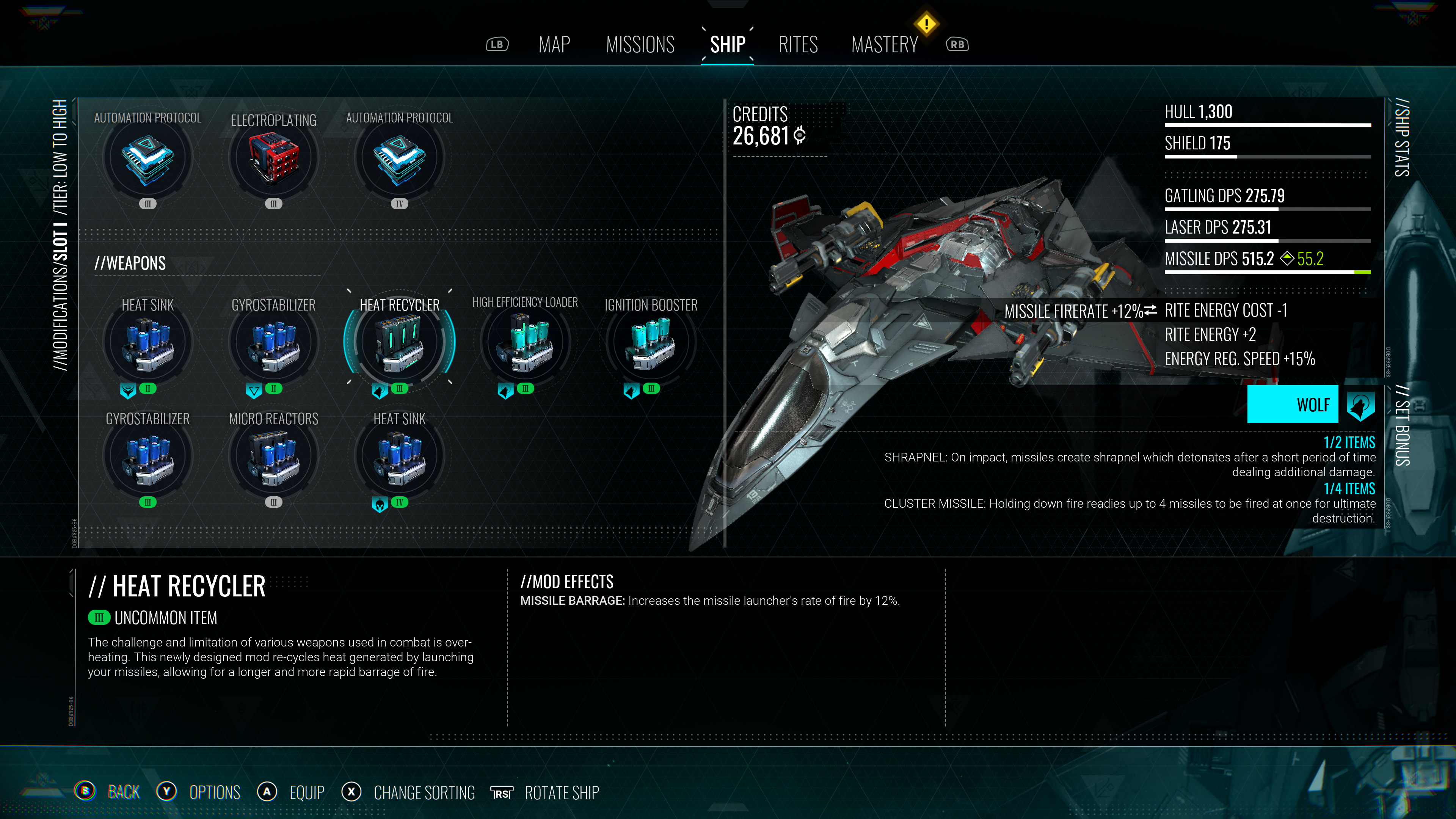 There will always be trade-offs though, as you can not use the Rite-focused and the missile launcher equipment together. So you can be stuck thinking about what is best to use during sections of the game, and be able to change if you misjudged.

During my time playing Chorus, I noticed only a few issues throughout the game. In one section where it pulled my camera to focus on something, it never returned. But reloading the checkpoint fixed it, like the other issues I experienced. There was a UI bug when my health was low, and after I restored my health, the game never fixed the red on the screen or the audio being low. However, these were minor issues in a visually striking and silky smooth game. 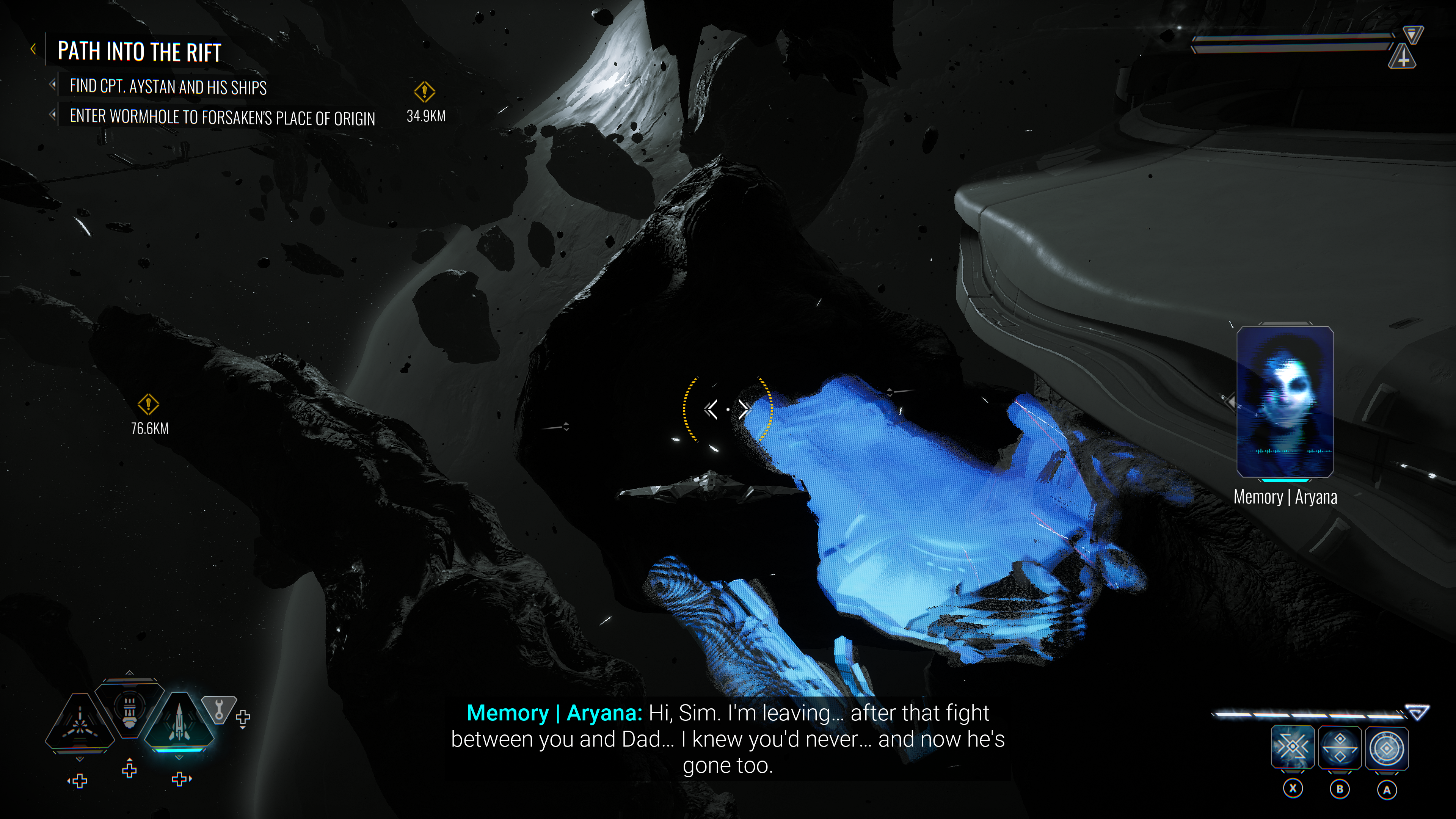 I played on the Xbox Series X in performance mode. It was beyond beautiful with seemingly no drops in framerate. Loading into the game from the main menu and reloading checkpoints take mere seconds. Its overall presentation is complemented by a very memorable soundtrack. It sounded very alien, using techno beats, epic orchestral arrangements, and chanting. The game’s sound design and voice acting are also incredible, making it into an audiovisual feast.

Chorus is an absolutely excellent experience. Its story never felt dull. I loved watching Nara and Forsa mend their broken relationship and breathe in the excellently built zones and its deep lore. Despite not playing many games like it, the gameplay was accessible and enjoyable. The game is visually stunning with a soundtrack that meshes excellently with the setting of the game.

If it were not for the one imbalanced boss, and the minor bugs I experienced, this would have been a perfect experience. Still, these are minor quibbles. Chorus is a game that should be on everyone’s radar heading into Game of the Year discussions. As only in Chorus will you be surprised and amazed by what the developers crafted.