There is no need to speculate on next-gen Xbox technical details anymore as Microsoft has decided to fully reveal Xbox Series X specs today. We did learn some of the tech and specs information from Xbox in the last few weeks but now we have a full breakdown.

As per Xbox Wire, the Xbox Series X will ship with 52CUs RDNA 2 based GPU clocked at 1825MHz, 8 core Zen2 based GPU clocked up to 3.8GHz, 16 GB of GDDR6 memory and 1TB of very fast NVME SSD. On top of that, we will be able to expand the storage up to 2TBs with a 1TB SSD Storage expansion card. 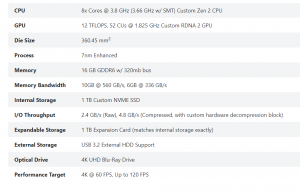 We will cover all these new features in a separate article very soon.