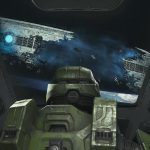 When the Halo Infinite campaign was revealed last year, I was incredibly apprehensive of what was shown. While many people were concerned about the visuals and fidelity of the trailer, I was more worried about the core base of the game that is Halo. Undoubtedly a game has to grow and change as the years go on, while also attempting to maintain its core that fans fell in love with it. We have seen this done beautifully, with DOOM most recently as the franchise found new life with DOOM (2016) and its follow-up DOOM Eternal. After spending several hours playing Halo Infinite‘s campaign this past week, I can safely say 343 is close to catching this same kind of lightning in a bottle. The opening missions of Halo Infinite felt like a trip down memory lane in terms of their layout. To start off you are fighting through an enemy’s craft as you try to scuttle the ship to buy yourself time to escape. One of the first things I noticed while playing these levels was the verticality of the levels. This is something that becomes more and more prevalent the further you progress in the game. This verticality leans heavily into the use of the grappling hook, which we will talk about later. But the major improvement of Halo Infinite is by far its level variety and further pushing Halo away from falling into being a simple “hallway shooter”.

In the levels, I had access to explore ships, massive mountains, and a semi-destroyed ring. If this variety can continue throughout the remainder of Halo Infinite, I would be incredibly impressed as early on nothing feels stale or overused. It feels incredibly like the world of Halo but without any of the places we have been before.

A Strong Debut for “The Weapon”

As someone who typically enjoys the multiplayer offering, and playing the campaign with friends, the narrative is something I have never fully dived into. However, with Halo Infinite I found myself invested in the story almost as soon as I started playing. The inclusion of the Banished is wonderful, who were also incredibly great foes in Halo Wars 2. Not only in terms of fighting new enemies but also since it is a new faction in the mainline FPS Halo universe that we have not seen before. Although Cortana remains AFK, Chief finds guidance from another AI simply called “The Weapon”.

She was first teased in the Halo Infinite campaign footage, and she plays an important role in progressing Chief through the world. While many Halo fans of course adore Cortana, I found Chief’s new AI to be enjoyable. The Weapon provided subtle comedic jabs at Chief which he takes in stride. The banter helps to make Chief a more “human” character and makes Chief a more in-depth character. Instead of just a killing machine is something I found completely intriguing. I am invested to see how they continue to flesh out Chief as a character further into the game.

Using The Tools and Weapons At Your Disposal in Halo Infinite With every new Halo there comes a variety of new weapons and tools that Chief will have at his disposal. However, with Halo Infinite there never has there been more variety as well as impactful ways for you to take out your enemies. The first thing I immediately appreciated was the addition of ammo crates that were split into unique ammo types. For example, if you are running a standard Spartan Assault Rifle and Magnum combo, you will find “Kinetic” ammo crates to keep you stocked up on ammo. This made rolling through levels with my preferred load-out much easier than compared to previous Halo games. With this being said though, there are simply too many fun guns to use to stick to one loadout.

Although many fan favorites remain, such as the Needler and Energy sword, there are some incredible new weapons that will be at your disposal. I particularly fell in love with the Mangler, which is a slug-based shotgun that deals massive precision damage in close range. It is a rework of the Mauler from Halo 3. But it is a powerful weapon when paired with the mobility of the grappling hook. For enemies at a long distance, the new Stalker rifle is a Banished weapon that blends DMR-like capabilities with Sniper Rifle damage. It allowed me to take out enemies from a long distance away, which during some of the open-world outposts helped to make encounters easier. I cannot describe how exhilarating it was to thin out enemy lines with the Stalker rifle and then to grapple in with the Mangler and just lay waste to the enemies that remained.

While equipment like the bubble shield has long been an important part of Halo, the grappling hook is by far the best equipment ever created in a Halo game. This may sound like hyperbole, but the addition of the grappling hook, adds a whole new level of mobility to Master Chief. This is a major part of why Halo Infinite feels so much different than previous titles, the mobility lends itself to incredible moments that simply weren’t possible in previous titles. As a massive DOOM fan, I was quickly able to adapt my typical aggressive playstyle, which I have spent hours perfecting in DOOM. Quickly grappling onto enemies, while shotgunning them, and meleeing them to remove them quickly. On top of this, through “Spartan Cores” you can upgrade Chief’s abilities and one of the first I purchased was the stun upgrade for the grappling hook. When purchased, this upgrade essentially turns the grappling hook into a taser that holds your opponent in place with electricity allowing you to zip in and dispose of them quickly.

There is a particular section early on in the campaign, where after scuttling a Banished ship Chief has to escape as it begins to explode. From having to battle enemies, evade explosions, and grapple your way as the ship slowly self-destructs it feels like a truly cinematic moment in a sci-fi movie. But the best part is that you are in control throughout the entire duration of this moment it’s not just some CGI cinematic, it’s you controlling that moment. With so many games relying on CGI and QTE moments to deliver these types of moments, I have to tip my hat to 343 Industries for making such an incredible moment so early on in Halo Infinite. Many fans, myself included, were worried at the possibility of Halo expanding to an open world. This was caused by a mix of distrust caused by the Halo 5 campaign, which left many fans disappointed. The fear of the open-world direction is driven by the complete over-saturation of open-world checklist games that flooded the industry over the past few years. When Halo Infinite’s campaign opens up, it is surprisingly fantastic.

Although the map fills out with different side objectives that you can pursue, it still retains that Halo magic, but with a subtle difference. When you approach an outpost in Halo Infinite, you will find a variety of different enemies and objectives that you have to complete. During one outpost in particular I had to destroy a scrapyard facility that involved exploding massive reactors with heavy weapons.

If this had been another Halo game, I would have had to walk and gun down all the enemies and then destroy the objectives. Which on paper sounds incredibly lackluster. But the new flares that come with Halo Infinite allow players to approach each situation in a way that only you could do in a Halo sandbox. I approached from the side of the facility, and grappled onto the roof, and silently melee eliminated the jackal on the roof.

I proceeded to zipline to the opposite roof and silently eliminated the other jackal. This meant I wouldn’t have to deal with any more snipers in this confrontation. Then I waited for a large group of enemies to post up near an explosive crate. Of course, I quickly disposed of them by shooting the explosive create. Then, I sprinted into one of the garages to find a Scorpion conveniently parked inside. I simply commandeered the massive tank and made short work of both the remaining enemies as well as my objectives. This is just one of many examples of different experiences I had while exploring the world of Halo Infinite. The balance of tense and tight story-focused missions, with wide-open sandbox combat insanity, is brilliant.

Exploration and completing side objectives are very rewarding. Especially if you play on harder difficulties. Being able to upgrade your grapple hook, armor strength, and other stats through Spartan Cores, which can be found scattered throughout the world, will greatly help Legendary runs in the future.

There is also a wealth of audio logs players can hunt down that gives players a glance into the lore of Halo Infinite. As someone who has historically had very little interest in the lore, I found myself getting lost within the logs and wanting to learn more. While much of this is standard open-world activities, the mixture of lore, upgrades, and maneuverability really add more depth to your arsenal. However, I couldn’t resist completing outposts and hunting bounty targets.

An Impressive Showing for Halo Infinite As someone who was very nervous about the state of Halo Infinite’s campaign, I was absolutely blown away by this preview. If 343 can continue this blend of storytelling, fast-paced action, and classic Halo aesthetic throughout the entire campaign, then they truly have a hit on their hands. I had my doubts about 343’s ability to deliver on both a meaningful single-player campaign, while simultaneously delivering an engaging multiplayer.  Halo Infinite’s multiplayer is already in the hands of fans, who have been overjoyed with this new Halo experience. When the campaign launches on December 8th, I have feeling fans will also find the experience refreshing and exhilarating.