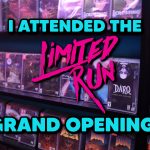 A couple of months ago, I reached out to Limited Run’s PR and asked if I could attend the Limited Run retail store’s grand opening. They said yes, so I packed a camera, a tripod, my Switch, and a change of clothes. After the three-hour drive, I arrived at what may be the coolest video game store I’ve ever been to. Let’s dive in!

The Limited Run store is packed to the gills with Limited Run games, merchandise, memorabilia, and the most incredible pre-owned game library I’ve ever seen in one place. Around every corner is something that triggered nostalgia. Whether I was picking up a complete, in-box copy of Ratchet & Clank: Up Your Arsenal for $16.99 or holding a physical copy of one of my favorite digital games; I reminisced on video games the entire time. Also, the Jason Graves produced soundtrack playing in the store helps to conjure up those video game nostalgia feels.

That’s what I think makes this store special. Even when the hundreds of people were waiting outside in the massive line that snaked around the shopping center; everyone was smiling. They were talking about their favorite games, making friends, and sharing memories. This store stands as a beacon for gamers to share and bask in their love of gaming. In an age where everything is going digital, we’re losing the tangible sense of community gaming used to have. The Limited Run store brings gamers together and I think that’s super cool. 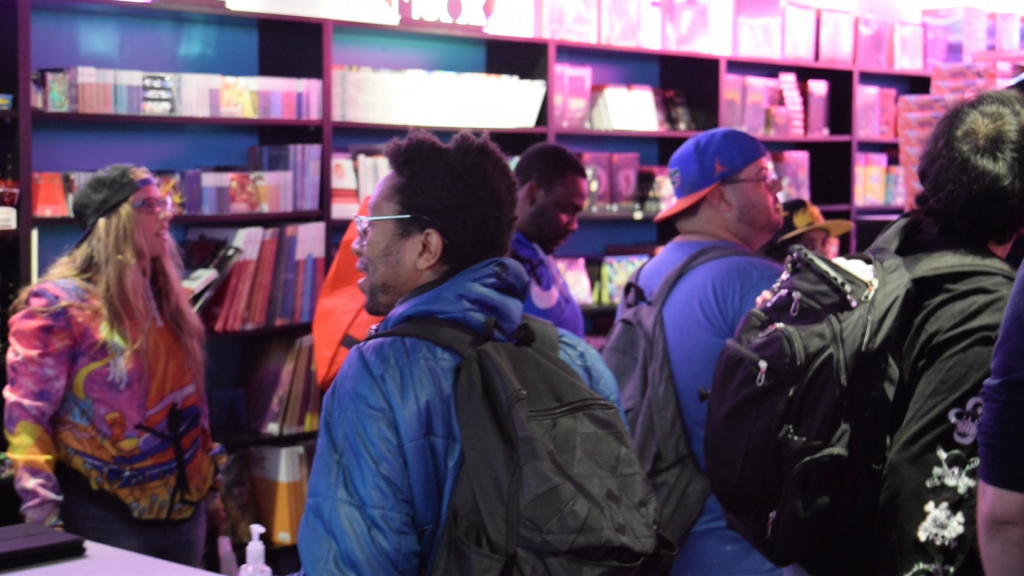 I had the chance to interview Douglas Bogart, COO/Co-Founder of Limited Run, which unfortunately got cut short in the midst of the final answer due to a camera issue. But we still had a great chat!

Ben: Just looking around, I see so many Vita games, games I haven’t thought of in a really long time, and so many different Limited Run games. Limited almost feels like just a branding thing at this point.

Douglas: Oh, yeah… Any time we’ve done a Limited Run event in the past, we always reserve copies for replacements, as well as damages. Over time we’ve accumulated a lot of stock that we’ve never been able to sell. Not to mention all the new stuff and other stuff we have. My co-founder has always been a game collector. He just purchasing stuff to watch the values go up. It’s kind of a fun thing for him.

So as a company, we bought a lot of his collection and we’re selling it to people. Like I said, we hold onto a lot of our own games and when we switched to open pre-order, it was easier to hold on to a certain percentage for the store. We kind of had an idea in our head that [the store] would be a thing some day. But this only really came together once the pandemic started.

Ben: When I heard you were opening a retail location, I thought, “Of course they are.” Because that feels like a natural extension of the mindset that would lead you to release physical copies of digital games. So I want to kick it to you by asking, what does opening this store mean to you?

Douglas: It means a lot. Like you said, we do physical games and I think the retail experience is definitely something a lot of my generation and older miss. We don’t really have a lot of retail game stores in a lot of areas anymore. I know that when we visit San Francisco for example, we have to travel outside of the city to go to a game store… Growing up around this area, the Raleigh and Cary [North Carolina] area, the only stores we had back in the day were Play N Trade… we just don’t have a whole lot. The best game store [in North Carolina] is in Greensboro, which is about an hour and a half away, called Lost Ark. So we thought, why don’t we kind of bring that back.

Ever since we started the company, Josh (Co-Founder) always told me, “If Limited Run ever goes out of business, I think the next thing I’ll do is open a game store.” We were all sitting around thinking, right before the pandemic, why don’t we just do that while we can? And do it well. Because obviously, if the company goes out of business, whatever game store you’re imagining is not going to be this. This looks amazing.

It also gives us a chance to hold events like this and really show customer appreciation. It also lets us invite guests. We have a room that will eventually be good for panels… and more stuff like this. Really bring back that feeling that we all had when we were younger. Like, buying a game in a store that’s themed around games. 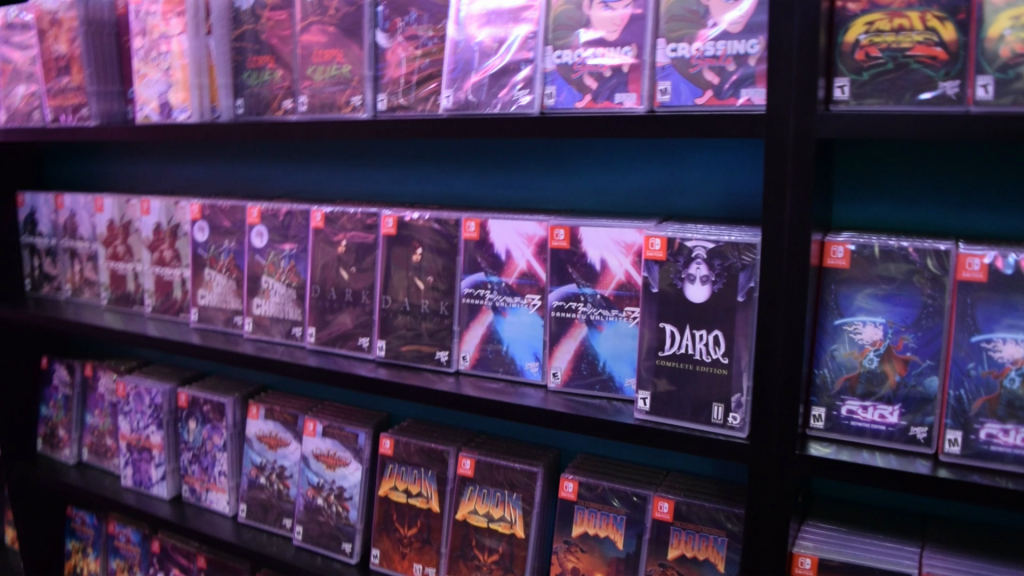 Ben: Limited Run has worked with developers large and small, and I imagine each comes with its own set of challenges. When you get in contact with a studio like LucasArts, how do those conversations differ from the smaller studios?

Douglas: With the larger companies, it’s definitely a matter of trust. A lot of references to the people we have worked with in the past. There’s a lot more forecasting that goes into those. We basically have to create a fake sale. Almost to show them an example of what we think the potential could be. We also have to be very careful with the IP. Show them that anything we do, we’re going to be very careful in the approval process.

We’re obviously going to show a lot of care, in terms of being fans of the IP. There’s a lot more paperwork and a lot more approvals. It’s a lot slower of a process overall, but you are dealing with a larger company. So it just kind of comes with the territory. Overall the actual process is very similar to what we do with indies, it’s just extended because of all the approvals.

Ben: Out of all the games Limited Run has made physical, either for the first time or once again, what’s the one game that made you think, “I can’t believe we did this!”?

Douglas: This is tricky… it’s like picking your favorite kid. I feel like the biggest deal for me, and probably my Co-Founder as well is dealing with the Star Wars IP is a huge thing for us. I’ve known Josh (Co-Founder) since we were in the sixth grade in 2000. I remember when Revenge of the Sith was coming out, we would act out Star Wars scenes in Toys R US. We’ve been huge Star Wars fans since we’ve known each other, and before. So the fact that we were able to do anything with that license is a huge deal to us. It’s just kind of mind-blowing to think that we came from doing our own small indie games to now we’re doing Star Wars stuff.

The Physical Future is Limited Run

Ben: With the growing popularity of subscription services and cloud gaming, when you look at the resurgence in the vinyl record market, does that inspire hope that people will still desire physical media in the future?

Douglas: Yeah. I would say inspired is definitely past tense for us because clearly, we’ve shown there is a model for this. There are like twenty other companies doing something similar to us now. There’s definitely demand. Vinyl was a very good example of the writing on the wall. That we knew this was probably going to be a thing. When we launched this, digital was already starting to become kind of the forefront. A lot of publishers and developers were scared to do retail because the massive cuts they were having to make in the game and they just weren’t making money anymore. It wasn’t worth it to developers. At that point, it was just cheaper to do digital.

So once we examined the vinyl market, we saw that movie collecting was still a huge deal… There’s definitely going to be a lane for games because we want them. There’s gotta be people like us and we were right. There were tons of people. It’s only grown from here and our customer base keeps expanding. There are more companies doing what we do. It’s proven to be very similar to vinyl. I think physical games will be around for a really long time but it will always be an uphill battle… I don’t think digital will be something that will happen soon rather than later.

Unfortunately, in America, the infrastructure for our internet is just not all there. We just got Google Fiber in the area I live in, which I have and it’s amazing. But a lot of places and a lot of customers we talk to, still have tiered internet. They have data caps and horrible speeds. It’s just not feasible yet… I think physical is going to be around for a long time. I think people like Nintendo, will probably continue to do physical as long as they can. That’s kind of their bread and butter. 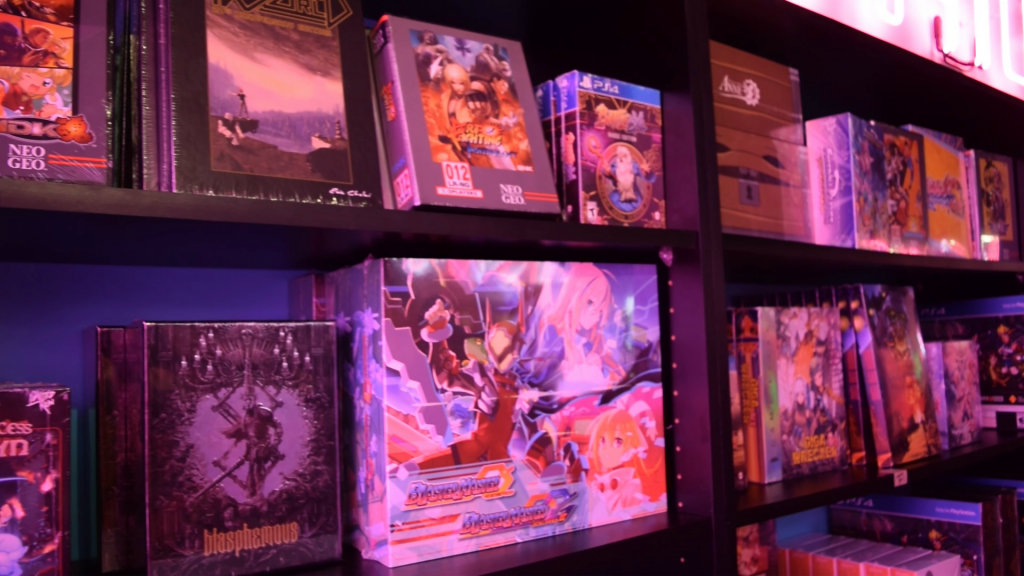 Ben: I think it’s incredibly cool that Limited Run makes physical versions of games for retro consoles in 2022. Is there a console that you would love to make physical games for that you haven’t had a chance to yet?

Douglas: Yeah, I mean there’s a lot… We’ve always talked about it would be cool to bring back some Dreamcast stuff. But we’d only ever do it if it was officially licensed by Sega. During the pandemic, I was trying to find weird things to collect to keep myself sane. Game Gear is one that I started to collect but nobody kept the boxes for those. If they did, they’re in terrible condition. It would be cool to be able to redo stuff like that, so people can collect a full set again. Then you know, like NeoGeo and NeoGeo pocket. Those are things that would be cool because they are so expensive.

Unfortunately, that’s when my camera turned off and I lost the last three minutes of our conversation.

If you would like to take a check out some footage from the grand opening or my conversation with Douglas Bogart, check out the video linked below. Will you travel to Cary, NC to check out the Limited Run store? Let us know in the comments below!