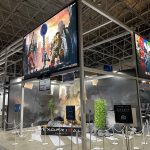 You are reading
Tokyo Game Show 2022: All the Major Headlines

The 2022 Tokyo Game Show was held this week at the convention center in Chiba. This year’s event was a return to form following the 2019 COVID-19 Pandemic. All of the major Japanese publishers came to show what they have been working on. The likes of which include, Capcom, Sega, Square Enix, Koei Tecmo, and even the return of Konami. With that, we have collected the biggest headlines coming from the 2022 Tokyo Game Show.

Wo Long: Fallen Dynasty Gets A Demo

Bring a little slice of TGS home, Team Ninja’s new action game gets a timed demo. PlayStation and Xbox players have until September 25th to play an early release prior to the game’s launch in 2023. Make sure you take some time to play the game this week, as it is fantastic.

During the Capcom presentation, there was a lengthy trailer and discussion regarding the third-person shooter Exoprimal. Also, you can sign up for the closed beta test via the link here.

During the Xbox event, it was announced that the tactical role-playing game from CyberConnect FUGA would be launching on Xbox Game Pass that day. The cat tactics game currently resides on Steam with a 9/10 user score, as well as an 82 on OpenCritic. Additionally, a FUGA2 is in development and will launch on PC, PlayStation, Nintendo, and Xbox in 2023.

Along with press previews, those lucky enough to arrive at TGS early were able to get a hands-on demo of Resident Evil Village running on PS VR2. This is the first time the new platform was seen by the public. There is no better way to begin the new generation than with the amazing horror franchise.

During their TGS event, Capcom showed lengthy gameplay of The Shadow of Rose. An all-new epilogue to Resident Evil Village where you play as Ethan Winters’s daughter Rose. Along with that, Capcom showed the new third-person perspective added to the game as well as new mercenary content.

Capcom has confirmed that Street Fighter 6 will launch with 18 fighters in 2023. Additionally, a closed beta test will be held from October 7th through the 10th. You can sign up to be a part of the closed beta here.

During its own event, Konami announced that it would be remastering two Suikoden titles. While no exact date was given, the single game will launch on PC, PlayStation, Xbox, and Nintendo Switch in 2023. It will release as a collection titled, Suikoden I&II HD Remaster Gate Rune and Dunan Unification Wars.

Valkyrie Elysium Gets A Demo

Among the barrage of titles Square Enix has in store over the next year is Valkyrie Elysium. If you are not sure if this is for you, or you lost track of all the new games from Square, fear not a demo has been released on the PlayStation Store. Those looking to purchase the game can get a head start as save progress will be transferable to the main title.

Originally announced during the Nintendo Direct, the remake of Final Fantasy VII’s prequel Crisis Core will launch this year. Crisis Core: Final Fantasy VII Reunion will launch on Xbox, PC, PlayStation, and Nintendo Switch on December 13th. With that Square Enix released a ton of new gameplay footage. Thanks to Famitsu close to 30 minutes of gameplay has been uploaded.

Sega has been no stranger to the Tokyo Game Show, making its return on its home turf, Sega showed off Super Sonic from Sonic Frontiers. Frontiers had a huge space on the show floor, and a ton of new gameplay footage has come out from the event.

Star Ocean The Divine Force launches on PlayStation, PC, and Xbox, on October 27th. Starting on September 20th a roughly two-hour demo will be posted on all platforms giving players the opportunity to see what Star Ocean is all about. Along with the demo, Square Enix released a launch trailer in preparation for the game’s launch this fall.

Yakuza fans left Tokyo Game Show 2022 satisfied before the event even began. Three Yakuza games will be coming over the next two years. Among the new games includes a Remake of 2014’s Ishin. A Restoration era spin-off with reused gameplay, characters, and combat from PS3 to PS4 era Yakuza games. Along with that, developer Ryu ga Gotoku announced Like A Dragon 8 will be coming out in 2024, a full RPG sequel to Yakuza: Like A Dragon. Finally tying everything together will be Like a Dragon Gaiden: The Man Who Erased His Name. Gaiden will take place between Yakuza 6 and Yakuza 8, giving long-time fans insight into what Kazuma Kiryu has been up to. With that RGG plans to release Gaiden in 2023, leading up to the release of Like A Dragon 8.