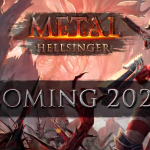 Doom is not the only game in the demon-slaying town. Stylish first-person shooter Metal Hellsinger is coming from the developer, The Outsiders. The trailer showcased fast-paced duel wielding gunplay that was ripped straight from the id Software playbook.

While the game seems fairly straightforward in terms of what it’s offering gameplaywise, the real hook comes from the first part of its name ‘Metal’. The game features an all-star cast of performers from metal bands including Trivium, Dark Tranquillity, Soilwork, Arch Enemy, and more. Even more so than a banging soundtrack, the game will feature rhythm combat, with dynamic track changes. In an interview, further details on the story were revealed. The game puts you in the shoes of a half-demon protagonist, The Unknown, who must fight their way through Hell.

Check out the full announcement trailer for Metal Hellsinger below. Stay tuned for more from IGN’s Expo and keep track of all the events from the Summer of E3 with our handy tracker.