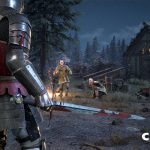 Chivalry II, the first-person medieval brawler, was officially announced during IGN’s Expo showcase and will be coming to PS5 and Xbox Series X. This is alongside some other fantastic tiles such as Werewolf: The Apocalypse.

Whether you decide to play Chivalry II on console or PC, the first-person multiplayer game will be crossplay across all of the platforms it’s launching on. That list includes not only Playstation 5 and Xbox Series X, but also PS4, Xbox One, and PC. Check out the latest trailer featuring some gore-filled gameplay:

Head to the game’s official website for more information.