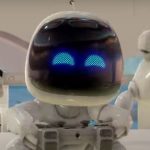 You are reading
PS5 Reveal Event: Astro’s Playroom Will Be Pre-loaded on PS5

Astro’s Playroom is the newest offering for the PlayStation 5 from developer Japan Studios. The adorable platformer will be a combination of two previous efforts on the PS4, Astro Bot Rescue Mission and Playroom. More importantly, it was confirmed by Shuhei Yoshida that the game will come preloaded on every PS5.

“Feel The World” with Astro’s Playroom x DualSense! And, it is pre-loaded with your #PS5!https://t.co/sFFHlIhBBg

The adorable game will see the return of Astro Bot, the titular character from Astro Bot Rescue Mission, which launched for PlayStation VR in 2018. But, there is currently no information about whether or not the game will make an appearance on a VR device. However, it will showcase creative use of the new DualSense controller in much the way a Wii Sports type game did for the Wii Remote. Astro Bot will enter into The Playroom, which was a series of mini-games in augmented reality. In addition, you can see the full trailer below.