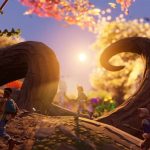 You are reading
Grounded Has Already Passed 1 Million Players

Grounded started as a small passion project amongst a small group within Obsidian. With a team of 13 developers working in a short time of 2 years. Grounded officially went live on Xbox and Steam early access. Now in only 48 hours, the game already has over 1 million players.

Today in an official post on the Xbox Wire, we learned that Grounded is a much bigger success than expected. The game has been the number one best selling game on Steam since its release. This plus the inclusion of Grounded in Xbox and PC Game Pass has contributed hugely to the game’s success. While thanking players for giving Grounded a chance, the game’s director Adam Brennecke had this to say on the future of the game.

“With so many of you interested in our game, we can’t wait to bring you more to do in Grounded every month. As we look forward to building Grounded together, we want to let you know that this journey is just the start of the adventure and we will be making continued updates and fixes to ensure the best player experience possible. Also, starting on August 27, we will begin our monthly delivery of game updates.”