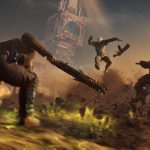 You are reading
People Can Fly Announce A New AAA Project

If you are not familiar with People Can Fly, they are a development studio that was founded in Poland back in 2002. They have worked on a wide variety of titles. From the Xbox 360 game Gears of War: Judgement as well as comedy shooter Bulletstorm. Their newest game Outriders was announced at E3 2019 during Square Enix’s press event. The game is set to come to Xbox One, PlayStation 4, PC, and next-generation consoles. Now we learned today that the studio continues to grow and expand its projects.

In a blog post today we learned that People Can Fly will be designing a new AAA IP. This new IP will be coming to next-generation platforms, PC and streaming platforms. The game will be headed by the New York branch of People Can Fly. The studio plans to hire dozens of developers across all roles in order to expand its New York team. Sebastian Wojciechowski who is the CEO of People Can Fly had this to say in regards to the studio’s growth.

“Last year we announced the opening of our New York studio and revealed Outriders for the first time. Today we have surpassed 250 staff and are excited to announce the next chapter in the development of our company. Our intention from the beginning has been to expand People Can Fly into a multi-project studio and continue to build a global presence for our brand. With the launch of the next-generation consoles later this year, we are incredibly excited about the future of People Can Fly and the games industry as a whole.”

It is exciting to see more and more studios grow and develop as we head into the next generation. We cannot wait to hear more about the People Can Fly’s new project, and wish them all the best.