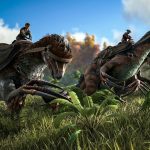 One of the biggest criticisms of the Epic Games Store is how it lacks core features that Steam has. While Epic has been finding other ways of bringing people to the storefront. From amazing deals that have seen games like GTA V available for free. This has driven the registered user traffic up to a whopping 61 million users in one month. However, with success, comes more pressure to continue to improve. It appears Epic wants to address one of the biggest complaints people have with the storefront.

Earlier today on Twitter, the official Epic Games Store account shared that they are slowly going to be rolling out an achievement system. In a brief video, they showed the system in action with Ark: Survival Evolved. The UI and integration look very clean, it remains to be seen how well the system will work for users. This feature is still in the early phases of development, which means users should expect bugs and glitches. As with any new feature, it is important to leave feedback and issues with the Epic Games Store support feature. The company is teasing more information and changes will be coming in the upcoming months. We will most likely hear more about the achievement system as it rolls out to more and more games.

Certain games on the Epic Games Store may begin to display achievements as you unlock them.

This is an early version of the feature and you can expect to see changes & adjustments.

We'll have more info to share on achievements in the future, so stay tuned! pic.twitter.com/80dnoLYegV

Are you excited about achievements being added to the Epic Games Store? Let us know in the comments and don’t forget to check back for the latest gaming news and information.