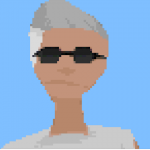 You are reading
Rizzo Island: A Game That Inspires

When you think about QuakeCon, it is unlikely that indies will be part of that thought process. Let me be the first to say that this is far from the case. Sure, the floor isn’t jampacked with indie games and developers, but the few that were present sure had some goodies.

This was the first developer I had the pleasure to stop by and chat with. What caught my attention was the use of what looked like old PC hardware and a Sega Dreamcast. No, the booth wasn’t trying to share off an arsenal of retro Dreamcast games, but rather a completely new game being developed and playable on a Dreamcast. I had to know the story.

The story is truly humbling, project head & game designer David Croshaw shared the story of how the game was inspired after the passing of his uncle, Tom Rizzo. Uncle Rizzo was a musician that clearly left a lot of joy and passion behind in his songs. This inspired Croshaw to not only pursue a chance at developing a game on one of his favorite systems but also to help spread the music of his late Uncle Rizzo. The passion was felt when David was explaining the premise of the game.  A surfer named Tom was seeking out a nice relaxation spot when suddenly he finds himself fallen from his “Psychedelevator.” The game seemed like the old school 3D platformer that included all of the whacky enemies and obstacles you would expect. Think “very 90s!”

From the demo, the game had a very old school style-vibe which fit perfectly with the direction of the game. One of the aspirations that David said he wanted from Rizzo Island, was to ensure it was one of the most optimized games to be released on the Dreamcast. That being said, the game operates as a fully functional game, but when you put the game onto a disc, it will act as a double for music as well. Due to the game beginning development from a version of the Quake Engine, it is only fitting that Rizzo Island found itself in the lineup at QuakeCon 2019. The game is currently being developed by a very small team at Dreameater Games and has a bit to go, but the sky is the limit. After all, who else is developing Dreamcast games in 2019? Only the awesome ones.

If you would like to support an up-and-coming, aspiring developer, check out the Rizzo Island Patreon!