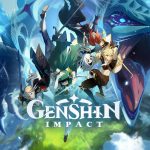 You are reading
Free-to-play Genshin Impact Launches Sept. 28 For PS4

Developer miHoYo announced today its anticipated free-to-play RPG Genshin Impact will be available on PS4 Sept. 28, 2020. The news comes shortly after the announcement of the game’s PC and Mobile launch date, which is scheduled for Sept. 28 as well. PS4 players are also getting exclusive content and a bundle to compliment the launch. The exclusive content includes the stylish Sword of Descension weapon and Wings of Descension wind glider. 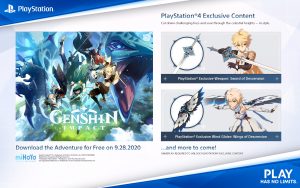 While Genshin Impact is free-to-play, PS4 users have the option to pre-order an Adventure’s Bundle. The content of that bundle can be seen in the photo below: 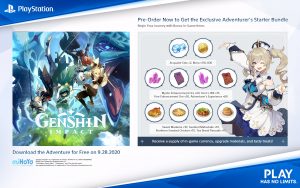 At launch, players can explore two of the seven major cities – Mondstadt and Liyue Harbor – filled with diverse stories, enemies and treasures. As a free-to-play online title, the game will continue to expand on launch content with more cities, stories, characters and seasonal events. The upcoming free-to-play game will also include cross-platform co-op mode up to four players.

The pre-release campaign also extends to social media, where 150,000 subscribers on the game’s YouTube page can earn players 2 Acquaint Fates. You can read more about that here.

The last time we covered developer miHoYo’s Genshin Impact, we said the anime open-world JRPG was something worth getting excited for. After some hands-on time with its PS4 version, it’s clear what the game’s strengths are – gameplay, exploration, and narrative. While the mobile version we tested ran better than expected, the PS4 version requires more polish.

Stay tuned to LordsofGaming.net for more information on the game.