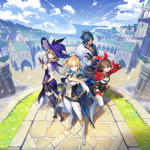 After playing through a few hours of the final closed beta for Genshin Impact, here are our thoughts on the game before its tentative late-2020 release.

The last time we covered developer miHoYo’s Genshin Impact, we said the anime open-world JRPG was something “worth getting excited for.” After some hands-on time with its PS4 version, it’s clear what the game’s strengths are – gameplay, exploration, and narrative. Genshin Impact is, in essence, an open-world action RPG infused with a mobile gacha system. You’ll take on and complete various quests and level up unlocked characters in element-based action combat (lighting, fire, water, etc). The more mainline and side quests you complete, the more currency you’ll earn for weapons and playable characters.

A Recap On Our Previous Impressions

Each character specializes in one element, which allows for different approaches to fighting gameplay. For instance, using one person’s fire attack then another’s wind attack can create a fire-wind storm for extra damage. Even if multiple characters in your party use the same element, each could play differently based on their weapon – a bow, great sword, a magic tome, etc. I just hope story progression won’t be halted due to not having a specific character unlocked through the gacha mechanics.

After being separated from their sibling, the silent protagonist awakens alongside their feisty and hilarious companion Paimon in the fantasy world of Teyvat. Both set out to find clues in this distant land that can lead them to the lost sibling. The player eventually comes across Amber, an archer and member of the Knights of Favonius, who acts as your introduction to the world and cast. Detailed in my last preview, the game has strong footing with well-written quests and narrative beats. Who would have thought a tutorial on how to glide in the game could lead into something much cooler, which was an investigation into a skilled glider/thief? It’s these surprises that kept me invested in the story direction and accepting any quests I could find.

Anyone who has played The Legend of Zelda: Breath of the Wild will feel a familiarity when venturing in Genshin Impact. The game has its in-game markers for story quests and whatnot, but those are just nudges. What it really wants you to do is go off the beaten path to find enemy camp sites, treasures and secrets alike. For more information on gameplay systems and exploration, check out our impressions here.

Thoughts on the Final Closed Beta

My overall thoughts on Genshin Impact so far hasn’t changed , but it’s clear what it really needs – polish. The game itself has the potential to be fantastic, but for a final beta, the PS4 version is technically a mess. To better convey what I’m saying, I’ll be referring to the gameplay video below we captured on a PS4 Pro. The video highlights the general gameplay as well as some story content.

Onto the technical issues I’ve experienced during my time in the final closed beta. In and outside of combat, framerate drops were numerous and made this action-oriented game feel sluggish too often. Additionally, pay attention to character dialogue starting at 15:02 in the video – a lot of the English voices don’t match up with their character’s mouth movements. This may be a bug however, this is the first time I’ve seen this glaring problem.

While I do enjoy the user interface, it needs more refinement. Slow loading did occur multiple times as well. In one particular situation (21:04 – 21:18), I thought my console had crashed. Turns out, it was just the character menu screen taking 10+ seconds to load. It was frustrating to debate whether opening up the menu was worth it while playing. Making the menu snappy and seamless would have made the experience a lot better. The developers should take the time to tighten up the game for a more smooth experience overall. On PS4 Pro, loading times were long, framerate dipped often, and the menu shuffling could be more responsive. Not to mention, screen tearing. Lots and lots of screen tearing (13:04 – 13:20).

Oddly enough, my time playing Genshin Impact on mobile was better than on PS4 Pro. Perhaps it speaks to miHoYo’s past developing mobile games, but for a system with more powerful hardware, I expected better. Genshin Impact has some true quality in its game design, gorgeous art style, and rich narrative. But if miHoYo truly wants PlayStation players to continue their adventure in Teyvat, it needs to be technically efficient.