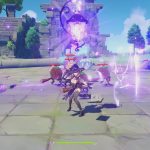 With anime-like JRPGs waning in recent times, developer miHoYo’s Genshin Impact stood out to me. I met up with a representative of the dev team during PAX East 2020 to get a better picture of this open-world action RPG title. What was it setting out to do? How was it different? What can players expect? We covered these questions in our PAX East preview, but I wanted to know more. After playing close to 15 hours of Genshin Impact‘s closed beta, I now have a greater understanding of the game and it’s worth getting excited for.

Basics of the Beta

As we mentioned in previous coverage, Genshin Impact is an action open-world game set in the lands of Teyvat. After being separated from your sibling, you awake alongside your feisty and hilarious companion Paimon in Teyvat. Both set out to find the clues in this distant land that can lead you to your sibling. The player eventually comes across Amber, an archer and member of the Knights of Favonius, who will introduce you to the world and its mysteries. As an editor’s note, the version of the game I tested was on mobile, but the developers are releasing the game on PS4 and PC as well.

The closed beta allowed players to really get into the meat and bones of gameplay, exploration and story. Genshin Impact blends a Platinum Games’ action-style combat with a layered elemental system. These elements are tied to a specific and unique special attack for each character. For instance, Amber’s element is fire, so she’s able to draw back an arrow and imbue it with fire. Her unique attack is releasing a cute character that explodes when attacked. Her special attack is a volley of fire arrows onto enemies.

Players can have up to four members in a party with the best idea to have each with different elements. I eventually unlocked Jean, a wind-based sword fighter, who was able to use Amber’s leftover fire for a devastating fire-wind combo. Only one character can take up the screen at once, so switching between their attacks was a simple touch press.

Another setup I considered while playing was wanting my character to be protected from long-ranged attacks. Thankfully, a character I recently unlocked was able to make this happen. By casting Ningguang’s large wall spell, I switched to Amber to fire off arrows without worry about getting hit from afar. It’s the combat possibilities like ones I mentioned that make battles fun and diverse. With a game as large as this one, it’s easy for the combat to lose focus and be haphazard. I’m happy to report the battle and elemental systems are as strong as the other pillars of this game.

I played the beta on my Galaxy S9+ and it ran better than I anticipated. There were the occasional pop-ins, low res textures and slowed down framerate, but not as common as you would think. Only bumping up the resolution is when these tech issues became more apparent, naturally.

The controls themselves were a little troublesome, but not enough to ruin my experience. There were just some instances where I meant to use a special attack in one direction and the character did the attack in the opposite direction. This lead to me stop attacking, readjust my camera, then use the special move, which really disrupts the flow of combat. Even if the character was facing the enemy, it all unfortunately mattered on which direction your camera was facing.

See More: Doom Eternal Rips And Tears Into My Heart

A Full, Beautiful World To Venture

If an intricate and flashy combat system wasn’t enough, Genshin Impact has its roots deep in exploration. The game has its in-game markers for story quests and whatnot, but those are just nudges. What it really wants you to do is go off the beaten path. When I did, I was rewarded, so I just kept going and going until I couldn’t. With wonderful music underscoring your trek, it was addicting to reach the peak of a mountain top and look in the distance of this gorgeously-made world. Its style is more similar to Breath of the Wild than Witcher 3, but it’s distinctive in the open-world genre.

A part of what makes the open-world so great is its strong writing for NPCs. miHoYo gives more personality to NPCs than most, making my experience all the more engaging. The same can be said for the game’s quests as well, an aspect of Genshin Impact I was very hesitant on initially. I’ve played one too many JRPGs where the dialogue can be cringe-worthy and boring, but Genshin Impact isn’t that. In fact, it’s the complete opposite. It’s actually very, very good. What I thought was going to be a run-of-the-mill basic quest of learning how to glide lead into something much cooler, which was an investigation mission into a skilled glider/thief.

It was a great sigh of relief seeing the quests be so layered, interesting and fun along with great writing. I hope this quality in storytelling and quest design carries over through the campaign. I came out of my time playing really impressed with the game’s story so far and enjoy being in the company with its main characters.

The game directs the player into a number of dungeons that ended up being slightly disappointing. However, the ones I played were introductory levels that focused more on puzzles. Each character’s element can be utilized to navigate the dungeon and reach its end. Sadly, only fighting basic enemies throughout feels underwhelming for such a layered combat system. I expected a boss or mini-boss to appear, but the levels end pretty plainly and I expected more out of them.

Back to exploration, the map is littered with treasure chests that are mostly unlocked by beating a group of monsters. Some were accessed by completing small puzzles, which was a nice change of pace. Nearly all of the treasures chests I came across had necessary materials to level up my party along with a basic weapon or two.

Unfortunately, most of the better weapons in the beta were obtainable via the game’s gacha shop. Genshin Impact is a free-to-play title, but it wasn’t clear how microtransactions would be structured. I learned that it operates like most mobile RPGs, where daily and in-game currency can be spent on a banner pool. For Genshin Impact, those prizes were playable characters and weapons, which is a blemish on meaningful progression.

See More: Bravely Default II’s Demo Is Great, But Has A Few Issues

Final Thoughts On The Beta

It’s clear miHoYo has talent. They made an engrossing open-world with an interesting narrative to follow and great writing. The combat system and gameplay could use some polish, but it’s nearly there from being pristine. Leveling up new characters isn’t a chore either since it is based on materials you earn by exploring, which you’ll do 80% of the time. I just can’t help but think, what if this ambitious singleplayer experience didn’t include the microtransactions? What if the playable characters were added to your party by playing through the story rather than randomly earned?

miHoYo would then have a hell of an RPG on their resume. Despite that, the developer did say they plan on releasing new characters and updates post-launch. With the world they created, and if quests continue to have the same quality as they did in the beta, then I’m okay with the current model. By the looks of it, Genshin Impact still wants to serve players an interesting story, a beautiful world to explore, and fun content, all of which I came across in the beta.

Genshin Impact will release in 2020 on PS4, PC, Switch and mobile.