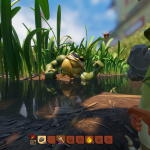 Grounded has been a surprising success for Obsidian. What was often referred to as a small team’s passion project has quickly taken the survival genre by storm. The game was a runaway success when it launched into early access on Xbox and Steam. What does the future hold for Grounded? We will be finding out very soon, thanks to the most recent update from Obsidian.

In a community update post, Shyla Schofield the social media manager for Obsidian had a lot to share about the game. Some key takeaways from this post were that the first content update will be available on August 27th. This will bring a host of new content to the game. This marks the first content drop for the game, as up till now the game has had a host of quality of life patches.

Along with this content update, fans will get to see a look at what the future of Grounded will be shaping up to be. A promised roadmap of content that will be coming to the game is also coming on August 27th. This information will be revealed via an official live stream. It is also worth noting there will be another developer blog being released alongside all of this other information. If you are a fan of Grounded you will not want to forget the date of August 27th.

Have you been playing Grounded? Let us know in the comments and don’t forget to check back for the latest gaming news and information. You can also check out our collection of guides here.