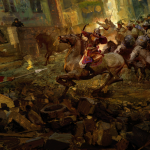 Crusader Kings III is the newest addition in the Crusader Kings family of games. A series of real-time strategy games that focus on roleplaying and character dynasty. While Crusader Kings II was an excellent game with many varied and interesting expansions under its belt, can the third installment live up to the franchise?

At its core, the premise of Crusader Kings III isn’t much different from that of its predecessors. You still play as a ruler in Europe. You can still start wars, conduct diplomacy, and participate in text-based events whose decisions affect you and your family’s future. There is no true end goal to the game; you have to make your own.

However, that isn’t to say that there haven’t been improvements. While the previous game in the series felt difficult to enter as a new player, Crusader Kings III is much the opposite. The tutorial, wealth of tips, and encyclopedia all go a long way towards making it an accessible title. New players can now jump in and have fun while knowing all of the basics within an hour or so.

While it is still a difficult game to master, that doesn’t impact its fun factor.

Before you start a game in Crusader Kings III, you are able to change a myriad of options to play in the world you want to play in. You can change things from the year you want to start in, to the state of the world itself. Depending on the choices that you make, the game can be easier or harder in difficulty. This is why certain options disable your ability to gain achievements in that game. 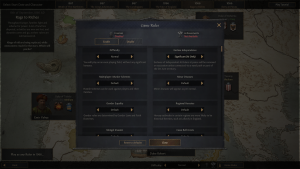 While some of the options make sense such as the actual difficulty setting, others not so much. For example, starting with gender or marriage equality in your game immediately disqualifies you from earning achievements. It’s unclear why they would make such a decision – you can achieve both of these settings in-game no matter what you start with.

Despite the strange state of achievements, the many options available for game customization are fun to play with. They truly let you have any kind of game you would want.

Compared to its predecessor, Crusader Kings III offers an improved wealth of roleplaying opportunities. For one, players have additional customization options. While there is currently no ability to design your own ruler (this was a DLC in the second installment), you can change the hair, accessories, and outfit of your character from the base game. And it comes with a wealth of outfits to try on. There are also additional personality and sexuality traits.

See More: Rainbow Six Siege Is Getting A 4k/120FPS Next Generation Upgrade

The immersion doesn’t stop at playing dress-up. Every character in Crusader Kings has a handful of traits that define who they are as a character. While players are free to make choices against their characters’ personalities, this comes at a cost: stress. Going against the nature of your characters accrues stress levels. The higher your stress, the worse the impact. If you get to the max level, your character can face some dire consequences – like insanity or death.

There is another new metric associated with your character that you need to keep track of besides stress: dread. Dread acts as a measure of how much fear other characters feel towards yours. It makes playing as a tyrant a more viable option than in the previous game. In the second Crusader Kings, becoming a tyrant would usually get you killed quickly. Either by assassination or enemy countries uniting against you. In the third installment, your dread score can be high enough that it keeps most people in check. They get statuses such as “Intimidated” that make them less likely to act against you.

All-in-all, the new features add more depth to the characters in the game.

There are many changes from Crusader Kings II to Crusader Kings III, and this article only touches on the surface of them. But from what was apparent at first glance, the new features add more meat and story to an already enjoyable game.