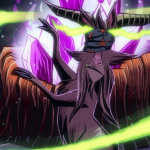 You are reading
Review: The Seasonal Worlds of Drake Hollow

The quirky game, Drake Hollow, developed by The Molasses Flood fills in a genre gap that has been touched only by a few others. Somewhere between the elements of survival and tower defense with an added story is Drake Hollow. The game uses the charm of its cartoon-style graphics and simplicity to be unique. In a world of similarly-styled games, the game will draw similarities to Fortnite’s Save the World game mode. As of the writing of this review, only the campaign has been unlocked, with a sand-box style mode to be enabled in the future.

Drake Hollow has a lot of likenesses to other titles in the genre, though it brings plenty of the unexpected as well. While on the surface, the game is very reminiscent of Fortnite’s Save the World mode, I often found myself often seeing some similarities to Sunset Overdrive. These I feel are very fair comparisons; however, Drake Hollow does enough to set itself apart from these games.

One concept that Drake Hollow introduces is, well, the Drakes. The Drakes are essentially plant creatures that have magical abilities. In the story, the Drakes seemed like happy beings until the Hollow began to spread and weaken them. How you use the Drakes is very akin to the Materia system of Final Fantasy VII. As you traverse the lands, you will encounter different kinds of Drakes to send back to your camp. That is the easy part.

Now, once you have found some Drakes, they become your responsibility to take care of. You essentially become a parent to these incredibly adorable plant creatures. At your camp, you must maintain food, water, and provide entertainment to care for them. Yes, you must entertain them as well since Drakes literally can become bored to death! While this provides more depth to the game, at times it can feel unnecessarily tedious. I found myself constantly having to rush back to the camp to adjust to the needs of the Drakes. Sometimes even adding more of what they are requesting does nothing to change the direction of their needs. 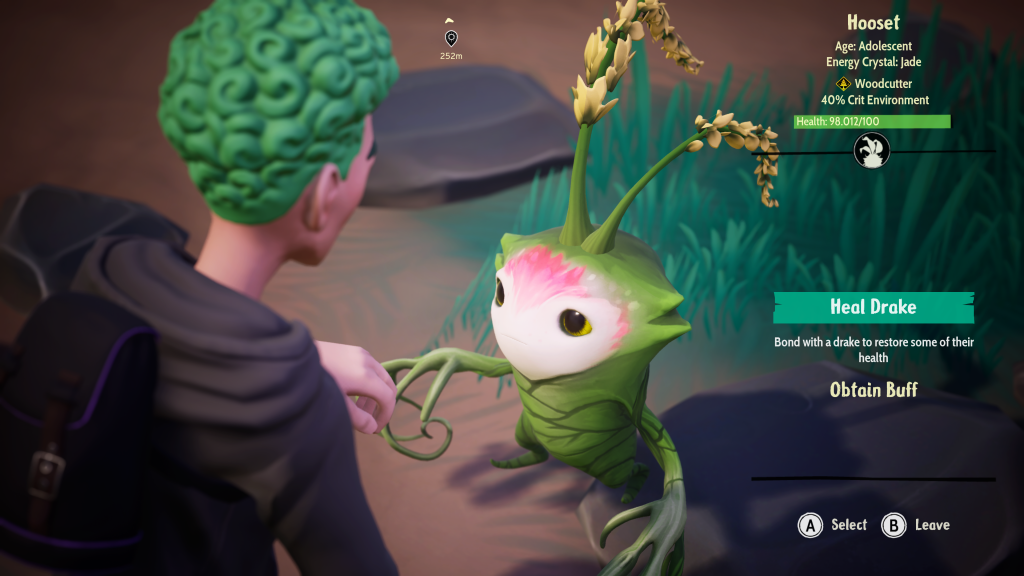 The way that Drake Hollow handles the magical abilities of the Drakes is brilliant. Each Drake has an ability that they can imbue onto your character. As you level up, your character can receive more abilities from the Drakes allowing you to mix and match to help you on the adventure. These abilities range from receiving more materials when gathering, to increasing damage output, or outright adding damage buffs such as knockback when using melee. These abilities are incredibly fun to play with, adding another layer of depth.

The Drakes are also able to be leveled up with specified energy crystals you encounter in the world. The energy crystals are specific to each kind of Drake and seem to be level-based. Lower tier gems cannot be used with higher-level Drakes. I did find myself sometimes having an abundance of one energy crystal and lacking in ones I needed. That did make searching for new energy crystals of adequate level tedious.

As Drakes level up, they are gauged based on life span, from infancy to retirement. Once a Drake has been retired, they will eventually turn into a permanent stone shrine in which the player can receive their magical ability at any point without concern of it dying. This was actually a rewarding ending to successfully raising a Drake.

The building is restricted to the vicinity of a specified area which becomes your camp. Like any open world with a camp building aspect, Drake Hollow relies on leveling up in order to have more to work with. The camp building will require materials to craft from wood to metal and electronics and more. Crafting in your camp requires charms which can be earned by holding or interacting with your Drake. The amount and level of these charms are determined by your Drake’s level and how long it has been held.

The game offers a variety of ways to fulfill your obligations to the Drakes such as providing planting crop plots and greenhouses, or an auto-refilling lobster tank for food. Both will achieve the same goal but in different ways and will affect your camps differently. Water, heating, and electricity offer additional methods to power your camp. These utilities are sometimes necessary for buildings to operate. Other building units used to care for your Drakes include bedding and entertainment. 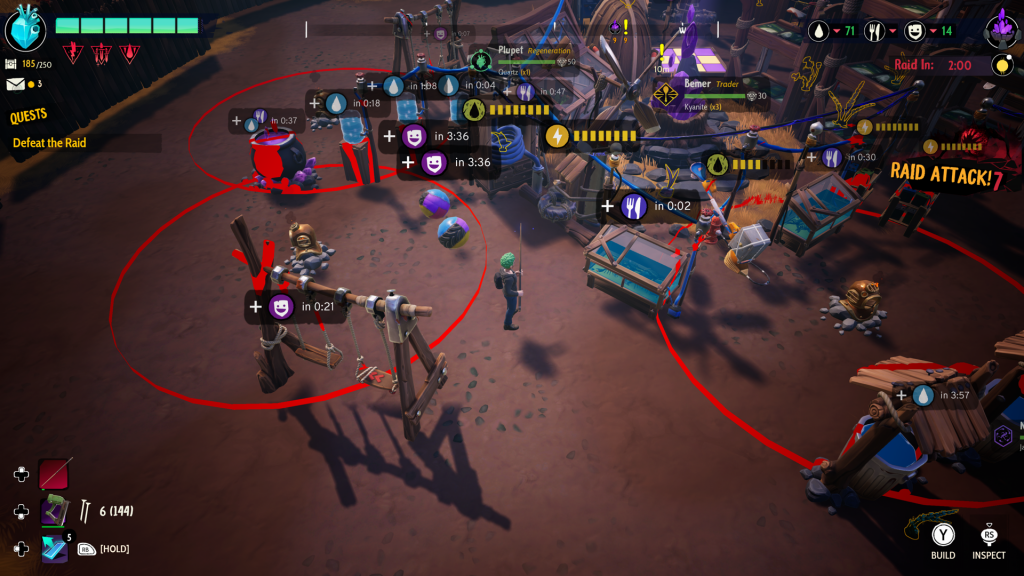 Which brings us to the tower defense portion. Walls, spinning wheels and more can be used to deter enemies attacking the camp during raids. Raids happen randomly as enemies will spawn and threaten to destroy your base, ruining the lives of your Drakes. The game generously lets you know when a raid should occur, but I also found that they sometimes occur without notice. This became frustrating to handle as this would often happen right before, or immediately after a notified raid.

This left no time to repair or tend to Drakes that may need care. On a few occurrences, the raids actually stopped spawning enemies, despite the raid still going on. You also can use a variety of tricks such as alerting items or Drake dummies to waylay your foes. Items didn’t feel very useful as they are easily destroyed or a one time use. Some items themselves seemed to actually be avoided by the enemy AI, resulting in a waste of material. Due to the raids, it is important to take into consideration where you place your items as everything can be destroyed.

In order to build your camp, it means you will need supplies scattered throughout the world. Supply trucks can be found in which you can haul back to the camp through the use of waypoints. New weapons, clothing, schematics can also be found in crates or defeating enemies. Simplicity.

Drake Hollow offers a simplistic form of battling with your enemies. From using ranged tactics to close melee, you will find yourself often changing how you engage your opponents. As you progress through the story, you encounter enemy-types that operate in uniquely different fashions from one another. Small grunts also seem to change their habits the further you progress. This actually was enjoyable as it showed how an old enemy can essentially ‘learn new tricks.’ Other enemies such as Fangs were projectile wielding wolf-like creatures, capable of spawning more grunts. Even as new enemy types appear with subtle differences in attack styles, they all seem to be defeated with the same concept. Attack with a timed dodge, or an occasional block thrown in for good measure.

The game’s loot system is like its combat: simplistic. Loot rarity ranges from common to rare and buff certain weapons to swing faster with smaller damage and others slower with higher damage. Where it gets interesting is that the Drakes can input their own abilities to varying damage output and blocking. Despite the lack of depth, I still often found it clunky to control. It was far too easy to get stuck in a combo without the ability to change direction despite enemies being able to do so. This is a far cry from the fluidity offered by other games similar to the genre. Nothing in attacking is rather impressive, more run of the mill. 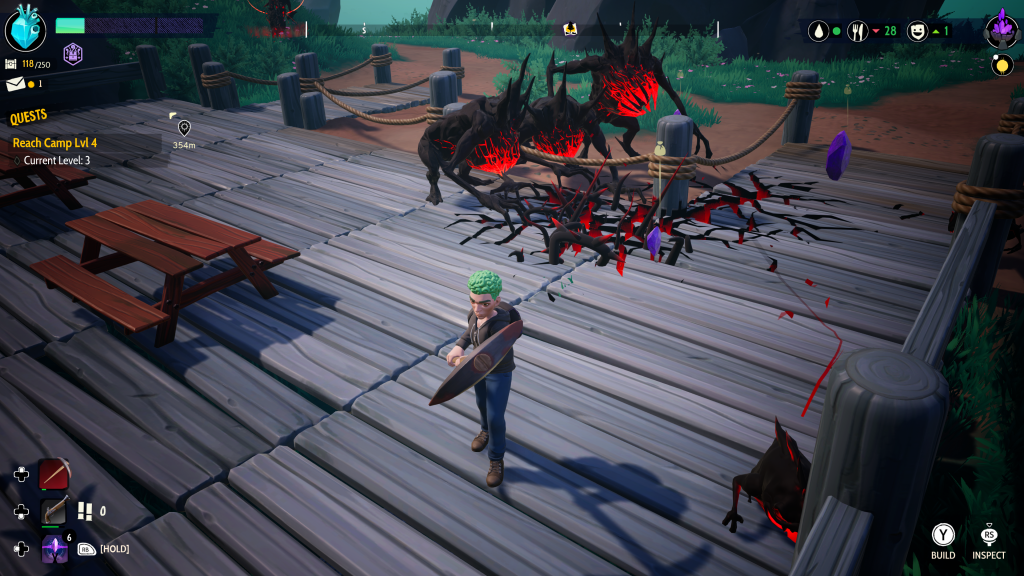 While blocking can be done, I found myself more reliant on the dodging mechanic to evade enemies. This felt more satisfying than attacking in combat as the timing window was tight. Dodging too soon allows the enemy to curve its attack to follow you. It became a true matador experience requiring focus and timing.

As you traverse from island to island, you are charged with removing the infestations that look like large black vines with red spikes. Some infestations appear as an enemy type which spawns more enemies the longer, they last. As you clear each vine, the game notifies you the progress for that island until it is completely cleared.

The thing with Drake Hollow is that it does not require you to complete the entirety of the map in order to progress to the next ‘world.’ Instead, you can move forward at any point after you have completed the main mission line. Worlds are based upon seasons from spring through winter, so progress will adjust the season and different temperaments for caring for Drakes will also change. This provides a different pace for each world; however, to complete the requirement to complete a world does not vary as you are tasked with clearing islands and finding specific spots. Clearing islands can become repetitive, and honestly seem to start to blend together due to lack in variety. 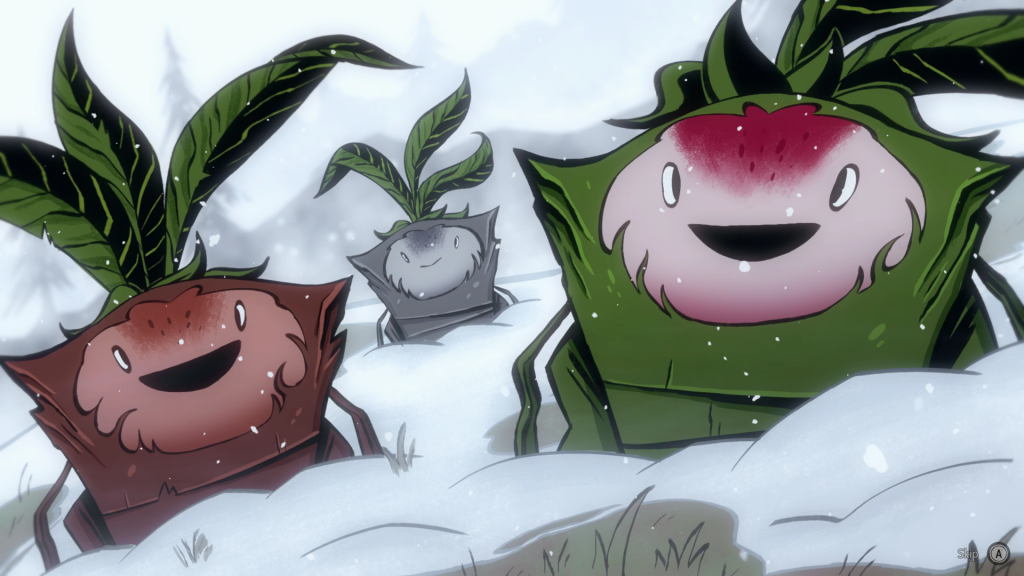 The story isn’t well told and players may miss key points. Each world has a quest giver that comes in the form of a raven, a cat, a goat, and a fox as you progress from each world to the next. From my playthrough, it seems to center around, Sarah Howe, a prior individual transported to the Hollow, and others who are after this individual in a witch hunt-like fashion.

Problems from the Hollow

Drake Hollow is not a terrible experience, but it also is not the best experience either. It does just enough to get by. Most issues I encountered were technical in nature, and therefore could theoretically be patched.

The most frustrating of these were several times I found myself having to restart my campaign or load a much older save. For unknown reasons, the game would glitch out preventing me from being able to progress. Unfortunately, I encountered this three times near the end of the game which is concerning given this is a post-launch build. Similarly, I encountered an issue where raids would stop spawning enemies but were not finished, thus being caught in an endless loop and unable to progress forward. At one point, I had to revert back to a prior save, losing nearly three hours of progress.

Another issue I found seems to be with adjusting options. If it were not for the fact that I play inverted, I probably would not have noticed this. This bug required that every time I loaded my game back up, I had to adjust the inversion look back, even when the toggle stated it was already inverted. This also had to be done when progressing from one seasonal world to another.

With a story that didn’t grab me, repetitive gameplay and some game-breaking bugs, Drake Hollow is really only left with its charm to lean on.  In a genre, where making and deciding your own fun is the goal, Drake Hollow does succeed here, but not in any way that will stick with me. It may succeed further once the Sandbox is available to players. If you want a simple open-world survival, Drake Hollow is something that can fill that void. There is a lack of depth when it comes to the setting of the worlds as you adventure despite seasonal changes. Unfortunately, game-breaking bugs and a bad decision on how to tell the story keep Drake Hollow from achieving greatness.