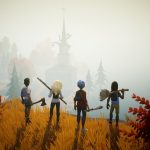 Drake Hollow is a survival action puzzle game that puts players in the role of the protector of an island filled with Pikmin-like Drakes. The Drake’s island is being assailed by a dark force called the Aether. It is up to the player to fight back against it’s influence. With a focus on crafting and novel traversal mechanisms, it looks to be taking the gameplay of Fortnite and stripping it of limitations of the battle royale genre. Drake Hollow will be available for PC and Xbox Game Pass later this year. Check out our full interview with Forrest from developer The Molasses Flood below.