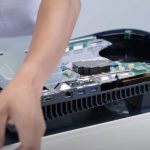 You are reading
PS5 Teardown Dives Into Hardware Design

Nearly a month before launch, Sony has a released a video breaking down the inner-structure and design of the PS5.

On Wednesday, a PlayStation 5 hardware teardown video surfaced online. Vice President of the Mechanical Design Dept., Hardware Design Division of SIE Yasuhiro Ootori hosted the video. Turn on captions in the video to follow along with Ootori-san’s commentary.

To begin, the console is 104mm wide, 390mm high, and 260mm deep, which is larger than the PS4. The rear side of the PS5 has two Type-A ports with SuperSpeed USB 10Gbps support. The rear side also includes a LAN port, HDMI OUT port, and the power port.

The two rows on the front side are air vents with the entire rear side as its exhaust port.

The circular base of the console is attached by a screw. The screw can be taken out and the base adjusted for those that want to place the PS5 on its side.

The white panels on both sides can be removed. Perhaps we can see some panel customizations in the console’s future. Once the panels were removed, Ootori-san spotlighted the console’s fan. 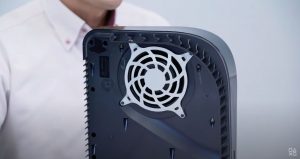 The fan is able to drawn in air from both sides.

As for storage expansion, Ootori-san mentions a M.2 interface with PCIe 4.0 support is installed in the console.

The teardown then begins, first showing off the Ultra HD Blu-ray drive. The unit is covered with a sheet metal case and mounted with two layers of insulators to reduce drive noise and vibration when discs spin.

The PS5 is also packed with Wi-Fi 6 and a Bluetooth 5.1 antenna. 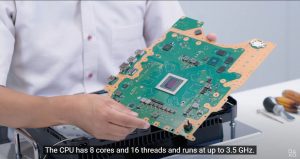 The PS5 has a 825GB SSD with a custom SSD controller that reads speeds as fast as 5.5GB per second.

“The PS5’s SoC is a small die running at a very high clock rate. This led to a very high thermal density in the silicon die, which required us to significantly increase the performance of the thermal conductor, also known as the TIM, that sits between the SoC and the heat sink. The PS5 utilizes liquid metal as the TIM to ensure long-term, stable, high cooling performance.”

Over two years were spent on preparing the adoption of the liquid metal cooling mechanism.

The heatsink was show next. 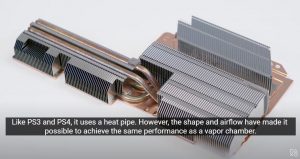 Finally, the power supply unit was rated at 350W. 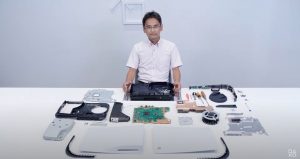 So what did you think of the breakdown?