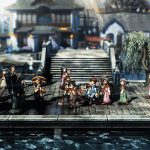 That’s right, Tokyo Game Show will be returning again this year with its online platform filled with plenty of news and announcements. This will have us gamers bouncing with excitement. There will be online showcases, creator exhibits, and even a full VR arena. This means there will be plenty to see and do. Not to mention, sources tell us that we’ll want to pay extra special attention to the 505 Games showcase on October 1. 505 Games is the publisher for the upcoming Eiyuden games. 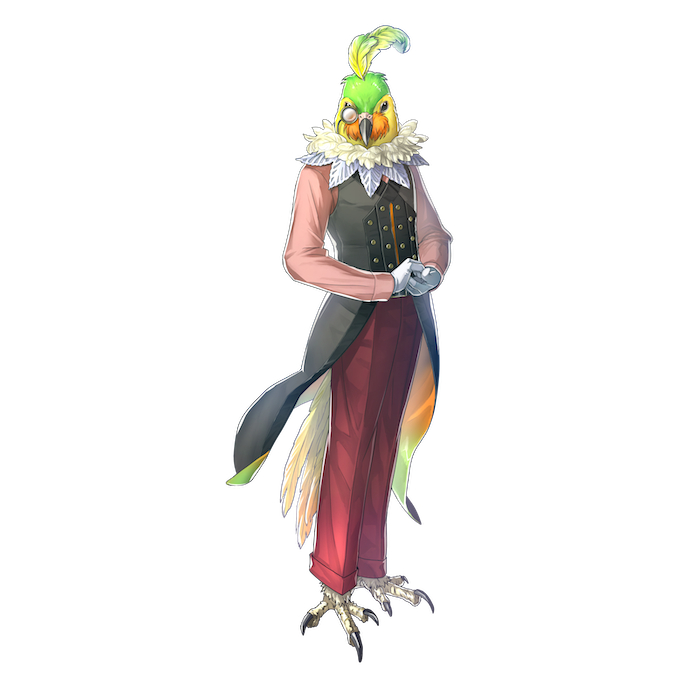 In this character reveal for September 2021 we have finely dressed Squash. Squash is an Ornitha (Bird Person) who likes to peddle accessories in Eiyuden Chronicles. He claims to be a fine judge of his wares, capable of sorting the treasures from the trinkets. Though at times, one can’t help but think that “shiny object” is his sole criterion. Squash is a 44-year-old male that works for the League of Nations. He also favors the consumption of  Spinach Quiche. You can picture him saying things like, “Hmm, well! See this cut here? Classic protomonarchist feature. And this lovely curvature here at the shoulder? Oh yes, worth a hefty sum, I’d say. And it’s so SHINY!”

Junko Kuwana had this to say about Squash’s development:

In Eiyuden Chronicles, the characters’ expressions vary based on their dialogue, so we no longer have to rack our brains finding the perfect expression that’ll fit in any kind of circumstance, whether it be a comedic scene or a near-death situation.  That being said, we’re trying to make sure he has just the right amount of character and emotion for this particular situation, but that alone is already enough cause for me to break down and scream. Lol.  I’ve been trying to come up with facial expressions for this character, Squash, and most of my time is spent wailing in front of a mirror.  But don’t worry, I’ll keep churning away at it!

There isn’t a lot of information on this monster. What we do know is that it is a wraith imbued with a warrior’s soul. Nikkari is said to be strong enough that just one of its vicious strikes is enough to cleave a gravestone in two. This will be a monster to keep an eye on.

Murayama had this to say about the setting of the game:

Eiyuden Chronicles is set in a world brimming with different cultures and races, featuring a rich, diverse range of characters—inspired from all over the world—including elves and avian folk. In my mind, the setting of a game shouldn’t be limited to simply the story and the world itself but also encapsulate all the necessary elements to fleshing it out. There are, however, a few things that the setting should adhere to. One of which would be the technological limitations of a medieval fantasy—ideally, gunpowder should not be commonplace. This is to safeguard how war is staged in Eiyuden Chronicles.

Murayama dove deeper into the war aspect and said:

The emergence of firearms, such as guns and cannons, greatly transforms how war unfolds. To preserve medieval warcraft—the use of close-quarter weapons in the form of swords and spears, and bows and magic—it is imperative that gunpowder remain scarce throughout the world.

If we were to add gunpowder to the world, then we can’t have it rampant; the knowledge and use of it should be restricted so only a few have access to it—for example, have it appear through magical means and only available to magic users.  No matter the case, it needs to be limited so that any individual would not be able to mass-produce it.

An important part to establishing the setting is finding the perfect balance between creating sinister characters who bring a real sense of danger to the world while ensuring that the world doesn’t simply crumble from the weight of it either.

Each monthly update gets better and better. Characters get revealed and aspects of the game become more clear. Best of all, we will all get to play it on Xbox Game Pass.